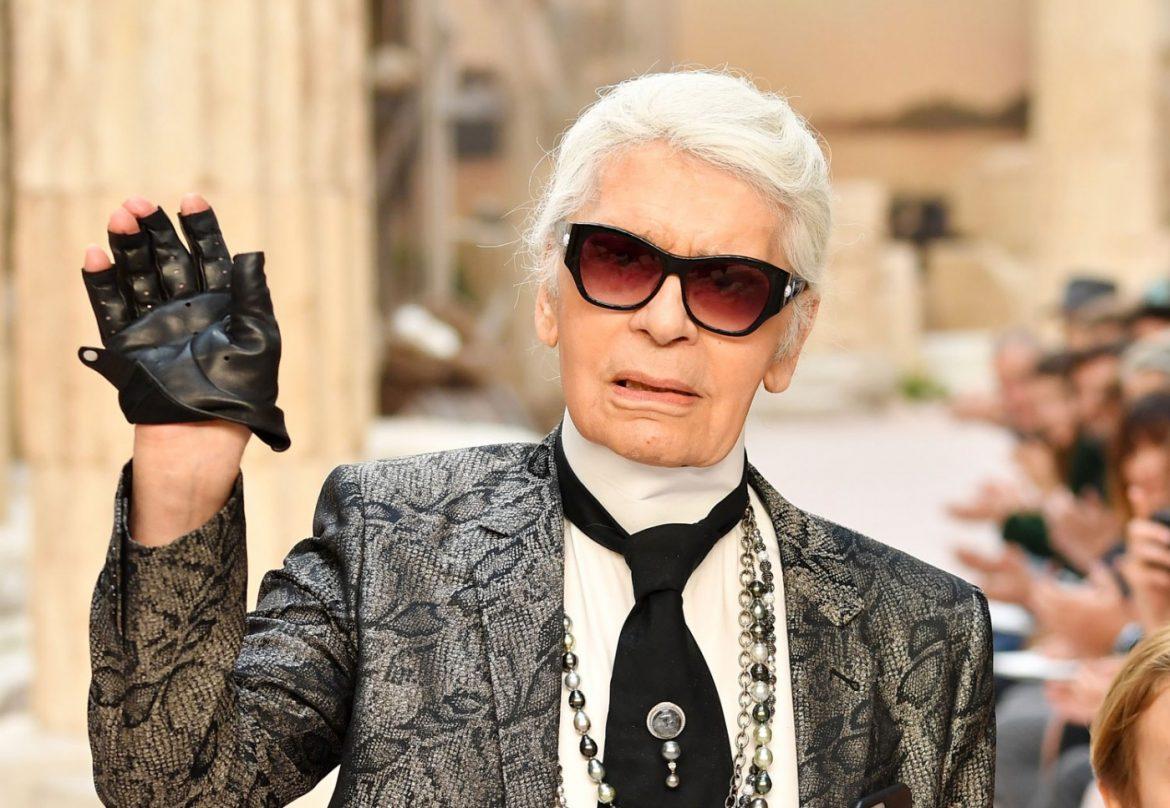 Is Karl Lagerfeld setting sail sooner than we all thought?

Nevermind the full-scaled ocean liner that was plopped down in the middle of the Grand Palais for Thursday night’s Chanel Cruise 2019 show, the real indication was Karl Lagerfeld’s post-show bow which he did along with his longtime fashion studio director Virginie Viard.

Though a Chanel spokeswoman told reporters that the gesture held no real significance, amongst speculative showgoers it seemed to signal Lagerfeld’s imminent retirement and succession plans.

Viard has been Lagerfeld’s studio director since 1987 and is essentially Karl’s right-hand woman. “I make the collections come to life with the ateliers and the Métiers d’Art houses, based on Karl’s sketches,” she told The Telegraph in November. “I coordinate the teams, liaise with suppliers and choose fabrics. Then, of course, I do fittings with Karl. As soon as I receive his sketches, the process begins. I try to please him, but I like to surprise him too.” Perhaps Lagerfeld will get his turn to surprise soon.

Though pre-bow, the set was all anybody could talk about. Lagerfeld took the seasonal term “cruise” literally this collection, with models descending from a hulking ocean liner wading through the soaring space. Among the pretty Chanel ambassadors perched on the show’s front row were Margot Robbie, Caroline de Maigret, Anna Mouglalis, Lily-Rose Depp, and Kristen Stewart, whose longtime girlfriend Stella Maxwell walked the show. 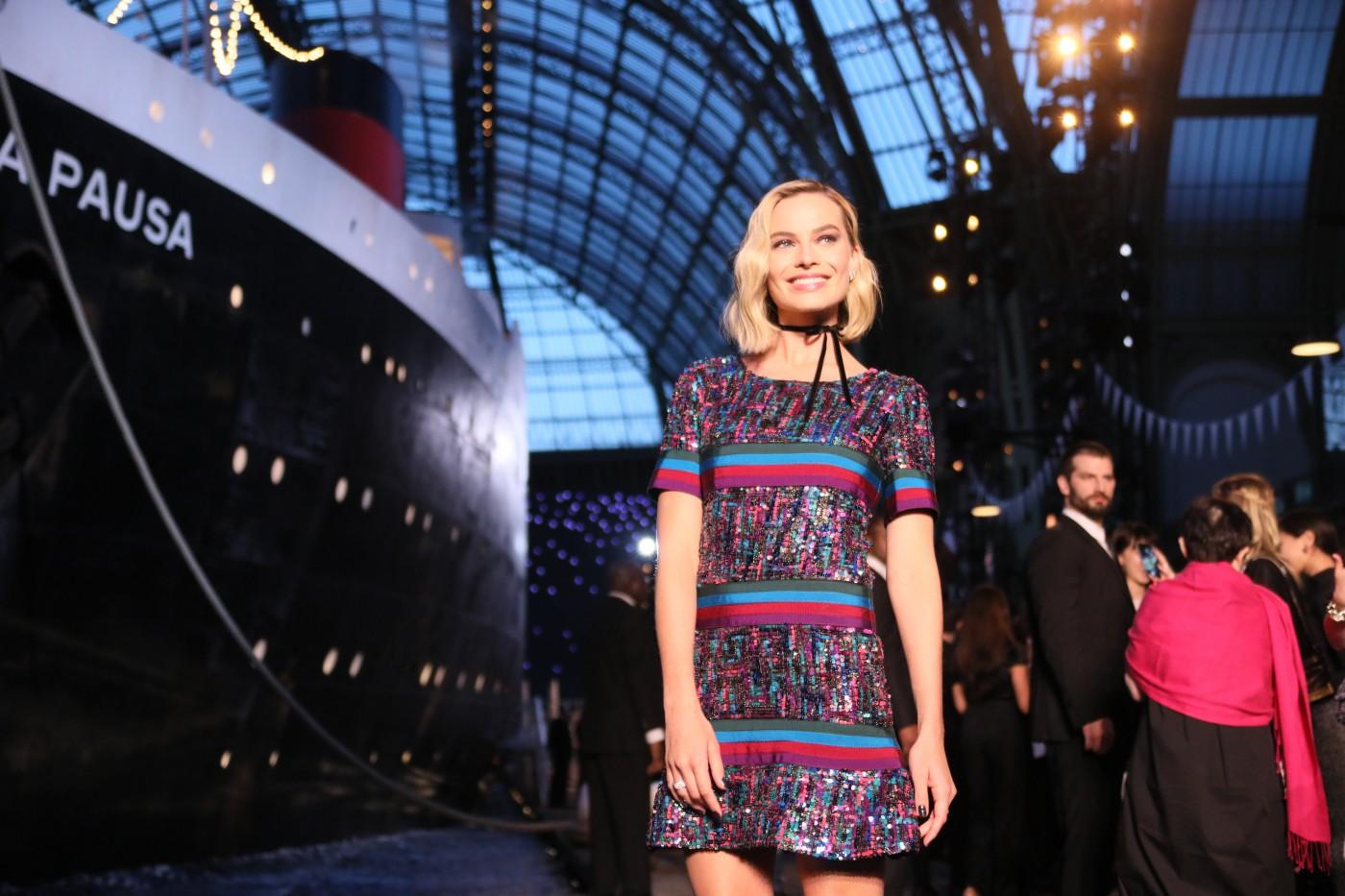 Margot Robbie in Chanel at the house’s cruise 2019 show. 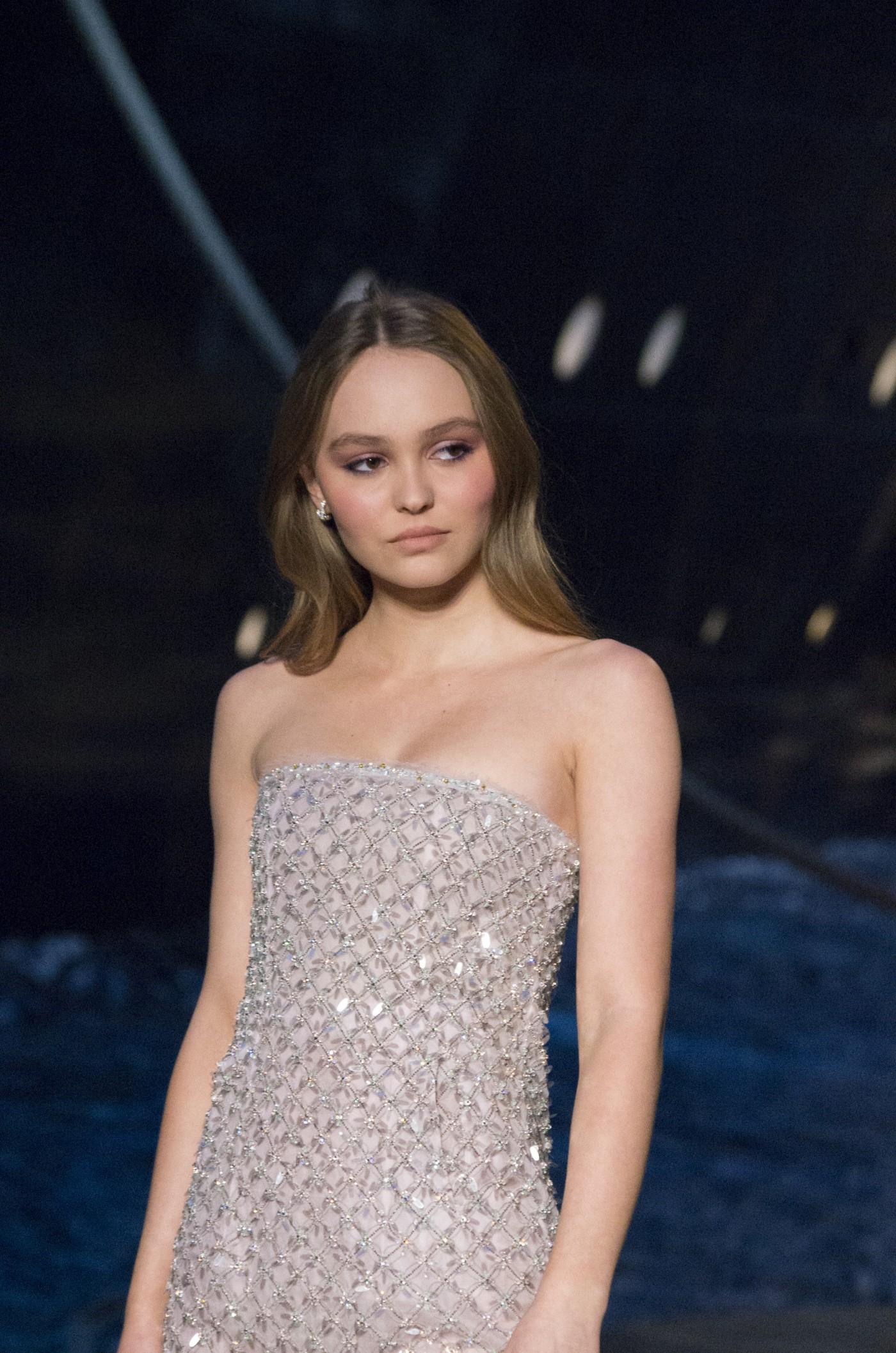 Lily-Rose Depp in Chanel at the house’s cruise 2019 show. 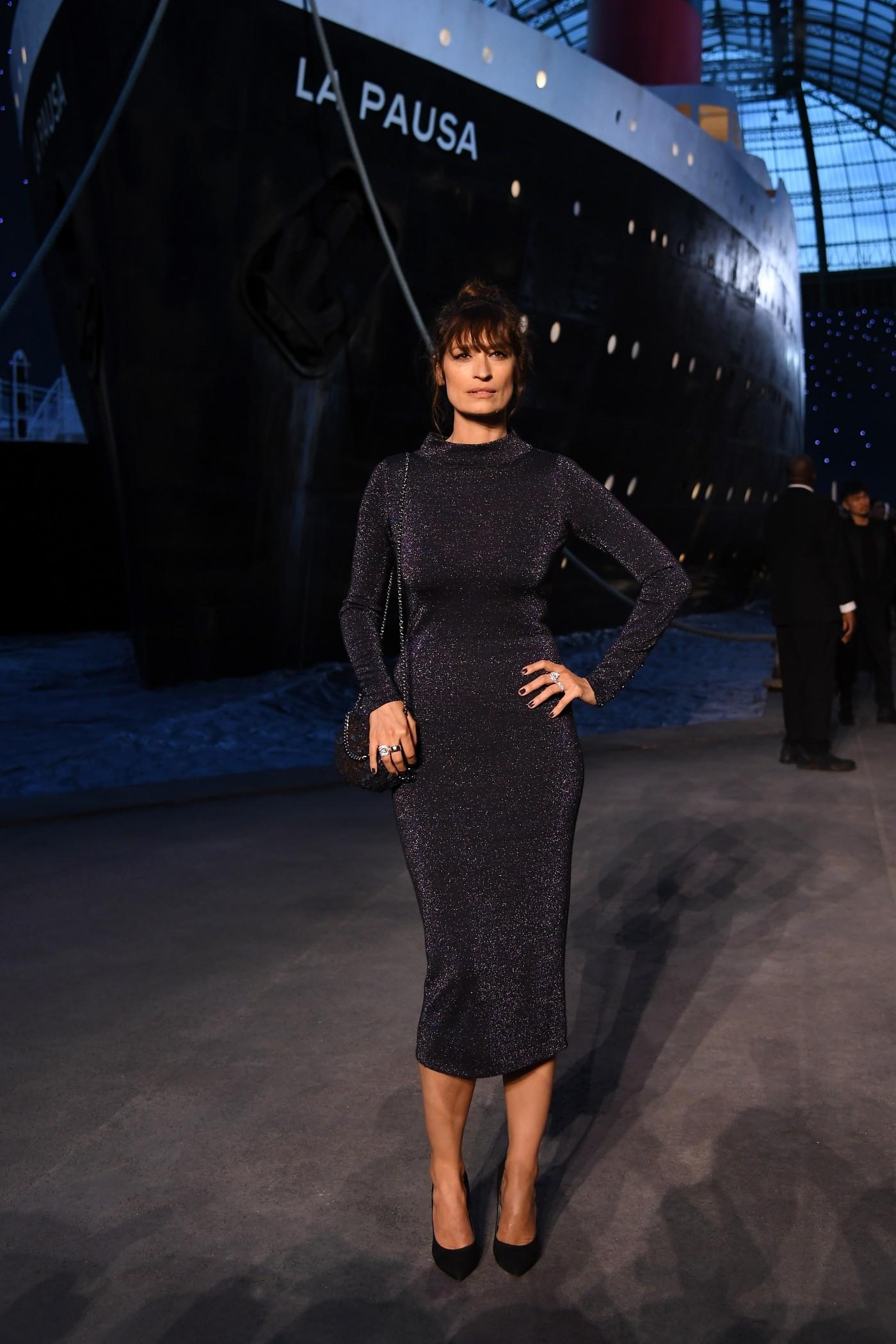 Caroline de Maigret in Chanel at the house’s cruise 2019 show. 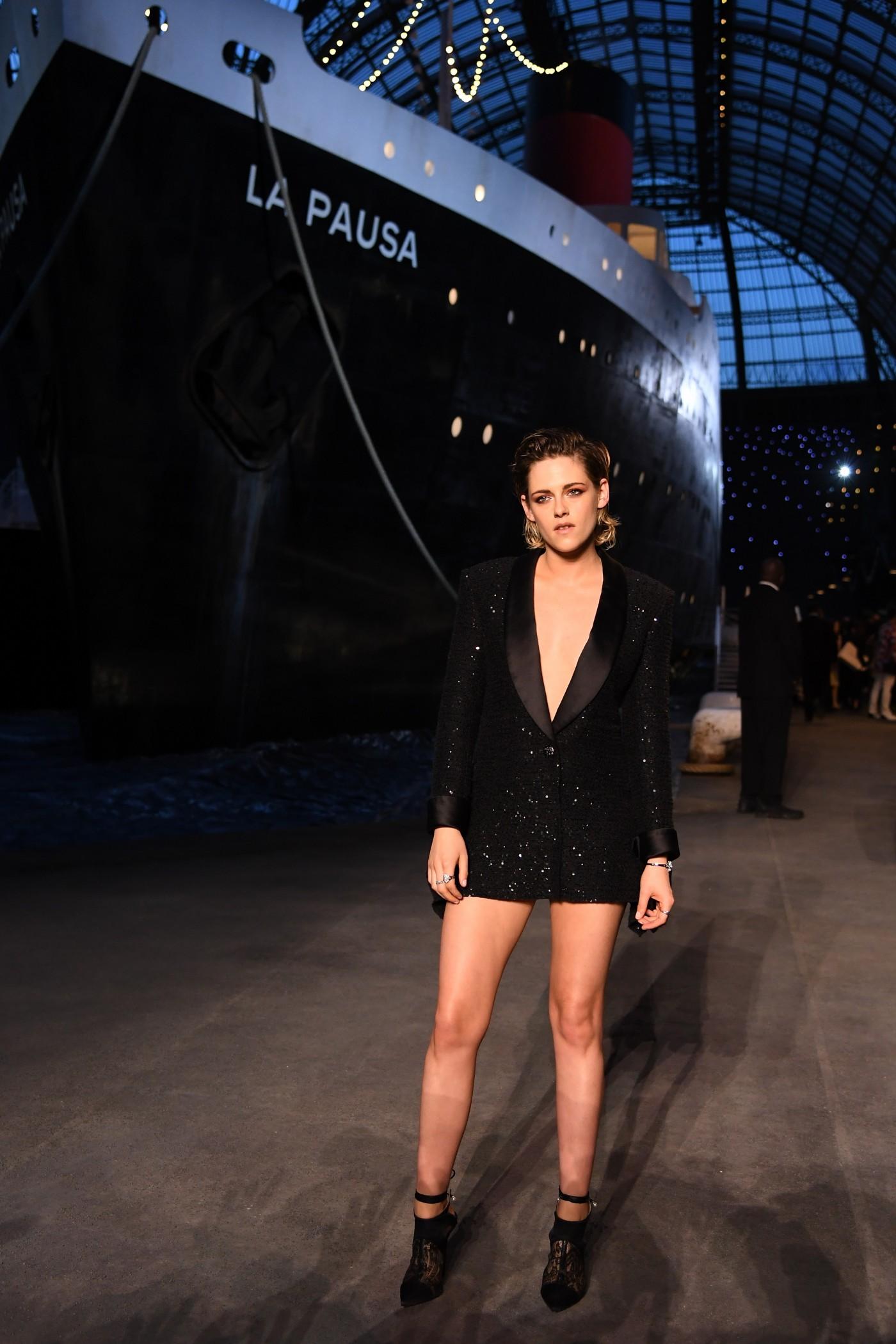 Kristen Stewart in Chanel at the house’s cruise 2019 show.

Chanel has been known to take set design to new heights — literally, when they had a CC-logoed rocket ship blast off from a  launching pad — and Thursday’s massive schooner didn’t disappoint. The boat was 330-feet-long and reportedly took a month to install. The sounds of lapping waves, distant seagulls and creaking ship floorboards added to the sensorial splendor.

The CHANEL liner ‘La Pausa’, named after Gabrielle Chanel’s summer house on the French Riviera, provides the backdrop to the #CHANELCruise 2018/19 show at the Grand Palais in Paris.

The majestic ship, dubbed “La Pausa” after Gabrielle Chanel’s summer house in the French Riviera, wasn’t just a shell. It has an interior set as well; after the models walked the finale, the cruise liner opened up to showgoers who could come aboard, explore the ship’s bowel bowels and, ultimately, take a thousands pics for Instagram. Guests eventually settled onto the boat’s sprawling upper deck for the afterparty, washing down truffle-tinged chips with Champagne and Negronis.

The collection itself, expectedly, took inspiration from the high seas, particularly those washing up onto the beaches of the French Riviera. A fleet of beret-clad beauties in relaxed, nautical-striped sportswear started the show. A spate of cobalt-and-white patterned silks, a requisite smattering of prim tweet suiting, and a lifesaver-shaped purse followed.

So did the bow hold significance? Is Karl ready to retire? Or, knowing Karl’s proclivity for cheekiness, was he just trying to rock the boat?