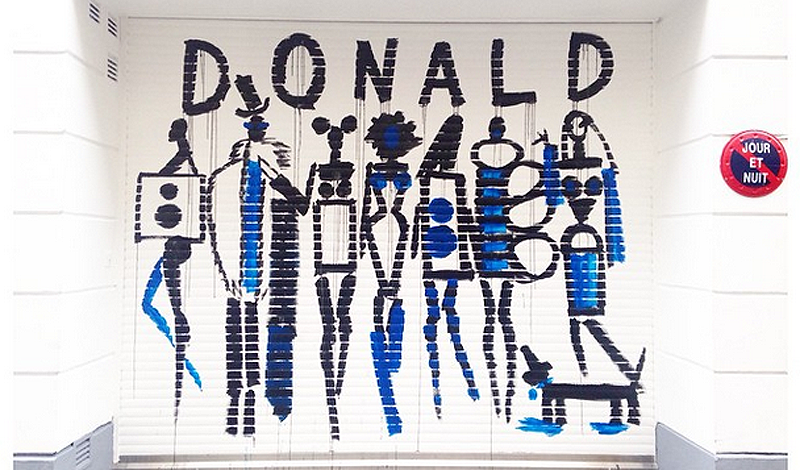 My pal, the wildly popular artiste Donald Robertson (he drew my Daily Davis logo!) was just in Paris, where he took over haute-chic boutique Colette. “It was like a giant art attack on the coolest shop in the world,” Donald tells me. He not only did the windows on Rue Saint-Honore and a garage door, but also customized shopping bags for three hours for a mob of well-heeled and very pushy Parisians. “I was painting live. Or gaffer-taping live, I should say. The day before, I painted the windows and hung my show throughout the store. That store is set up so you want to buy everything.”

Donald’s show is up at Colette through November 1st. He also launched a limited edition lipstick in French flag red, called “Be Legendary”, for Smashbox Cosmetics, available exclusively chez Colette. “I spent the summer in Los Angeles with Davis Factor and his cool crew at Smashbox Studios,” says Donald. “I wanted to bring my friends along on my art attack in Colette. I asked them to wrap little Donald paintings around the boxes and they did. I love it. Tiniest paintings ever.”

Tagged the “Insta-artist” for his more than 95,000 rabid Instagram fans/followers, Donald (a.k.a. Donald Drawbertson”) features fashion favorites like Carine Roitfeld, Tom Ford, Anna Wintour, Zac Posen, and yours truly in his Pop masterpieces.

Stay tuned for a huge project I’m doing with Donald for The Daily Front Row that will launch during Fashion Week next September in New York. He immediately said yes to my crazy idea because he is Canadian and I’ve been told that all Canadians are nice. Who knew? What Donald and I are cooking up is so MAH-jor, so chic, and so super chouette!

P.S. The Gap is launching their #DRESSNORMAL Project in Brooklyn tonight at 87 Havemeyer Street, with a party and music by DJ May Kwok. The five-city mobile shopping exhibition showcases original photography by local artists and was curated by Trish Summerville (of Hunger Games costume design fame) and photographer Tommy Ton, and is open Saturday and Sunday from 11 a.m. – 7 p.m. I plan to dress as abnormal as possible. See you there!

I am in love with drawbertson

I adore him as well! Yay Peter!