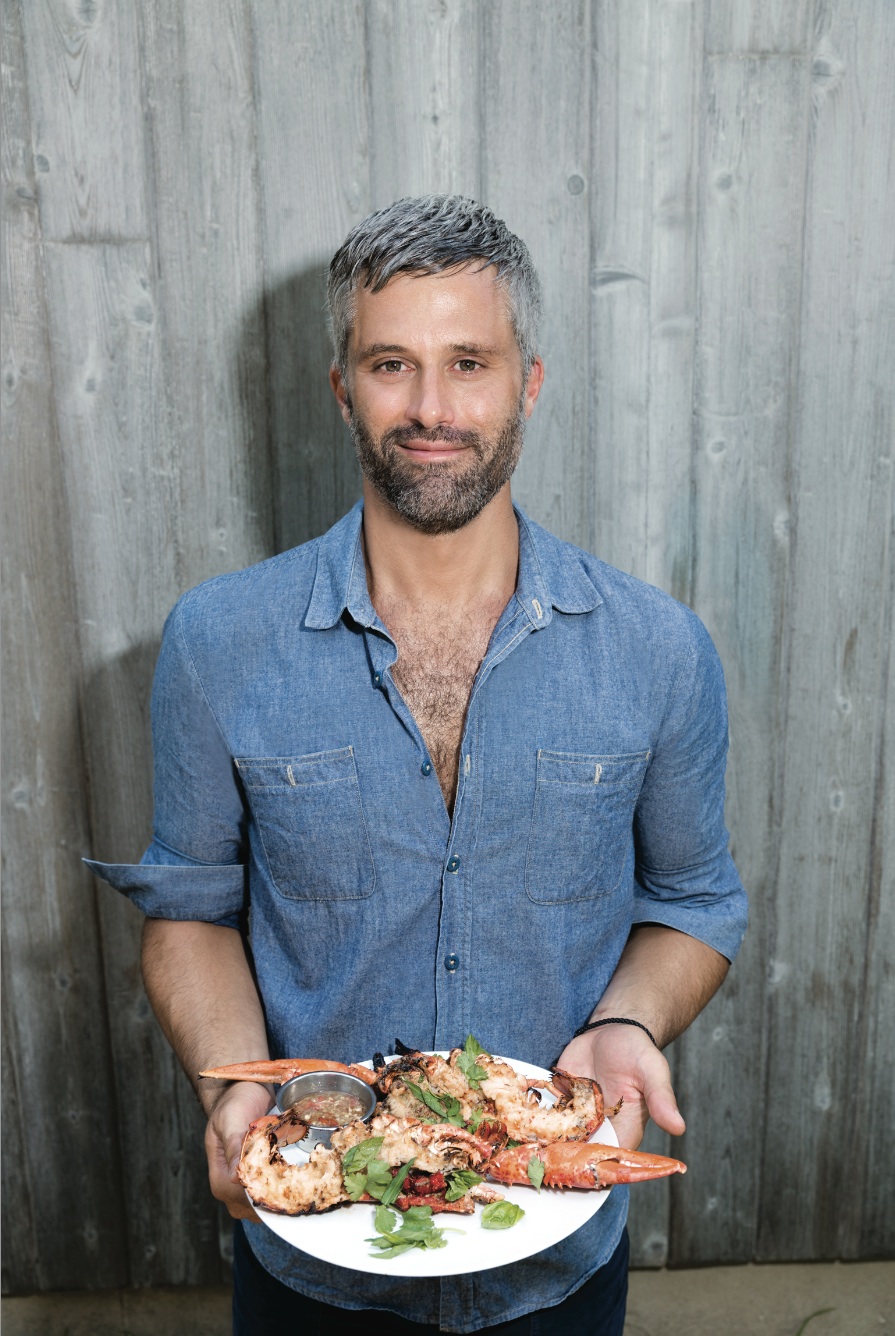 Just catching your breath post-fashion month? Finally, you’ve got time to pore over some of our dishy gems from The Daily in print this season! Bon Appétit creative director Alex Grossman knows a thing or two about food, both on the page and in the kitchen. Grossman hit the grill out in Montauk and discussed his culinary bona fides, glossy résumé, and resto-owning aspirations.
BY ALEXANDRA ILYASHOV

Does your cooking quotient change seasonally?
I cook much more in the summer! A lot of squid happened this summer. I spear-fish, and have been having a lot of luck lately, so I’ve been doing whole, stuffed striped bass on the grill in a foil tent, served with this spicy tomato jam, the recipe for which I got from Talde in Brooklyn. Also, ceviches and spaghetti with clams.

Any great alfresco cooking tricks we can crib?
Eric Ripert buys a piece of slate from the Home Depot, puts it directly on the charcoal, and turns your grill into a 1,000-degree plancha, to cook steak. You can do the same thing with delicate fish, and it’s just amazing. Vegetables, too. I love cooking outside. It makes me want to live in a warm-weather place where I can cook outside all the time.

Sounds delicious. How did you get into food in the first place?
My first job was working as a dishwasher in a restaurant when I was, like, 12 years old. Since then, I’ve probably worked every position you can hold at a restaurant—busboy, prep cook, manager, waiter, captain—except for chef. I’ve worked at Le Bernardin as well as crappy little restaurants. I’ve been a manager and a part-owner; there was a time when I thought I’d be a restaurant owner.

How did your professional kitchen experience help you with this gig?
Working in restaurants gave me an appreciation for food and attention to nuance, and it taught me to really sweat the details. In many ways, the processes and challenges at Bon Appétit are similar to a fashion magazine. Anyone can shoot a picture of a pork chop; readers have cooked and seen them thousands of times. It’s like a little black dress story being done in French Vogue to Redbook. The small choices and styling make the difference in something looking very mass to looking aspirational. We shoot still lifes 95 percent of the time, so we have to create pictures of voyeuristic moments people can imagine themselves in.

How did you end up at Bon Appétit?
This is a job I’d had my eye on for a decade. I never put out feelers for it, but someone who knows me well and had worked with Adam [Rapoport] called me. When Adam and I started working on Bon Appétit in 2011, food had become an important culture and style phenomenon. We made food a lot more energetic, cool, and exciting.

What’s it like working with Adam?
He’s great! He’s loud, funny, opinionated. He talks a lot—at our first couple of meetings, we just talked at each other really hard. I knew he was a super smart, modern editor. I was impressed Condé Nast hired him for this job: Getting a fashion guy to run a food magazine wasn’t the usual move. I knew the magazine would be very cool, voice-y, and opinionated because of Adam.

Between your kitchen stints and your Bon Appétit role, what were you doing?
I was working at AR New York when I got the Bon Appétit job; before, I’d been at Lloyd & Co. I thought I’d left print behind forever; there’d been so much doom and gloom in print in 2008 and 2009. I was at WSJ. at the beginning; I spent about a month redesigning the magazine, and then spent a year as creative director. Before that, I was the launch art director at Cookie starting in 2005. It was a magazine concept that had never been tried before, and parenting magazines at that time were awful. Cookie was awesome—it showed that life didn’t have to fall apart the second you had a kid.

What do you love featuring in Bon Appétit’s pages most?
I love taking the foods everyone’s seen over and over—roast chicken, sandwiches—and showing it in a way that’s hopefully never been shown before. Then, there’s trashy food—hot dogs, hamburgers, ice cream cones—that you can go really weird and more pop-y with.

What’s your pet peeve when it comes to food photography?
I hate when everything is chopped into perfect portions, whether it’s salad, salsa, or soup. Or when people overgarnish things! You’ll see an awesome plate of pasta, just covered with chopped basil. There’s always this need to decorate food. You don’t need to! Those decorations actually hide what’s good about the food to begin with. I love shooting brown food, and not decorating it.

Wait, really?
Everyone always thinks food should be really colorful, but it isn’t always colorful. A good 95 percent of things we crave—French fries, a bowl of pasta, fried chicken, mac and cheese—they’re not garnished! They’re brown foods with texture and fat. The editors are always trying to add colorful garnishes, and I’m ironically trying to make things simpler and browner.

Do you ever eat at your culinary alma maters?
The only place I’ve returned several times—though, granted, not often for obvious financial reasons—is Le Bernardin. I was a waiter there, and I got fired from there. I got into a fight with the maître d’ at the time, an old-school French guy, and he hated me and needed to break me down. I love Eric Ripert, though!

So it doesn’t ruin the experience of dining to know what the kitchen’s like?
No, man! At Le Bernardin, you know everything is very legit. Eric is a genius. In food, little imperfections make everything more interesting. Going there, I just think about how my life has shaken out—from working there as a starving 23-year-old to being the creative director of the best food magazine.

Was your ultimate goal to be the chef?
No. It’s too hard. Chefs work harder than anyone. It’s a big sacrifice. I love food and wouldn’t mind owning a restaurant, but the pressure of being on the line and sweating it out in 120 degrees day after day, 12 to 16 hours a day, is a grind. I’d much rather cook for fun.