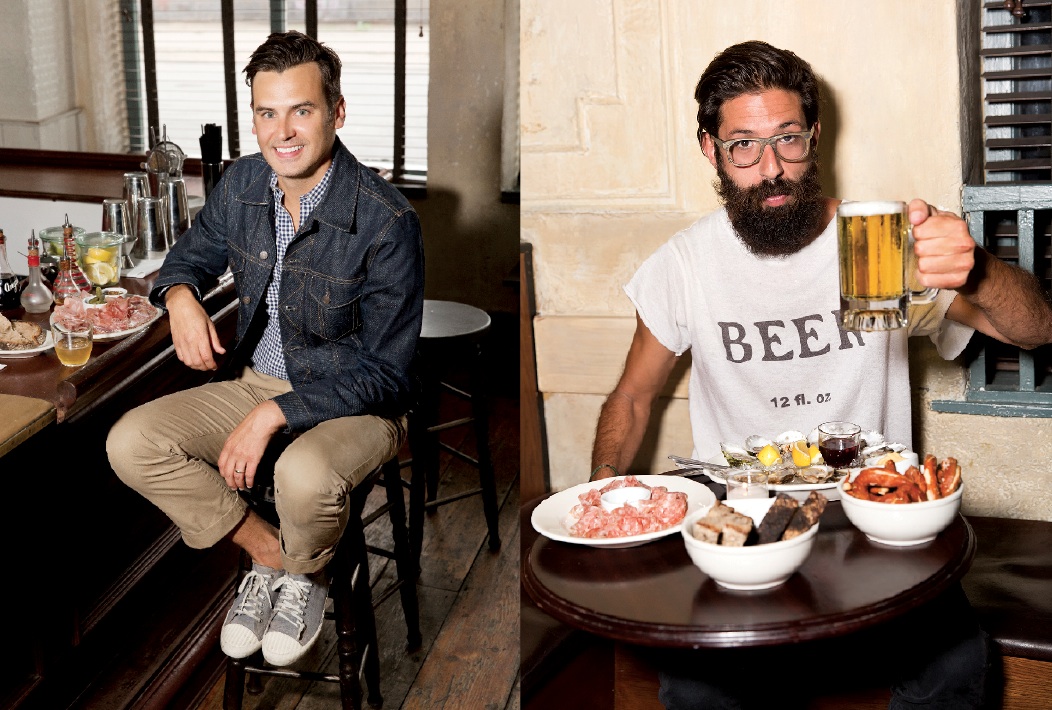 Bon Appétit restaurant and drinks editor Andrew Knowlton and L.A.-based designer Greg Chait of The Elder Statesman dropped by Achilles Heel in Greenpoint for a drink and some charcuterie. On tap? Some bicoastal food analysis, with a bit of style chatter thrown in.
BY ALEXANDRA ILYASHOV

What brings you here?
Andrew Knowlton: I like a good drink, and Andrew Tarlow, the guy behind Achilles Heel, Diner, Roman’s, and Marlow & Sons, has a way of not overdoing a space. His places feel laid-back, cool, and like they’ve been there awhile.

What are your orders?
Greg Chait: A few lagers, hard pretzels with mustard, all their oyster varieties, and sausage.
Andrew: Four Willett whiskeys, a charcuterie plate, and amazing homemade bread. Then some Fernet; it felt like the right thing to do.

Greg, tell us about your food proclivities.
Greg: There’s very little I don’t like, but I eat pretty clean. Not gluten-free or anything like that, but I really pay attention to how food makes me feel. I’m not a big duck foam kind of guy, per se. I appreciate the technique, but I like simple things. My perfect combination of food is Japanese, Italian, and Mediterranean.
Andrew: Where were you raised, Greg?
Greg: My family is South African, so I grew up on a lot of curries and shepherd’s pies. I spent most of my childhood in Paradise Valley, Arizona, so there was a lot of meat. They’re big on steaks down there. My family had a house in San Diego and went down to Mexico often, so we fished a lot. I loved sushi from a very young age.

Any foods you loathe?
Greg: I can’t stand herring!
Andrew: I’m married to a Norwegian, and if I felt that way, I’d be kicked out of the house.

What’s hot in New York versus L.A.?
Andrew: Bon Appétit was based in L.A. until a few years ago; I was in New York, but I’d go there monthly. It was always Eden, coming from way too hot or way too snowy New York to perfect-weathered L.A. Everyone looks like they’ve been picking avocados in their backyards and putting them on their skin daily.
Greg: I do have an avocado tree.

Been anywhere of note out West lately?
Andrew: Sqirl in Silver Lake. It’s quasi-luncheonette, somewhat healthy, somewhat Café Gratitude-y, but less gimmicky. That hippie-ish, hipster, feel-good food has spilled over to the rest of the country. L.A. is the epitome of American dining in 2014: hyper-local, seasonal ingredients, a cultural melting pot, and a certain casual swagger. The city has always been about big-chef restaurants, but lately it’s been about neighborhood restaurants, chefs like Jon Shook and Vinny Dotolo at Animal, Suzanne Goin, and Roy Choi. I can’t keep up now! L.A. has restaurants opening left and right.
Greg: I can’t, either, and I live there! New York is a serious place for fashion or food. L.A. is more free-spirited. That plus talent and fresh ingredients is a pretty good combination.
Andrew: If people are just going to Spago or Nobu, they’re really missing out!

Where’s your must-dine joint?
Greg: You do have to go to Giorgio Baldi every time you’re in L.A. It’s in Santa Monica, and it’s not skippable. That place is part of my L.A. tradition.
Andrew: What’s your order at Giorgio’s?
Greg: It was the Dover sole for five years, and now I do the sea urchin and bottarga pasta. Those are two of my favorite things in the world; I can’t live without them.
Andrew: See? You could do my job, easily! Have you been to new places, like Petit Trois and Night + Market Song?
Greg: I’ve been to Night + Market Song quite a few times. It’s really delicious but heavy food—you’ve got to be ready for it! I like their beer kegs.

How did Angelenos fare in this year’s Bon Appétit’s Hot 10 list?
Andrew: L.A. is very well represented, especially downtown. Grand Central Market made this year’s list.
Greg: I live in Malibu, so downtown isn’t much on my radar. My world is west of Cahuenga.

What should be our next foodie destination?
Andrew: Houston is one of the most overlooked cities. They’ve got expansive ethnic food; great Vietnamese food. And if you’ve never been to Maine…it ain’t year-round, but for three months out of the year, there’s nowhere I’d rather be.
Greg: What’s your favorite burger in New York?
Andrew: For a while it was about the pub burgers, so huge you couldn’t get your mouth around one. Kind of grotesque. I’ve always been a fan of In-N-Out-esque burgers. Corner Bistro was good for a while, and then the people started sucking. Shake Shack has been a godsend to New York. It comes on a super squishy Martin’s potato roll and you can eat it in three or four bites without feeling totally wrecked. For something bigger, there’s the bar burger at Minetta Tavern. The Commodore and Diner in Williamsburg are great too.
Greg: Don’t you find that when you eat clean and then have a burger, the burger just tastes that much better?
Andrew: I binge eat and then binge on trying to be healthful. After a weeklong juice cleanse, a burger is the best f***ing burger I’ve ever had in my life. Even among food people who don’t want to suffer to be “healthy,” having juices a couple days to recalibrate your system doesn’t nix your foodie cred. The older I get, the more I realize I’d rather have as many meals as possible and not die. It’s okay to just order a salad.

What’s your fashion M.O.?
Andrew: I’m 40 and not a slob, but I am a T-shirt, jeans, and sneakers kind of guy. I like to put a suit on sometimes. Once in the while, I wish I was more dandy. Problem is, if I wear a suit to work, I won’t get any work done—people will stop by my office, and point and look at me. All my extra money goes to food and travel. I’ll spend money on nice jeans or a shirt, but fashion is not my first priority.
Greg: That’s okay! If you feel good, you’re fine.