Oh, So That’s How Slick Woods Got Her Name! 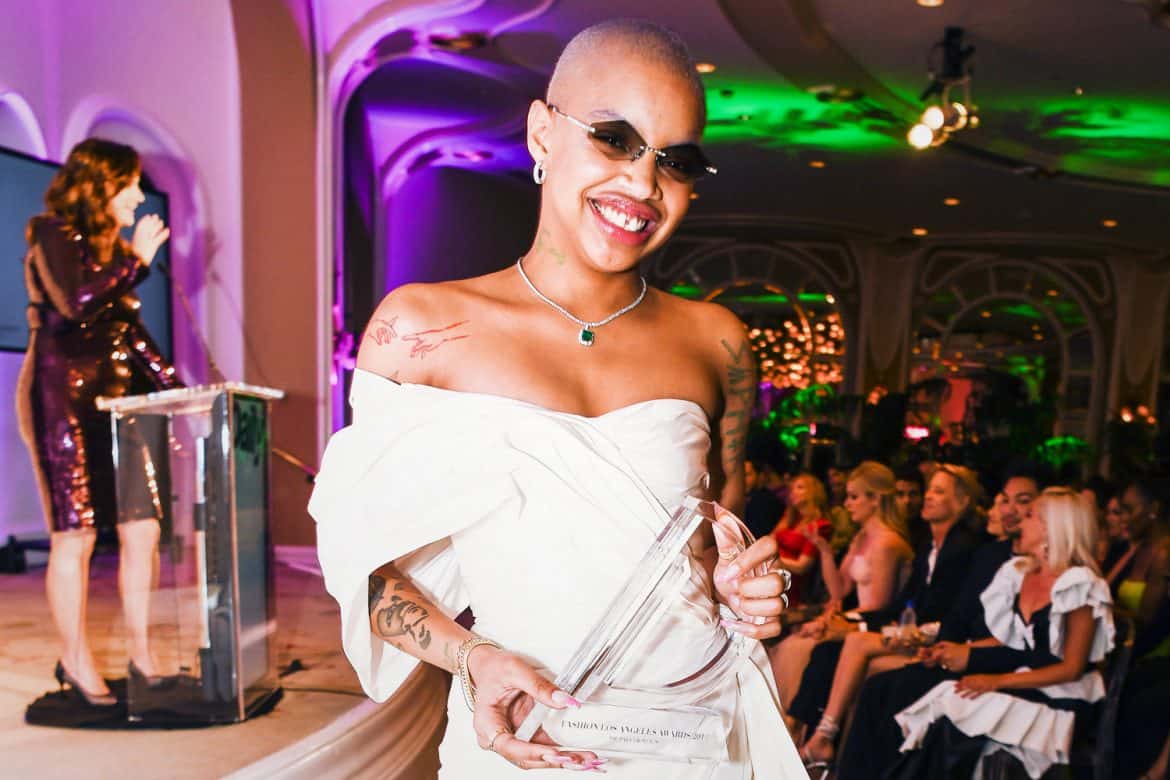 With her gapped teeth, bald head, and unapologetic attitude, Slick Woods is truly one of a kind. The Los Angeles native, who initially captivated Rihanna and then earned the affection of the entire fashion industry, explains how she’s just getting started.

What were some of the highlights of the year?
Wow! All the years have meshed together. It’s been four years [of modeling]! The biggest highlight of the year was having my baby, of course. Being able to walk on the [Fenty] runway pregnant, working on the Fenty campaigns… [Makeup artist] Hector [Espinal] and I have been creative with our looks. I’m dropping a shoe line with The Kooples. I finished my film [Sam de Jong’s Goldie], which was a lot of work, but great. There’s a lot coming this spring.

How has motherhood changed you?
Having a baby has made me feel powerful and more secure. Any insecurity I’ve ever had has dissolved completely. I had a baby! I made a human grow.

How’s the baby sleeping?
Amazing. He sleeps all night. 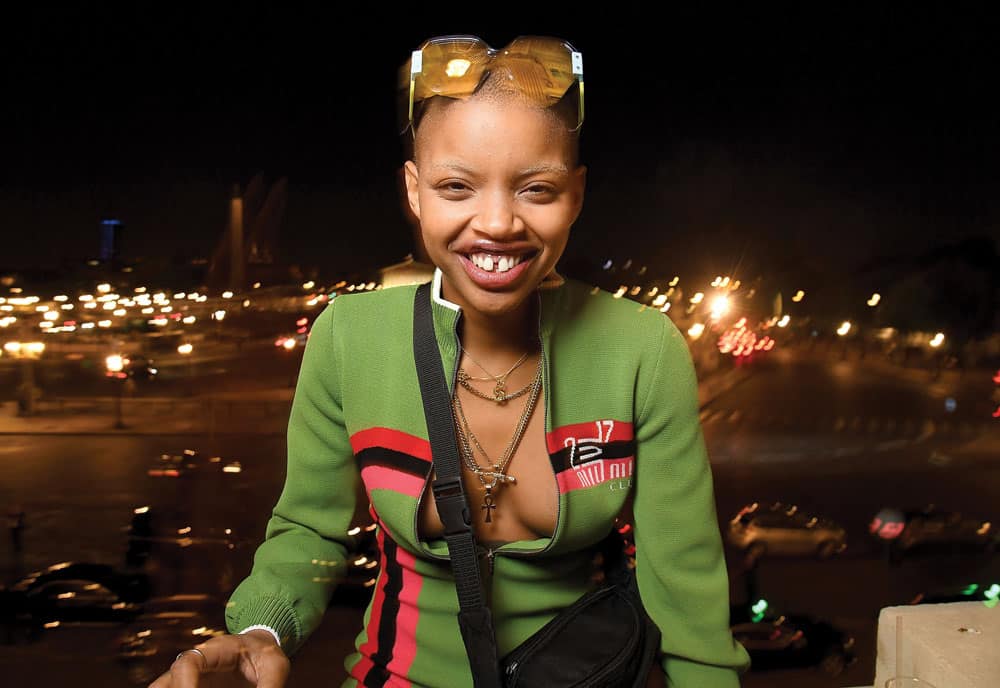 You walked the Fenty show in September while very pregnant. Were you due that day?
I went into labor the day before, but it was walking labor. My water didn’t break, so I didn’t know I was in labor. My son was due 10 days after the show. I thought I had a little leeway. Right after I walked off the runway, I went straight to the paramedics. Eighteen hours later, I had a beautiful baby boy, Saphir.

Rihanna’s been one of your biggest champions. How did you first connect?
Rihanna saw me on her Explore page on Instagram and cast me for her show. The first season, I couldn’t make it, but when I did the show, she came up to me and said, “Let me see the tattoo, bitch.” And then we became friends.

What have you learned from her?
I definitely feel more comfortable in my sexuality and my womanhood being around her. She brings the bad bitch out of me. We pull different looks and play dress up, which is something I never got to do. 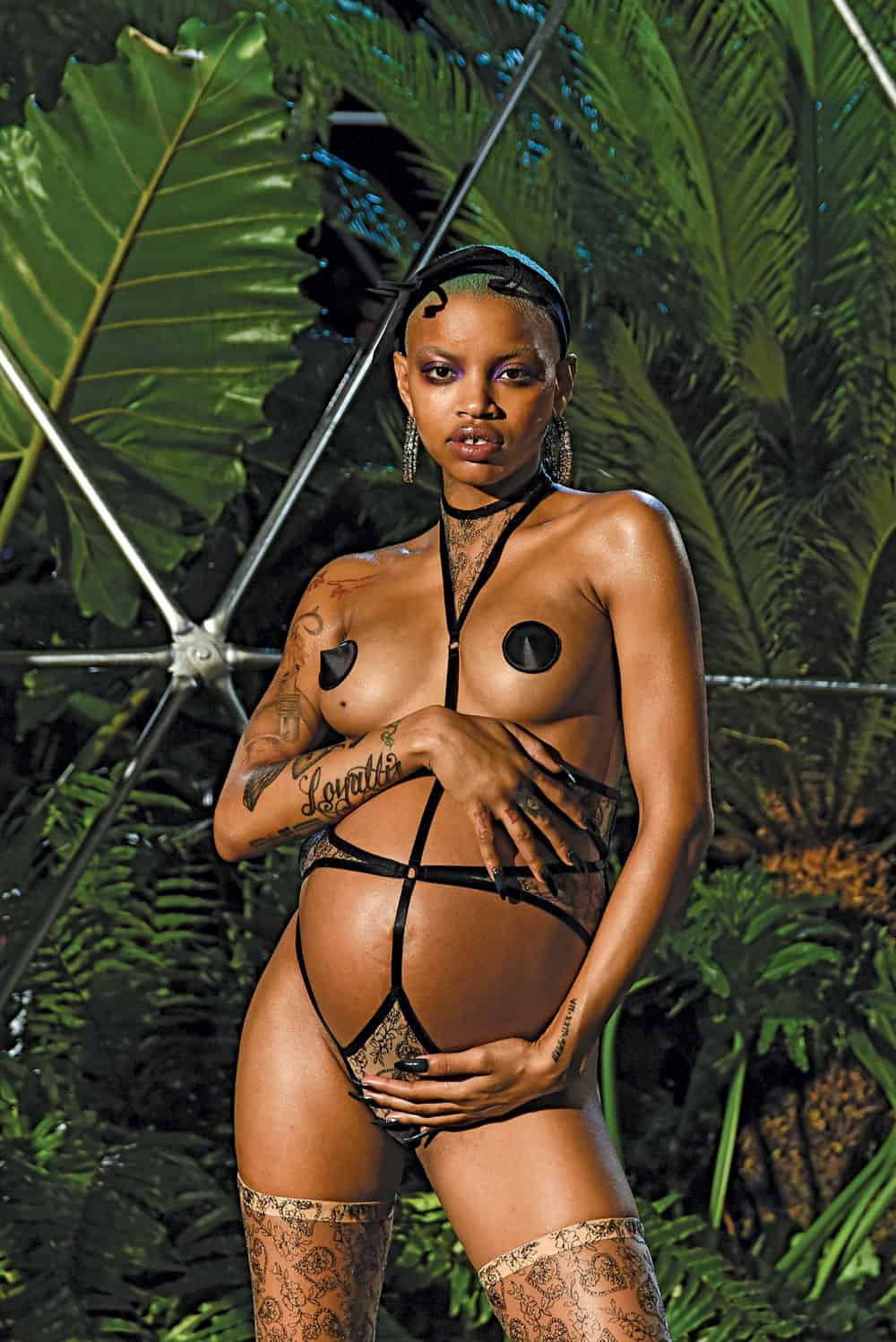 Who else have been your biggest supporters?
Honestly, I’m going to be real with you — I don’t think anybody ever got me to where I am. Growing up, I never saw anybody who looked like me. I never saw anybody from the hood [who] made it out. If I want to look up to someone, I look up to a rapper or some s**t like that. That’s where I come from. When I think of fashion, I think of, God rest his soul, Karl Lagerfeld, and Judy Blame.

Your film Goldie will be released in May. Does acting come naturally to you?
This role was pretty easy, because [the character’s personality] is similar to mine. She was a little more submissive than I would be, which was hard. I don’t really like submissive behavior. 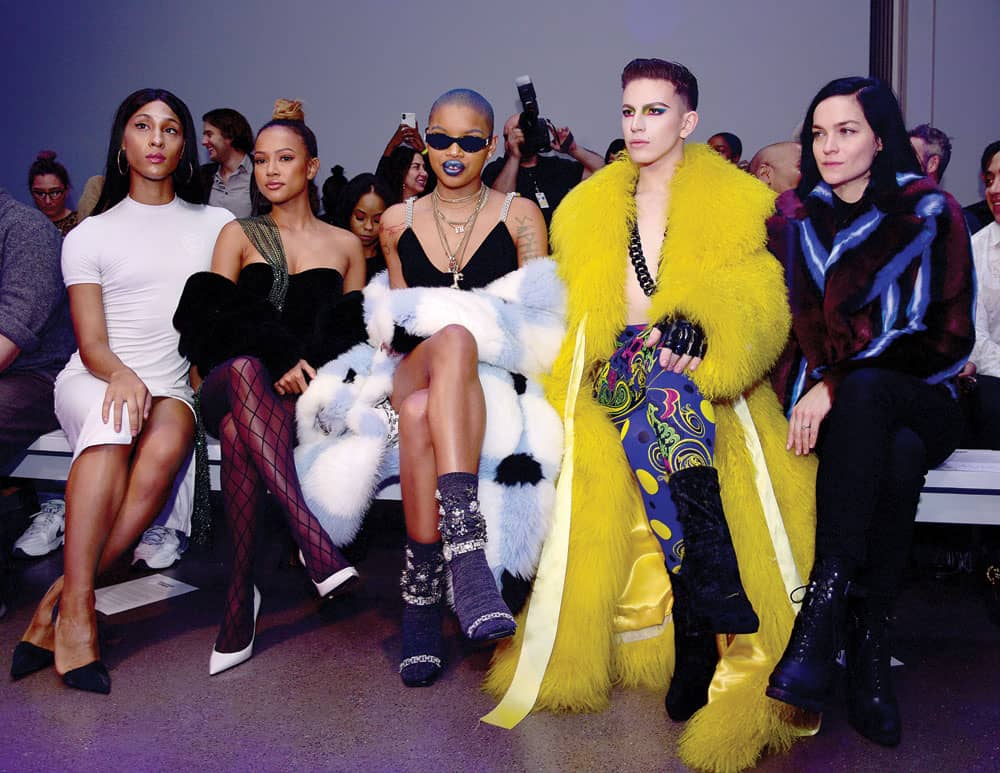 Do you want to do more film work?
I do. I’m going to be in another movie, which I can’t tell you about — we start filming later this year.

What was it like working with photographer Tyler Mitchell?
I love him. He’s lit. He’s young, he’s talented as f**k, he can capture anything, anywhere. He’s dope. He’s so underrated. He’s my friend, so I might be a little biased. He’s ahead of his time. 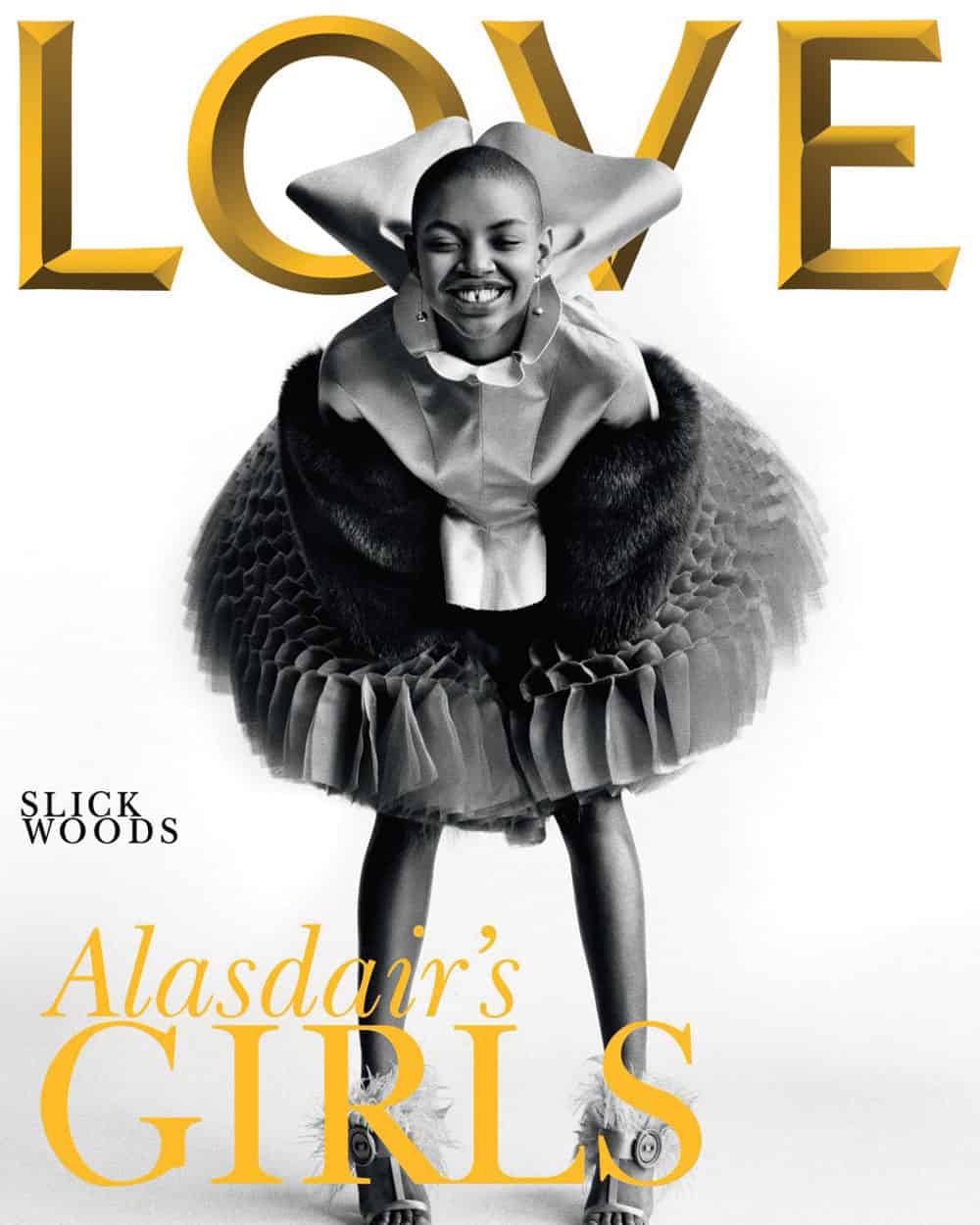 Tell us more about your collaboration with The Kooples.
They’re strap-on sneakers. It’s a Jordan 23 vibe going on, with no laces. There’s a marine biologist type of vibe.

Are you hoping to do more collaborations?
I’m also coming out with my own shoe line.

Where do you hang out in L.A.?
Melrose, Fairfax, Venice Beach. That’s my s**t.

How did you get the name Slick?
I started practicing my rolls, and when I’d roll the best reefs, they call me slick. The backwoods was slick. 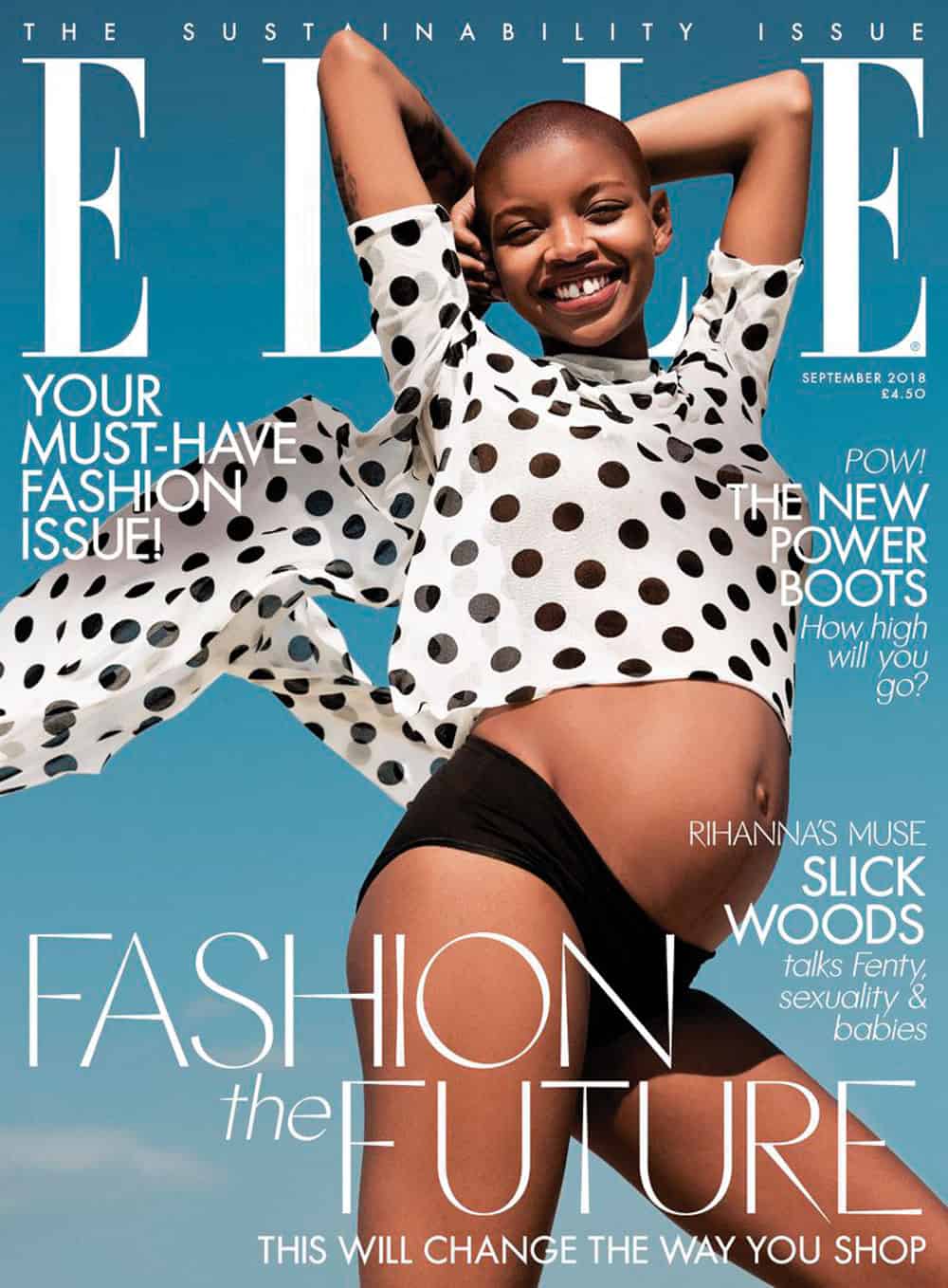 Do you feel like the fashion community has embraced you?
I feel more like a part of the style community. Fashion is what everybody likes at the same time. Style is how you wear it.

You grew up in L.A. and had some tough times growing up. What’s the city like for you now?
It’s a little melancholy sometimes. Everybody’s trying to get a tan or grab brunch and cocktails. I feel it, but Venice Beach was different 20 years ago. It was gangbanger territory. I respect the vibes. I like to be bougie, but I’m a hood girl at heart.

Slick Woods Went Into Labor at the...