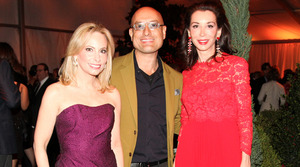 (NEW YORK) Someone forgot to tell Mother Nature on Tuesday that a Fall night in November shouldn’t feel like February. Especially on the eve of Central Park Conservancy’s “Autumn in Central Park” event. Luckily, things were toasty inside for one of the great parties of the year celebrating Manhattan’s crown jewel and raising funds to enhance and restore those 778 acres of green. This year, the event was once again held under a clear tent near Naumburg Bandshell. Event planner extraordinaire Bronson Van Wyck worked his magic, “leaving” no detail unturned. After a cocktail hour and a chance to sponsor your own bench in the park that even Madonna has done, guests sat down for an Abigail Kirsch-catered dinner. (Is there anyone better?) This year Van Cleef & Arpels and Valentino served as the lead sponsors with Gillian Miniter and Sylvester Miniter, Deborah Roberts, Star Jones, Mark Badgley, James Mischka, Fe and Alessandro Fendi, Ashley Baker, Andrew Fry, Trisha Gregory, Alexis Clark, Elyse and Michael Newhouse, Lorry Newhouse, Liz Atwood, and Suzanne and Bob Cochran coming out to support the night that raised over $1 million in green to keep the park, well, you know…Check out our Gallery for pics of the night.

Armarium: Fashion on Loan for the Jet-Set