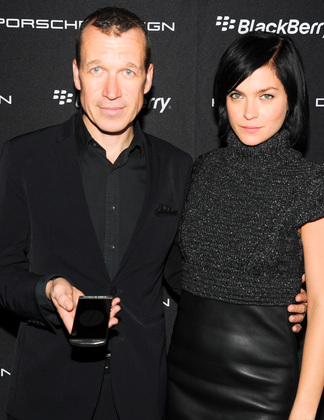 Is your iPhone starting to bore you? Fret not, because last night Porsche Design and BlackBerry launched their latest tech advance, the P’9982. In a sleek mix of metal and glass, the new touchscreen phone will have smartphone owners in a tizzy to up their tech game. At their launch party at Porsche Design’s SoHo digs, all bases were covered: Baron von Fancy crafted the window art, The Misshapes provided the tunes, photog Aaron Stern captured the scene on his new phone, and guests sipped a signature cocktail, cleverly named the P’9982. Towards the latter part of the eve, Patrick Wimberly and Caroline Polachek of Chairlift hit the stage for an abbreviated concert. Other attendees included Stefano Tonchi, BlackBerry’s CMO Frank Boulben, Fivestory’s Claire Distenfeld, and Michael Bastian. After scrolling through the phone’s functions (by the way, The Daily‘s site looks fab on the P’9982), we had a chat with Porsche Design’s CEO, Juergen Gessler. The exec, who was busy launching the phone at Harrod’s in London on Tuesday, has had the phone for three months and is a pro at the sleek device. The big draw for Gessler? “My favorite feature is BBM, especially with the touchscreen keyboard because it types so fast.” Type away!