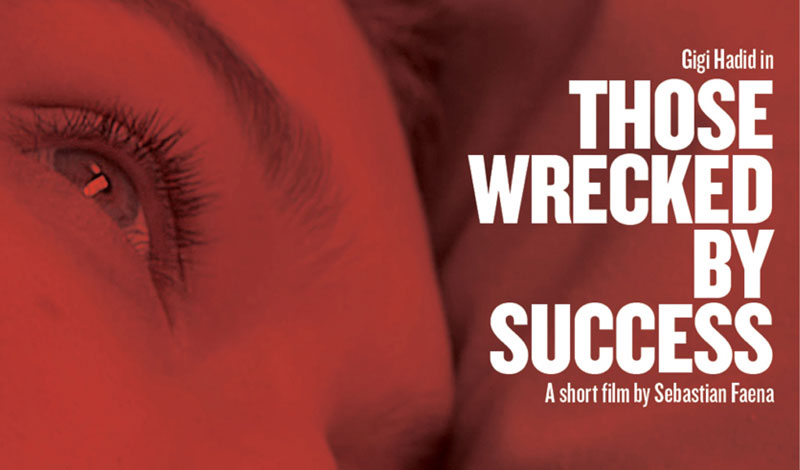 Sebastian Faena is releasing his first short film called Those Wrecked By Success starring Gigi Hadid on VMagazine.com next week. In February, we featured Faena in our media issue for The Daily Front Row during fashion week and he told us he has been wanting to film for some time. It’s not Faena’s first foray into film however; the fashion photographer—known for his work with Carine Roitfeld‘s CR Fashion Book, V Magazine, and many other chic glossies—made his first film in his native Buenos Aires at 23. The full-length film, called La Mujer Rota, was released in 20 to 30 theaters around South America—Mario Testino even served as executive producer. Although Faena’s new film stars model du moment Gigi Hadid, Faena insists it is not a fashion film. “It’s a really beautiful and dreamy film,” said Faena. “It’s about an actress the day after she wins an Oscar. The film is ultimately about refusal. A woman whose life changed completely overnight and moves slowly through her morning, as if she were haunted, or exhausted—trying to remember what is was like to feel.”

Faena says he was inspired by Terry O’Neill‘s iconic picture of Faye Dunaway, taken the morning after she won the Oscar, and the 1975 film Jeanne Dielman, 23 quai du Commerce, 1080 Bruxelles. The latter is a film about a woman who stays at home and goes about her simple activities in a routine that she performs every day of her uneventful life. While Faena’s fashion images have captivated industry vets like Roitfeld, Testino, and Stephen Gan, Faena is first and foremost a film buff. He can rattle off his favorite iconic film makers from Antonioni and Truffaut to Pasolini and Fellini. But in case you are skeptical of Hadid’s acting chops, Faena says they filmed without rehearsing and that, “Gigi was an actress from the first shot, and an extremely talented one. You believe her—the way she looks, the way she moves, the way she speaks—I think people might be surprised by how good of an actress she is.” Faena says he wrote the script with Hadid in mind and that she was the only one he wanted to play the part. “There’s something very real about Gigi,” said Faena. “The film was ultimately inspired by her.” The short film is the first of what Faena says will be more to come. Plus, Faena provided us with a couple of exclusive stills from the film. Check them out!