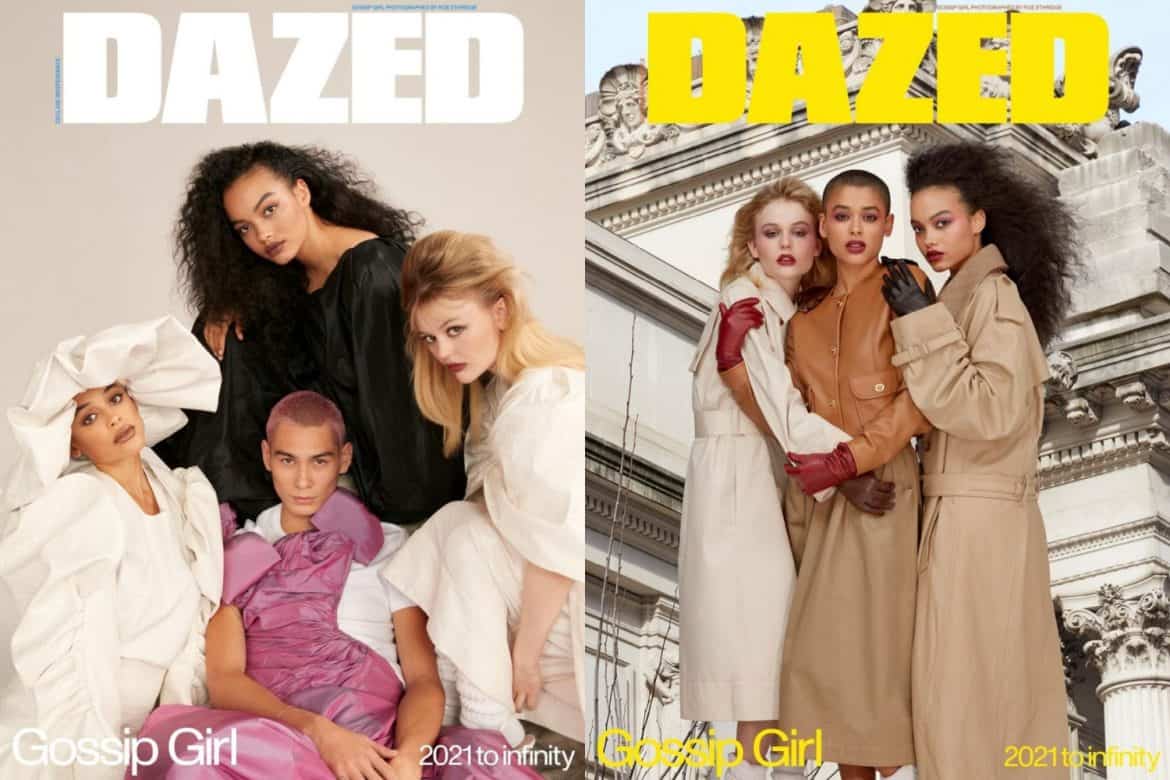 Hello, Upper East Siders! The Daily Front Row here. It feels like just yesterday it was 2007, and we were watching CW’s Gossip Girl on our screens in all its backstabbing, angsty teenage glory. Fast-forward 14 years and the NYC-set drama is coming back with a new crop of fresh faces. Better yet, they’re already making the editorial rounds—as evidenced by the latest cover of Dazed.

Inside the issue, they chat with Colleen Nika on the 12-episode first season and the series expansion, as well as the reboot’s focus on diversity, inclusivity, gender, and sexuality. Of course, some things stayed the same—notably showrunner Joshua Safran, costume designer Eric Daman, and Gossip Girl herself, Kristen Bell, who reprises her voiceover role.

Here are some more highlights from their Dazed interview:

On queer inclusivity: “I think that what we can say is this – we’re making a series in 2020 and 2021. It’s really important for us to not just talk about these things but also express them as normal things that kids deal with. It shouldn’t be this new, exciting thing to talk about, it just exists. It’s about normalising things that used to be different or taboo.” – Emily Alyn Lind

On social media: “It’s not inherently an evil thing, I think it just amplifies issues in our society that already exist.” – Jordan Alexander

On Gen Z dating: “It’s a human Postmates, you know what I mean? It’s so easy to just look at people and swipe. It’s not really about human connection any more. I sound like an 80-year-old talking about how it used to be, but I do think it definitely takes a toll on young people. On social media, you’re never seeing who people really are. You’re really just looking at what they’re trying to portray. That’s something we will definitely be touching on in the show. I don’t think we’re saying, ‘This is bad,’ it’s more an honest portrayal of how it affects them.” – Emily Alyn Lind

Navigating Instagram: “I think it’s dope. I think that Instagram is the biggest dating app in the world.” – Evan Mock

On fashion and “dressing up” today: “You go into your fittings and you just feel like you’re six years old, playing dress-up every day. I wear a lot of vintage and small brands in real life, and on the show there are so many things I would never wear or think would work. But then Eric Daman – who also worked on Sex and the City – works his magic and it’s such a trip. One time, I found out what I was wearing cost $25,000. I tripped over and was like, ‘Dude, can you let me know next time?’ But I guess this is what these kids are used to…” – Emily Alyn Lind

GG fan pressures: “We realised we could take these roles and make them our own – they have their own qualities that are special and differentiate (them) from the original. I think people will relate to them on different levels.” – Emily Alyn Lind

We’re already awaiting the premiere on HBO this year (date currently undetermined, due to the COVID pandemic)—so be sure to check in here for the latest updates. In the meantime, we’ll be listening to “Young Folks” by Peter Bjorn and John on repeat and ordering Ladurée macarons on DoorDash.

You know you love us…XOXO!