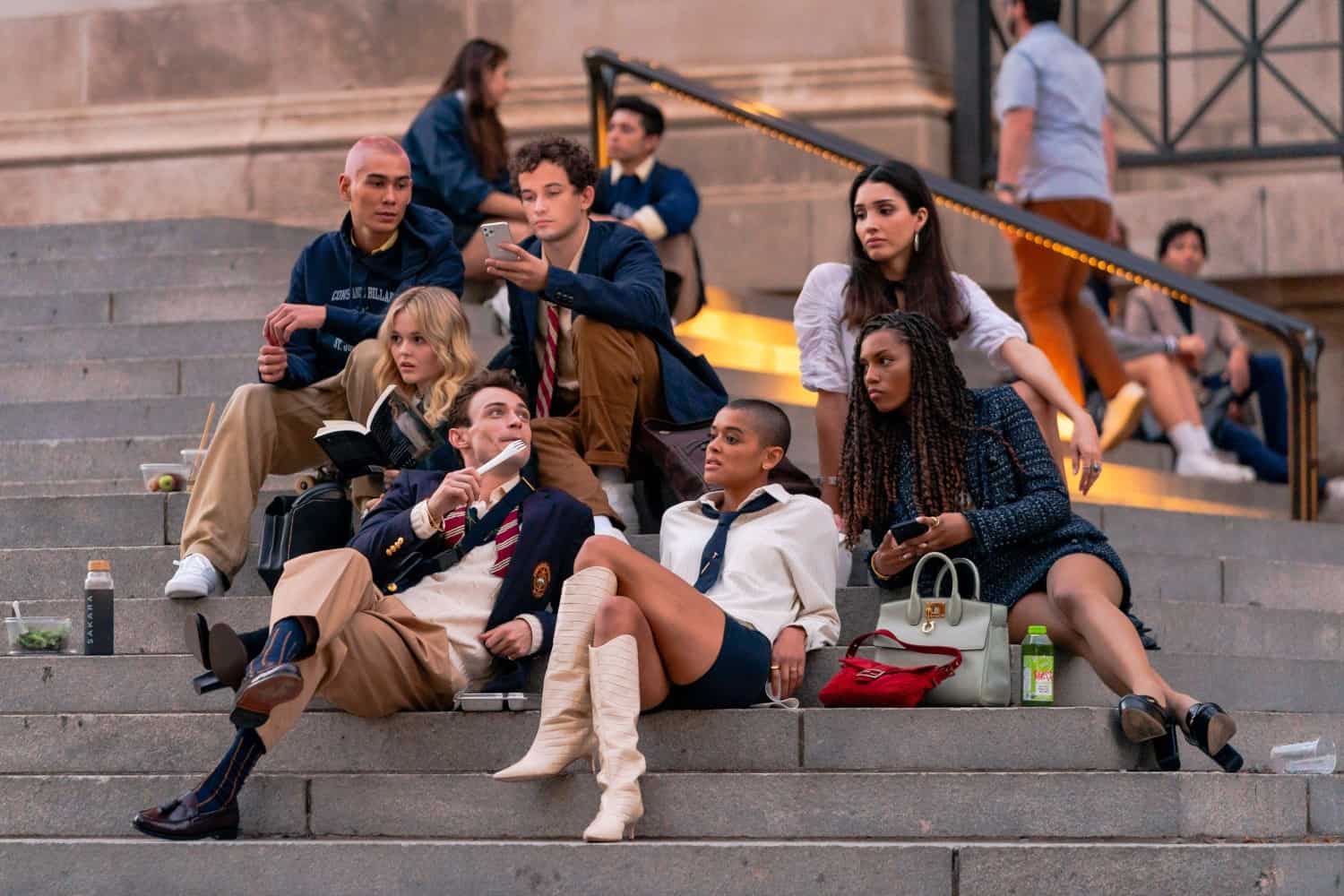 Hey, Upper East Siders! Hold onto your seatbelts—the first full-length trailer for HBO Max’s Gossip Girl dropped at midnight, and it’s a doozy. Allow us to dish on the deets ahead of your new favorite summer binge.

Over clips narrated by Audrey Hope (Emily Alyn Lind), viewers gather the show’s core group of friends has known each other since they were infants. This includes Audrey’s skater boyfriend Aki Menzies (Evan Mock), hedonistic Max Wolfe (Thomas Doherty), straight-laced Obie Bergmann IV (Eli Brown), and party girls Luna La (Zion Moreno) and Monet de Haan (Savannah Smith). When Julien inducts newcomer Zoya Lott (Whitney Peak) into the group, it seems that Gossip Girl is rearing her head once again—this time, as an anonymous Instagram account. But much to our delight, GG is, of course, still narrated by Kristen Bell.

Once Julien pointedly states, “We own this school,” we’re mentally transported back to 2007. Mean girls still rule the halls of Constance Billard, though the school appears to now be co-ed. The steps of the Metropolitan Museum of Art are still the only acceptable lunchtime spot. And much of the main cast’s tropes feel true to their original counterparts; like Dan Humphrey, Zoya is an outsider, and Max’s sharp smiles bring to mind the devious Chuck Bass. Audrey and Julien even seem like modern-day versions of Blair Waldorf and Serena van der Woodsen, respectively.

That being said, it’s 2021—and GG’s gotten with the times. Instead of being a publicized it girl, Julien is an Instagram influencer. Though Audrey’s mother (like Blair’s) is a fashion designer, she dabbles in athleisure instead of high-end womenswear. This show is also produced by HBO, so there’s plenty of fiery sex scenes about to hit screens—initial episodes will apparently feature scenes including groups and male bathhouses, according to Page Six. Gossip Girl might be revamped for the 2020s—but its clique’s notorious scandals haven’t gone away.

One key element to Gossip Girl that hasn’t changed one bit is the glamour. This show focuses on New York’s A-list teenagers, so extravagance is key. There are sky-high penthouse apartments, dreamy walk-in closets, and plenty of wild nights out at bars and nightclubs. Naturally, our eyes were drawn to clips of a high wattage fashion show, where Julien poses in a dramatic checkerboard dress (in reality, it’s from Christopher John Rogers’ Spring 2021 collection). And the fashion does not disappoint—the trailer proves this cast is consistently well-dressed in designer threads, jewels, and bags by Rogers, LaQuan Smith, Fendi, Cartier, and more (all hail Eric Daman!). Fittingly, it’s set to the tune of Frank Ocean’s “Super Rich Kids”— really, what better anthem could you ask for?

However, the trailer’s arrival doesn’t rule out more Gossip Girl surprises. The show’s still filming in New York City, so there’s ample time for more clips, sneak peeks, and paparazzi photos to drop. Plus, Gossip Girl’s gotten a full social media rebrand—and if you’re not following her on Instagram, why bother having an account at all?

The trailer ends with a sultry interaction between Max and Audrey. “Something’s different,” Max purrs. “In a good way?” Audrey asks. Max replies: “In the best way.” Though it’s from a specific scene, we couldn’t help but think the duo’s chat also hints at Gossip Girl’s future. The beloved show, steeped in late aughts and early 2010s nostalgia, might be different in 2021—but thanks to a range of modern upgrades, it’s back and badder than ever. You can be sure we’ll watch to see just how bad—especially once it starts streaming on July 8.

Benny Nisanov: How to Describe your Custom Piece to a Jeweler

Zimmermann Wants You To Go OOO With Resort ’22