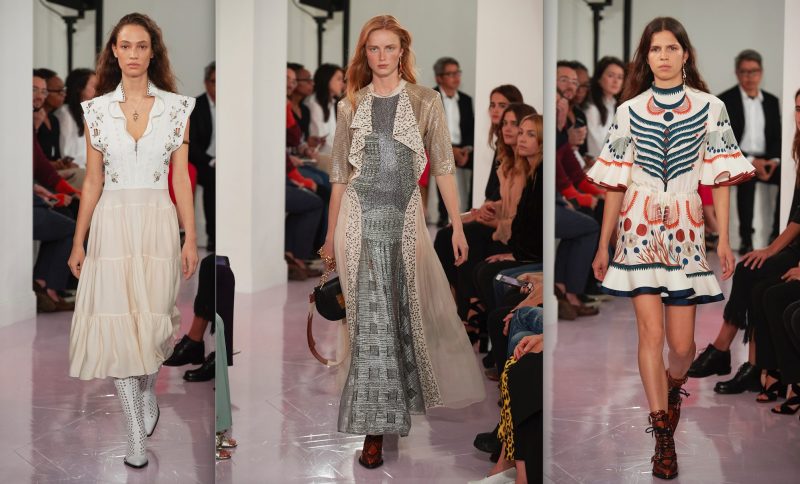 Natacha Ramsay-Levi made her much-anticipated debut at Chloé after departing Louis Vuitton where she worked under Nicolas Ghesquière as design director. She also worked for him at Balenciaga, and her mentor was perched front row for her first collection as a creative director. Ramsay-Levi is the first French woman to be appointed creative director at the brand since 1988 when Martine Sitbon took the helm.

Straight out of the gate it was evident that Ramsay-Levi had hit the mark. Accessories, as everyone knows, are where brands make the big bucks and Ramsay-Levi’s ultradesirable boots are poised to be next season’s “it” shoe. A mix of cowboy, combat, and creeper, the boots came in python, studded white leather, a floral pattern, royal blue, and various shades of brown, and they proved to be just tough enough to perfectly offset Chloé’s soft aesthetic. And the bags? The Drew Bijou shoulder bags with necklace-inspired chains will be found on every fashion girl’s shoulder and are already available for pre-order on Chloé’s website. Knuckle rings were also made in the same vein as the Drew Bijou strap.

As for the clothes, social media is already going wild for the pictorial mini dresses with symbols of fertility, goddesses, and the letter “O,” described by Chloé in the show notes as the “eye letter.” Ramsay-Levi also incorporated some stellar suiting amidst all of the sweetness, like a chocolate velvet number printed with tiny white horses or a simple grey deep-v suit vest with matching pants. Speaking of which, a pair of wide leg camel pants worn low slung on the hips were close to perfect—achieving standout desirability in a pair of simple camel pants is no small feat. On the other side of the spectrum, the floral print prairie dresses are just the kind of easygoing out attire that PYTs will want to scoop up for their endless versatility. This was a lovely debut for Ramsay-Levi.

Playboy Founder Hugh Hefner Passes Away, The Front Rows and Parties of PFW