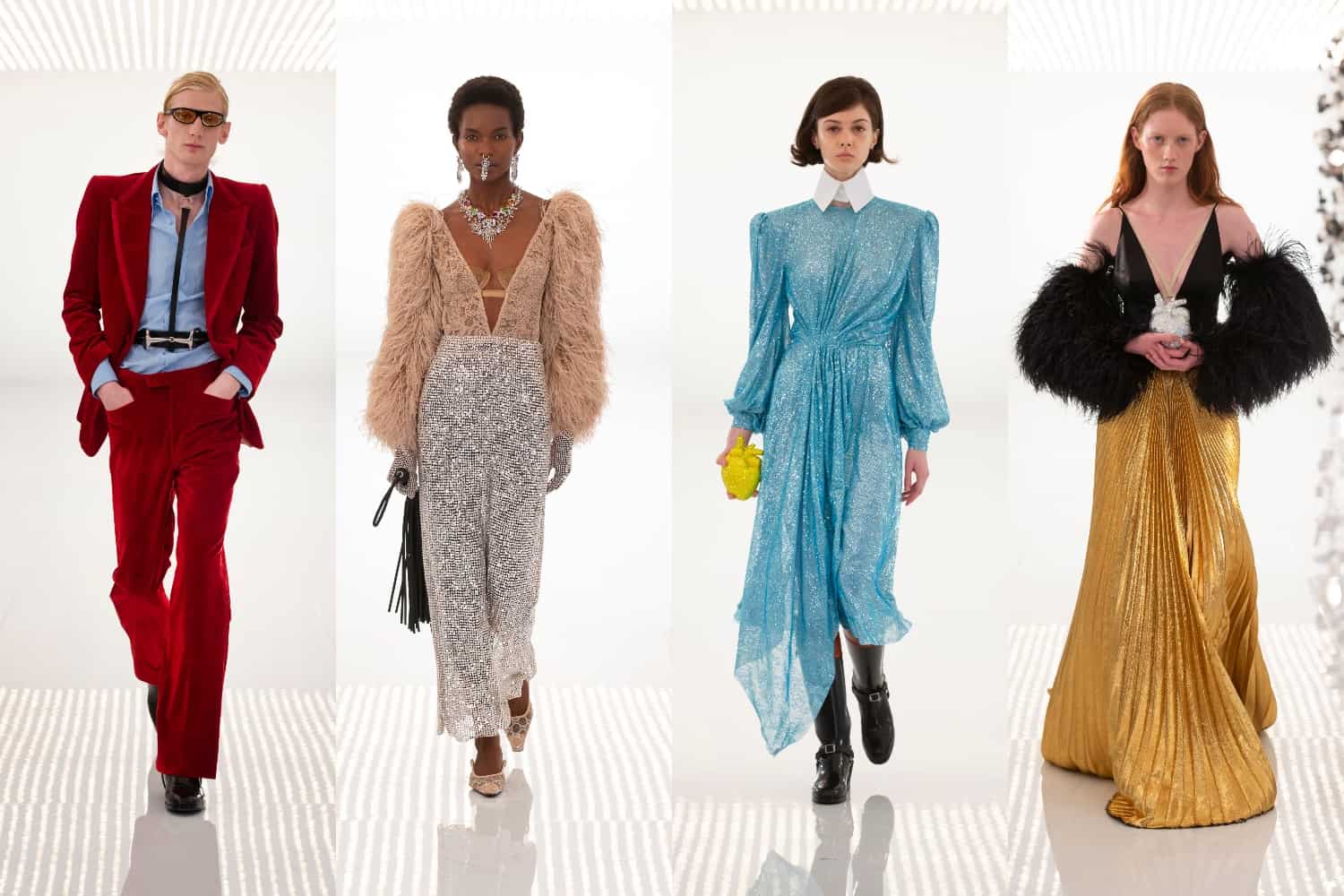 Jared Leto said it best: “People are going to lose their minds.” The longtime Gucci muse uttered these words in a teaser clip shared to Instagram ahead of the Aria collection debut, and sure enough, everyone would soon go a little bit gaga. Celebrating the house’s centenary, Alessandro Michele plumbed the rich archives built up over the last “one hundred spins around the sun” and in order to really mark the milestone moment, he heralded what’s arguably the most megalithic meeting of brands that the industry has ever seen. Balenucci! Galenciaga! Or whatever you want to call it.

Alas, the creative director is slow to call it a collaboration. Rather, in the show notes, he defined the foray into co-branded pieces with Balenciaga as a “hacking lab.” The dalliance between the two Kering-owned brands was rumored all week, and from the offset, the fusion of pieces from such polar opposite labels might have seemed more like a Bride of Frankenstein-type experiment. But like the image masterminds they are, Michele and Demna Gvasalia had the hacking lab under control. And so, the resulting accessories and silhouettes that took on both label’s instantly-recognizable signatures: logo-centric Knife sock boots and Hourglass bags, co-branded suits, and Cristóbal Balenciaga’s innovative bell jar tailoring. These will undoubtedly become collector’s items. As Rachel Tashjian of GQ tweeted, both designers are keenly aware that their young and loyal fan bases are becoming something of amateur fashion archivists. Speaking of! Tell us how to get our hands on these jewel-encrusted heart bags, which are surely going to be museum-worthy one day.

Michele also had iconic styles from the Tom Ford era under his lab microscope. Noticeably, the red velvet suit from Gucci FW ’96, immortalized in paparazzi photos of Gwyneth Paltrow during that time, and revived on the Tom Ford FW 2019 runway on Gigi Hadid. Another noticeable influence was a nostalgic tip-to-toe Gucci shell suit, just like one worn by Lil Kim on the seminal MTV show, House of Style, in 1999.

The 16-minute film (directed by Michele and Italian-Canadian director Floria Sigismondi) began with a model skulking towards what looked like a quiet and abandoned Savoy Club—a nod to how founder Guccio Gucci started out as an elevator operator at the London hotel—until he peeped through the key hole and laid eyes on an enchanted forest. And down the rabbit hole we went, with lights, camera, action and a startlingly-bright white vinyl runway setting jolting us alert. The Savoy reference would become a reoccurring motif, reappearing on everything from helmets to bags and jackets. The equestrian element was impossible to miss too. After all, what comes to mind quicker than the brand’s famous horse bit detailing! Although this time around, it was a sexier, darker, more BDSM-oriented take, if you will, thanks to diamanté whips, leather tassels, harnesses, and chains a’plenty. Indeed, literal horses would rear their head later, when the Gucci Gang united in Nirvana for the finale. While we’ve all gotten used to the maximalist lens that Michele has interpreted Gucci through since he took the helm in 2015, this was a different direction. Gone were the styling cues we’ve come to expect (sort of an eccentric art teacher who stumbled upon a treasure trove of your grandma’s heirlooms) and in their place were more block colors (hello, Balenciaga royal blue and fuchsia), languid suiting instead of 1970s tailoring, and a new emphasis on things like feathers and sequins over the expected Baroque and floral prints.

Alongside its inward references, this reflective offering proved how under Michele’s direction, Gucci has transcended fashion and truly become woven into the fabric of pop culture. Case in point: the series of Gucci-related songs utilized in the epic soundtrack! While he’s abandoned the traditional show schedule, the designer reiterated what all of his industry peers had to say in terms of getting back to business as usual. “Here we are then, ready to celebrate, wearing our most glittering clothes. Preparations for the event are in full swing. We are eager to walk through the Savoy’s doors again, one century later: an immaginific topos in the history of Gucci.”

Punctuating the dream-like forest rave sequence, the viewer could hear the electro beats of Vitalic and David Shaw and the lyrics “What the future holds” and “Waiting for the stars to align.” Thanks to two of fashion’s biggest and boldest meeting in the middle, it feels like we already witnessed such a seismic shift. We don’t need a telescope to know that the future is bright for Gucci either.

Aidan Is Back! John Corbett Will Star In Sex And The City Reboot