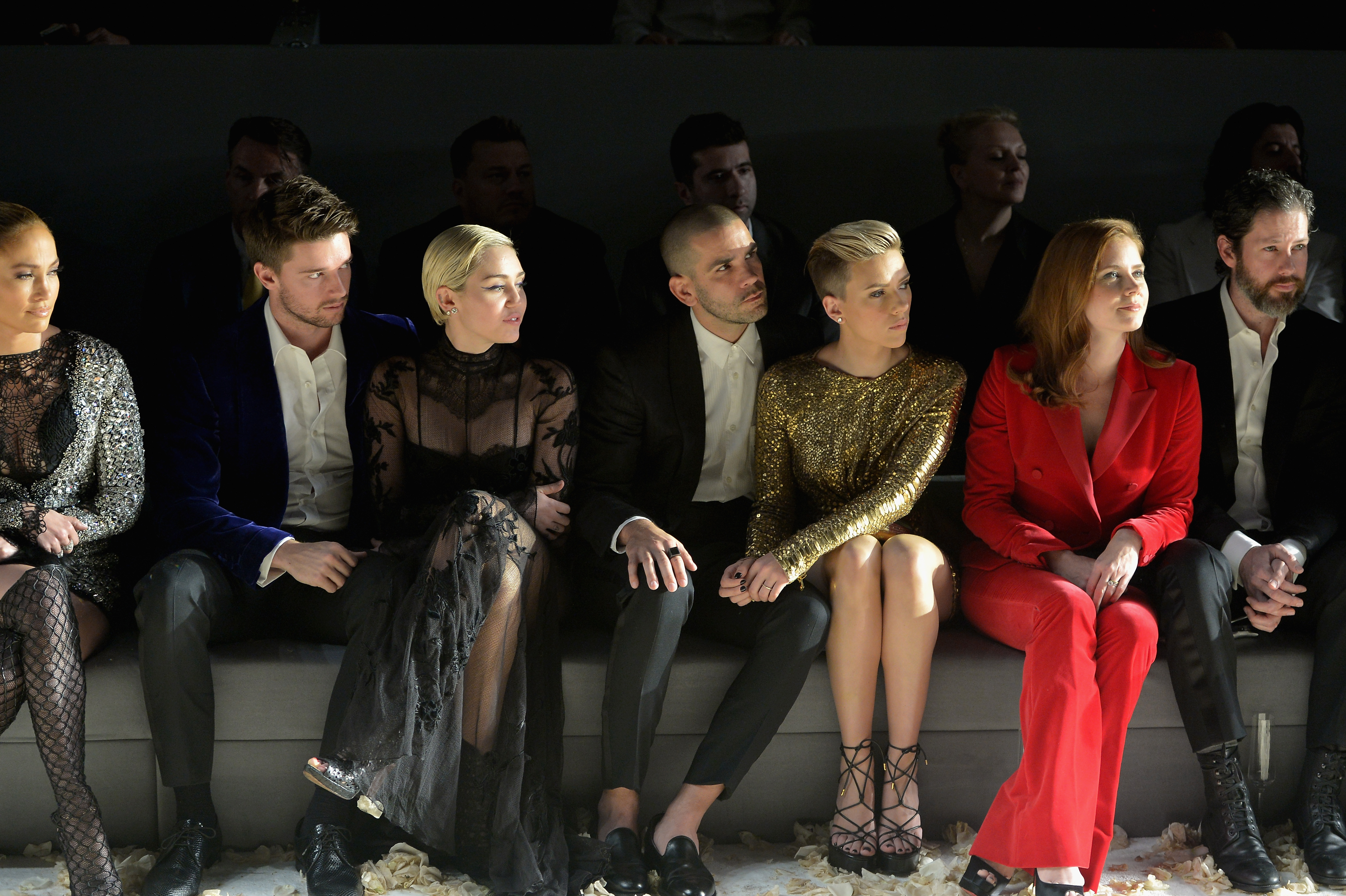 Oscar glamour came early this year, to Tom Ford’s runway show, held for the first time in Los Angeles at Milk Studios. The space was staged to look like the Tom Ford show venue in London. In section E, row 1, Anna Wintour sat next to Gwyneth Paltrow, who was next to Ford’s husband, Richard Buckley, whose show neighbor was Julianne Moore, who sat next to Reese Witherspoon.

“The first time I met Tom was when I had dinner with him in Santa Fe,” Witherspoon told The Daily. “He was having a party at his house. He is so lovely and generous. He and Richard are just so wonderful.” Ryan Murphy recalled his own first Ford encounter. “I went out and splurged on a Tom Ford tuxedo to wear when I was nominated for my first Emmy for the pilot of Glee,” he says. “I ended up winning. So I wear Tom’s clothes a lot when I go to awards shows.”

Male models carried large boxes filled with white rose petals and literally blanket the runway and everything around it. The air couldn’t have possibly smelled sweeter, much like one of Mr. Ford’s coveted fragrances. Across from section E1 was section B1, where Josh Duhamel and Fergie, Amy Adams (in a TF red velvet tuxedo), Scarlett Johansson (in a TF gold Pre-Fall 2015 dress, her hair coiffed in a faux-hawk) and Beyoncé in a TF black crystal mosaic dress avec Jay-Z, also in Tom Ford. Besides those chicsters, the two long front rows, which were slate gray ultra suede low banquettes, were filled with the likes of John Legend, J.Lo, Elton John, Rita Ora in a TF white tuxedo, Neil Patrick Harris, Miguel, Armie Hammer and Naomi Campbell dripping in TF gold sequins. Miley Cyrus sat close to her beau Patrick Schwarzenegger, who models for Mr. Ford. “I was in a bidding war at an amfAR event that he was at,” Cyrus told us. “And I outbid him on a piece of art.”

The energy was like a dinner party–a very fancy, stylish one. There were lots of New Yorkers, like Diane Von Furstenberg, Bruce Weber, Kevin Sessums, Harvey Weinstein avec Georgina Chapman and Inez van Lamsweerde and Vinoodh Matadin. “Tom and I go back a long time,” said Gina Gershon. “I met Tom ten years ago when he was doing Gucci and Yves Saint Laurent. I can’t wait to see him tonight! We’re planning a dinner when I’m in London next.” Excitement built as people scurried for their seats. “I haven’t seen anything. It’s always a surprise,” Buckley admitted of the collection. “I did see stuff once and told him I didn’t like something and I was wrong, so now, I try not to see anything before.” Jared Leto appeared handsomely under a black wide rimmed hat and a bushy beard. He hugged Witherspoon and sat down. The lights dimmed, and the show began.

“I loved everything tonight,” Cyrus gushed after Mr. Ford, as handsome as the cluster of stars in his front row, took a bow. “It was so sexy and beautiful; he had something hippie going on tonight, and I’m into that. I love all the colors. It’s all so beautiful.” Cyrus looked out at the crowd. “Fashion shows are interesting to me,” Cyrus says. “It’s a weird concept, but I like it. I’m happy to support Tom. I do it for the designers I truly believe in.”