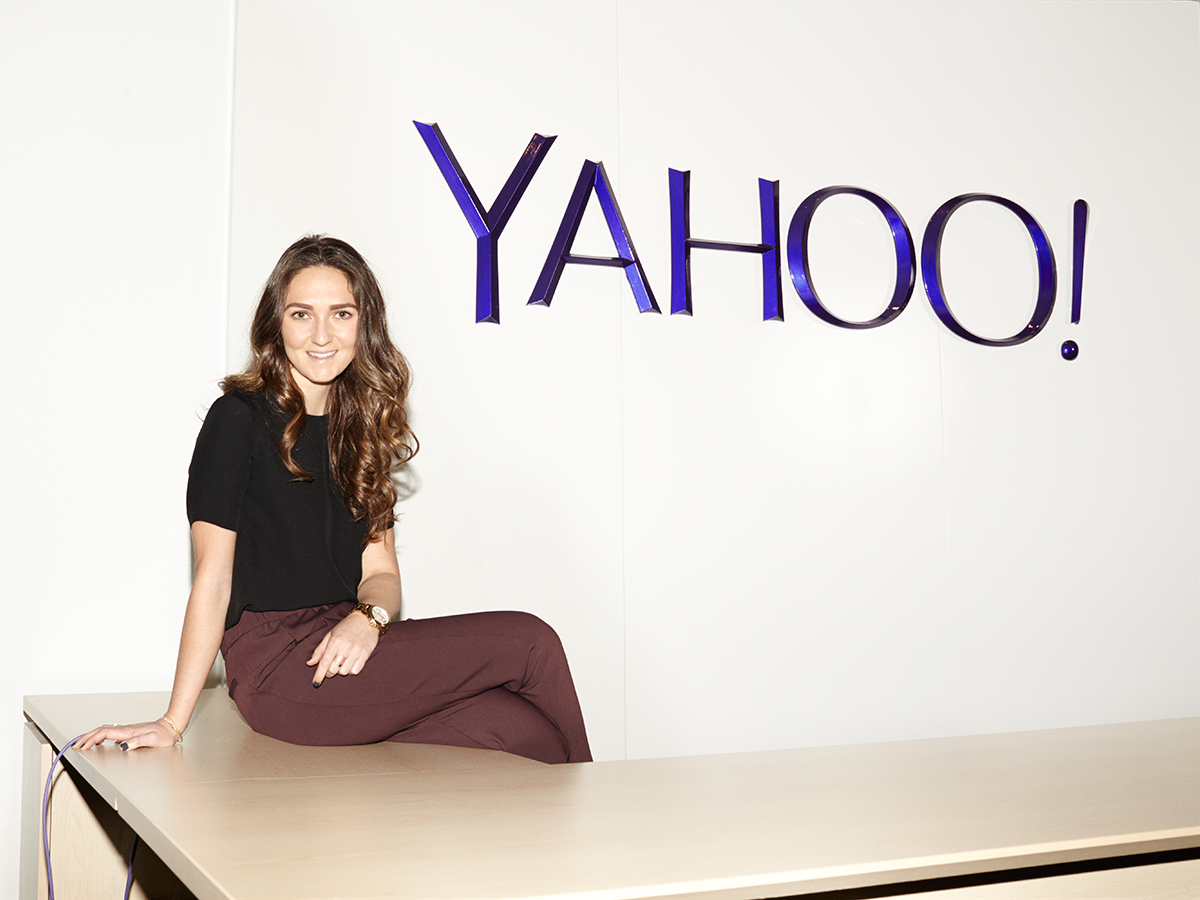 During the hubbub of Fashion Week, Yahoo Style debuted their glossy digital magazine, with Joe Zee at the helm. The site is churning out cover stories and playful videos that range from eating fries with Carolina Herrera to a roundup of the chicest boots out there. After chatting with Zee about his new gig, we asked Erika Ostroff, the site’s assistant editor, to offer up some insight for us. As an alum of Yahoo Shine, this California native’s been with the company for quite some time. So, how does she like her new digs?

What’s your backstory?
I was born and raised in San Diego. I went to school at USC in Los Angeles, where I majored in print and digital journalism with a minor in nutrition and business technology. In college I wasn’t sure what field I wanted to get into, so I got a PR internship at Starworks Group, but realized that wasn’t the field for me. Then I had the broadcast itch, so I tried out production at MTV and I also realized that wasn’t where my heart was. At the same time, I worked on the college newspaper, managing the style, beauty, and lifestyle pieces.

How did you end up at Yahoo?
The summer before senior year, I was really determined to get an internship, but I was going off to study abroad in Israel. One night I applied to positions at all these different websites when I saw that Yahoo had an editorial position open. Four weeks later, I got an email from Yahoo saying “We’ve called you four times and we haven’t heard back from you. If we don’t hear from you now we’re going to delete your application.” I had no idea that people had been calling me because my phone was disabled! I emailed them back and said “Please keep me in consideration!” I explained the situation and from there I had an interview set up.

What section of the site did you intern for?
Yahoo Shine, where I covered women’s lifestyle, health, beauty, fitness, and food. After my first internship, I was offered an extended internship at Yahoo’s California offices. That transitioned into the assistant editor position, which brought me back in New York. When Yahoo started rolling out its digital magazines, they closed Shine. A lot of the editors have gone on to focus on the magazine that related to the area that they focused on.

What was it like launching the new site?
It’s been really exciting! Everything has changed majorly. I was fortunate enough to help with the launches of almost all of the magazines, which have a completely new format and a completely different interface than Shine. The magazine is built on Tumblr. Being at Yahoo prior to all of the launches, it really helped me nail down how to build the magazine from the backend. That’s a really exciting part of my job, because I’ve learned how to code and actually build a website.

Did you help all the new hires settle in, since you were already on staff?
I definitely did. I’m really fortunate to have been here before the switch. At the same time, I’m learning so much from our team because it’s really my first time in fashion. I had a lot to impart on them with regards to the company and the technology and the backend of the website. It’s a nice give and take.

What’s your favorite part about working with Joe?
It sounds so corny, but I learn something new every day. I really value and appreciate the fact that he’s all about the team and he’s so involved. He writes, edits, curates the art, the tiles, and even the type face on our site, plus he manages the product and how the user experience is. Although Joe has his own office, he’s always with us brainstorming, collaborating, editing, and just bouncing ideas off around. It’s really a collaborative team group effort. Joe does everything to make sure that’s the case.

Do you ever have to do administrative tasks for Joe?
Not much, but I do help with his travel. And if I’m getting him food, I’m getting all of us food.

How often does Joe travel?
He splits his time between the West Coast and New York; he’s always on the run. At the same time, he’s still so involved.

What are your daily tasks?
My job deals with both editorial and digital. My day usually starts by sending out an editorial calendar for the day. Then I build stories, I write stories, I interview, I go to different appointments, and events; I really get to dabble in all the fields of editorial.

Does your team have a daily quota of posts?
We work really quickly and we’re fast paced, so we get up about 12 to 15 posts a day, which is a ton. We’re far surpassing our goals! Fortunately, we have an amazing team of writers who have the most brilliant ideas.

Do you have a particular beat you enjoy covering?
Fashion in general. I love to write feature pieces, but I haven’t gotten to do much of that yet. I’m also interested in health. We have a piece coming out where we’re going to be testing out some workout wear with different up-and-coming workout houses. I’m excited about that.

What would you say your favorite part of your job is?
Being shoulder to shoulder with such accomplished, intelligent people who are smart yet fashionable. I think it really debunks the myth that fashion is stupid, because it’s not. I also love the fact that I’m in a tech space, because I’m a total tech nerd.

You’re in the midst of a move to the old New York Times building. How’s that going?
Some of the company’s employees have moved to the new offices already. The editorial team is going to be the final group to migrate over there. I’m really excited because it’s supposed to be amazing! There are nap pods, tech-y vending machines, the whole nine yards. I’m very excited about it.

Where do you see yourself in five years?
I love fashion and I do love writing about it, but being in the tech space has really made me realize that I could see myself on the more managerial and product side of things, too. Words are really empowering, but the product and the way that people interact and interface with a website is equally as important.

Misa Hylton Is Ready to Show the...