Teen Vogue’s Phillip Picardi on His Rise to the Top 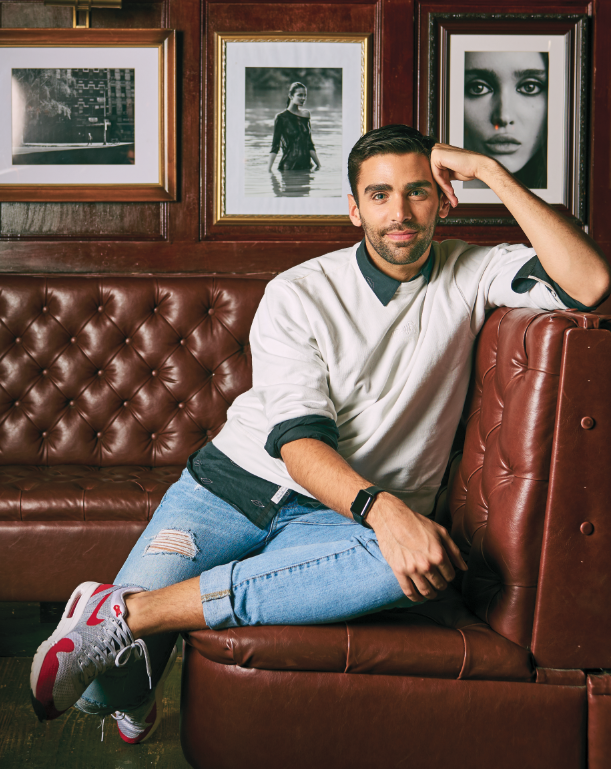 In a little over a year, Phillip Picardi has not only brought a 224 percent increase in traffic to teenvogue.com, he’s brought the title into the political conversation with articles that have caught the attention of unlikely readers, like Dan Rather. We sat down with the adorable and charming 25-year-old digital director at Chalk Point Kitchen to talk about his meteoric rise to the top.

Let’s start with your background.
I’m from North Andover, Massachusetts, and I was brought up in a big Italian family with four siblings. I had a lovely and normal childhood. I came to New York at 18 to attend NYU’s Gallatin program, where you can build your own major. Coming out of high school, I knew I wanted to do a lot of things, like work in fashion, but I hadn’t honed what I wanted my profession to be. I was really attracted to magazines and publishing, and the allure of the industry. My major ended up as beauty. There were a lot of classes about women’s studies, classes about the representation of women in media, art history.

What was your first internship?
It was for Racked. I read it in high school. Now it’s this huge website, but when I read it, it covered a lot of sample sales. I reached out to Izzy Grinspan, who now works for The Cut, and I made a résumé and sent a cover letter. We had a phone interview and I got the internship. During my first week at NYU, I was at the Alexandre Herchcovitch show.

Where did you sit?
In the front row.

You’re now digital director at Teen Vogue. How did that happen?
I was an intern there in college, and I had also interned at vogue.com and gq.com. I loved Condé Nast. Then I was working at a defunct website called lifestylemirror.com and I ran into [now Teen Vogue editor] Elaine Welteroth backstage at a fashion show, and we had what she calls an “instant soul connection.” A few months later, Condé Nast called and asked if I wanted to be the assistant beauty editor at Teen Vogue. I got the job; I was promoted to digital beauty editor six months later. Then I went to Refinery29 as senior beauty editor. Months after that, I was approached by Condé about being site director at Teen Vogue. Elaine had to take me to lunch to sell me on the opportunity. Initially, I was really weary. I loved beauty and thought that was going to be my field, but I started envisioning what the role could be, and I got the job. I thought that maybe I was too young for this, but my age has always been a motivating factor—I’m constantly rising to the occasion.

Are you intimidated to lead a team where people are older than you?
No. I’m lucky to work in a very open-minded environment. Age is never a factor, and it shouldn’t be. As long as there is mutual respect, you can get a lot of great work done. Working at Teen Vogue puts you in a unique position, because you’re talking to young people. My age is an advantage.

What kind of material is teenvogue.com covering under your reign?
A little bit of everything—it’s a young women’s guide to life. We have great roots in fashion and beauty, which we pride ourselves on and love, but we’ve expanded our coverage. We’ve launched a wellness vertical, and that’s everything from sexual health and orientation, to gender health, mental health, and nutrition. When I first got there, I launched the brand’s first sexual health series called “Love Your Lady Parts,” and it won an award from Planned Parenthood for excellence in media. We also dipped our toes into politics when I first started. Digitally, we’ve been able to experiment a lot and dig into the topics that we know our readers care about, and we have data to show how engaged our audience is with these issues. We can take that to our print team and say, “Look what’s happening here!” The print product has changed as a result. It’s been an awesome experience to lead a team that supports that charge.

Teen Vogue has become a part of the political conversation—even Dan Rather is sharing your stories. He wrote, “There you have it…”
In early 2016 I hired Lauren Duca, whom I first saw on Twitter and found her to be so smart. She lived up to her expectations. One morning in December, Intelligence officials released their report saying they believed that Russia had essentially tampered with the election. Before Lauren started writing that news piece, she said to me that it’s really hard, because we’re going to write this and half of the people in America are going to think this is false and designed to subvert Trump in some way. We started talking about that and how fact has become seen as partisan. What has happened to facts? Lauren said it’s like we’re being gaslit, and she submitted the op-ed to me to review. The piece did well, but then it spiked so high that it was off the charts. Now it’s the most-read article in our site’s history.

What made people see it?
When Dan Rather shared it, we saw a big spike. People who weren’t following @TeenVogue started talking about it. We had write-ups in The New York Times, The Washington Post, The Guardian. I hate this phrase, but it was the tip of the iceberg. We had been following politics with the same voice, but it goes to show you that it takes one piece for people to pay attention.

What kind of leader are you?
I have very high expectations, but I have a very specific view of what I want teenvogue.com to be. My boyfriend came to visit me at the office and met my team and when we were on our way home he said, “It’s so great. You didn’t go to business school, but you know the cardinal rule of management.” I said, “What’s that?” “You hired a bunch of people who are smarter than you.” It was a backhanded compliment, but the secret to the sauce is you have to let people do their work with a strong point of view so they can carry out their own vision of what this brand can be. Trusting people to do their work and doing their thing has been my big management tool. Once you have people who understand what the goal is, and rally behind that goal, it’s easy to watch magic happen.

You’re so charming. Were you class president growing up?
A woman was our president, and I was very happy to be her VP.

What have you learned from Anna Wintour?
So much. When I was a teenager getting interested in fashion, I bought Vogue, and in one of her letters from the editor, she wrote about marriage equality. That was a huge turning point for me. When I was promoted, I had the opportunity to tell her about that moment, and she said, “You have to stand for something!” I’ve watched her live that mantra, and now, I’m trying to make it my own.

What did you learn from working for Eva Chen?
Our roles as editors are not just fixed from our job descriptions or titles. She was always going above and beyond. It’s important to respond to your readers. She responded to her tweets and every single e-mail.

How do you connect with teens?
I put my e-mail in my bio in all my social media accounts. You can e-mail me if you want to talk. I try my best to respond to everyone who reaches out.

Which websites do you read?
NPR is one of my favorite things ever, BuzzFeed news, The New York Times, Vice, Vox, Refinery29. I usually read things via newsletter, because I’m so busy during the day.

Why do you think you’ve been successful in this role?
I’ve been interacting with Teen Vogue on and off for seven years, and it feels like it’s in my blood. I’ve seen the brand from a 360-degree perspective: I was an assistant, I worked in print, and I worked in digital when it was much smaller. Now, I feel ownership over what I’m producing, I also see a clear vision for its future. I know exactly who I want our reader to be, and what kinds of things I want her to be interacting with. I want it to be an enriching place for young women, and it’s been cool to see that come to fruition.

What do your parents think of all this?
My parents always wanted me to work somewhere like GQ, but as the job has gotten more intense, my parents are really proud. When Dan Rather shared that article, my dad was down for the cause. I didn’t even know how much he loved Dan Rather.

What’s your goal? You’re in a good spot now…
[Laughs] I barely expected to be here by 30, let alone 25, so I’m trying to focus on this for the moment!