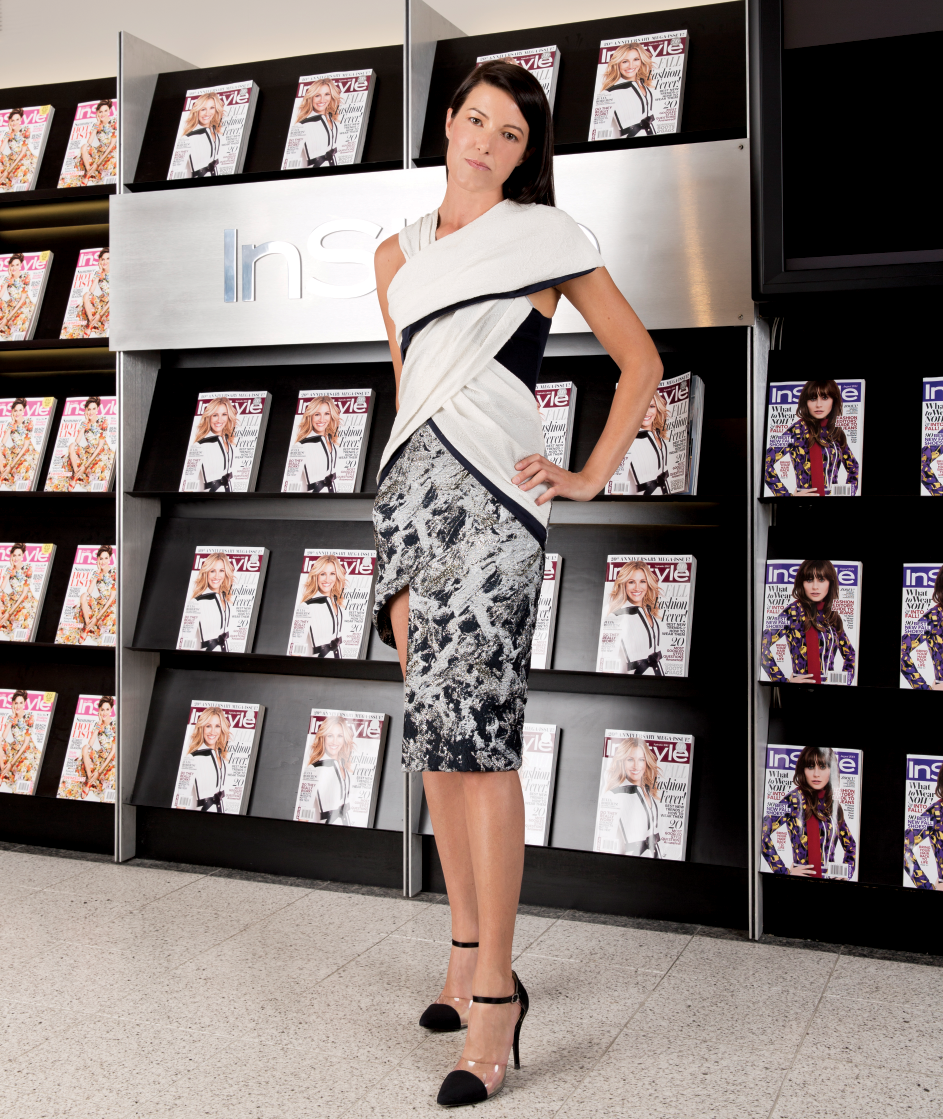 Just catching your breath post-fashion month? Finally, you’ve got time to pore over some of our dishy gems from The Daily in print this season! Following a decade of stellar styling stints, including a longstanding run at Prada, Melissa Rubini hopped back onto the masthead as style director for InStyle. A year and a half into the new gig, Rubini is ratcheting up the mass glossy’s fashion cachet, one burgeoning talent at a time.
BY ALEXANDRA ILYASHOV

What brought you to InStyle after 10 years of freelancing?
I felt ready for a change, but this job was completely unexpected! I met with Ariel [Foxman], who’s so smart and on top of everything. I always need an exciting environment, and to have such a trusted brand behind me and reach so many women felt like the perfect combination.

Was it a big transition to go from a decade of freelancing to being on staff?
Before I had many clients; now, I have one. It’s easier in some ways—I can study and really know everything about the InStyle brand. When I freelanced, the turnaround is so quick. You’re in and out. You don’t really see a brand progress.

Why did this feel like the right move?
I needed to be sure I’d have the freedom to be able to do what I needed to do. Ariel’s really been amazing; he trusts me with such a huge platform. I do every single cover and at least two features per issue, and I oversee the entire magazine’s styling.

What’s your styling approach?
My work has a sophisticated, modern, and contemporary feel; I’m always pushing forward. Ariel was looking for someone to bring InStyle to the next stage. At such a huge magazine, it’s not about switching things overnight. We have to take our reader by the hand and show her everything new and exciting, without scaring her. She has to trust us.

Was your styling edgier during your freelance days?
I was at Prada for 10 years, which is, of course, a very forward brand. I also did Guess campaigns and worked with Numéro, among other projects; I worked across the board.

What do you like about your on-staff current role?
Coming to InStyle was about what I look for as a woman in the world. I have a daughter; what do I wear to PTA meetings? You can get out of reality very quickly if you think only like a stylist or fashion person. There are amazing clothes to photograph which become amazing images, and that’s great, but it’s about finding balance between what’s exciting fashion-wise and what our reader can actually see herself wearing. My approach at InStyle is that of a woman’s best friend.

Has the talent pool at the glossy changed lately?
There are a lot of fresh, innovative collaborators. Throughout my career I’ve tried to champion new talent. InStyle is allowing a new generation of stylists, designers, and photographers to come in, balanced with established names and the magazine’s iconic strength.

Names, please!
Greg Kadel started shooting with us—I love his work, and he’s very respected in the industry. We’re featuring designers like Marco de Vincenzo—in the past he might not have had much space in the magazine. We featured a Christopher Kane look on one cover; I feel that wouldn’t have happened in the past.

Celebs have always reigned supreme in InStyle’s pages. Was that new turf for you?
We don’t use any models whatsoever. Of course, celebrities are very different than working with models. Before InStyle, I hadn’t done celebrity styling, so it’s been a shift. Celebrities can be thought of as up on a pedestal, or as extremely talented, accomplished women of different ages and sizes. Compare that with a magazine full of 15-year-old models.

What’s it like styling all of the mag’s celeb covers?
We have a huge selection of looks, I explain the story, and we try things on. I always prep for shoots—I look at all the magazines they’ve been in before, I watch their movies, read their interviews, try to find out who they are. It’s a lot of research! To take someone to a new place, I have to respect what they’ve done, and add a fresh layer.

How are you celebrating InStyle’s 20th birthday?
Julia Roberts is on the cover. I absolutely love her. I don’t really get star-struck, but when she entered the room and smiled that Julia Roberts smile, I was like, “Oh my God, she exists and she’s here…and she’s absolutely lovely.” We also had our Makeover and Fashion Rocks issues to put out at the same time. As if one September issue wouldn’t have been enough!

How did you feel when Eric Wilson hopped from The New York Times to InStyle?
It was fantastic to have him join—it added another piece to the puzzle. It feels like a more rounded, complete team with Eric here. What’s not to love about him?

What’s Ariel like as a boss?
He’s scarily smart. He knows the reader so well. And he’s really collaborative. Ariel’s very funny; that side of him doesn’t always show. We’ve become great friends.

Way before joining InStyle, how did you get into styling in the first place?
Totally randomly. I moved to New York from Brazil to study photography; it’s always been my passion. But I started assisting different stylists out of the blue to support myself, and I just loved it. Joe McKenna was the first stylist I assisted. Then I worked for Victoria Bartlett. Next, I assisted Anne Christensen at the The New York Times. It was my first job, really.

How’d that go?
I was 20, working at The New York Times, and not really speaking English—it was really intimidating. Sometimes when you know too much, it paralyzes you, but if you don’t even know how scary it is, you just do it. That’s how I operate; a sort of professional blissful ignorance.

What happened next?
Collaborating with Prada was another jump. I was very young; I worked with Steven Meisel. I learned so much from him that I couldn’t have learned anywhere else. He’s brilliant. The way Prada shoots campaigns is a very different, collaborative style than most photo shoots.

What’s your personal style philosophy?
Modern, minimalist, very easygoing. I move at a very fast pace, so I have to feel comfortable! I have a uniform: tailoring, a mix of feminine and masculine, heels sometimes. I barely use makeup.

Do you hang with a lot of Brazilian fashionettes?
When I see Brazilian models, we instantly speak in Portuguese and give each other 10 kisses. But in general, I’m a very private person—I like to go to events and be there for designers, but I don’t always have to be out here, having “the fashion life.” Since I had my daughter, the past eight years have been about juggling traveling, my daughter, and work. That’s already a lot.

Is your daughter into fashion?
She is, and it’s kind of scary. She loves to try on high heels. I’ve done a lot of respected work in the fashion world, but when I started at InStyle and we did a Taylor Swift cover it was the very first time my daughter said, “Mama, you’re famous, I know what you’re doing now!” Taylor was so sweet; she gave us backstage tickets, and I became the coolest mom ever.