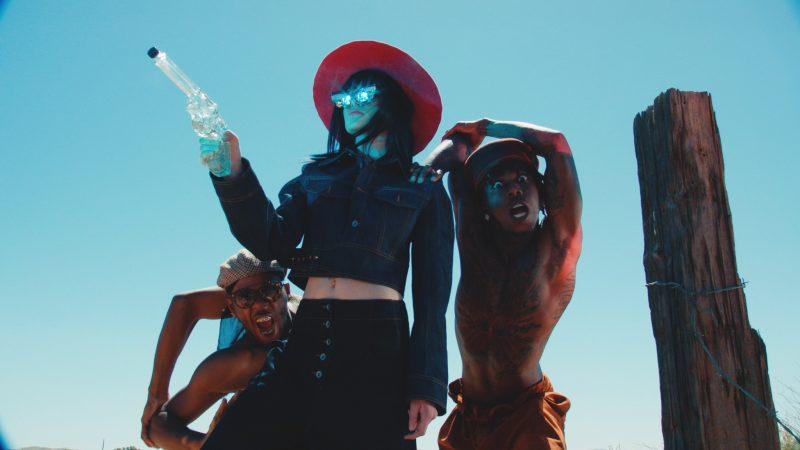 Stella McCartney has collaborated for the second time with visual director Philippa Price on a short film titled Eclipse. Price’s futuristic surrealism—think Quentin Tarantino with a dose of David Lynch—portrays McCartney’s clothing in a whole new, exciting light. Infused with some of the Spaghetti Western aesthetic that has been influencing fashion recently, McCartney’s British equestrian-inspired tailoring and print motifs are brought to the American West. The film, which features both the men’s and women’s collections, was styled by Savannah Baker with hair by Preston Wada and makeup by Mynxii White. As for the cast? Natalie Bergman of the band Wild Belle, who also performed songs for the film, along with Jean from the band H099o9, Megan Nisson, Philippa Price herself (depicted masked and riding a horse), and two dancers named Ringmaster Nugget and Ringmaster Vibez.

The film was shot in a desert and depicts a moment of outlaws and revenge with certain sequences filmed in trippy rewinding sequences. “I guess it’s just how I see the world,” Price told Stella McCartney in a Q&A featured on the brand’s website. “Dreams and reality are not separated in my mind. Besides normal already exists; normal has already been done. Screw normal!”

For the full interview click HERE and for a look at Price’s first film for Stella McCartney, Uncanny Valley, click here. Full video of Eclipse below! And if you’re in the market for any of the clothing, head over to Stella McCartney’s new retail location at 929 Madison Avenue that just opened last week.

Watch Donatella Versace Lip-Sync to “Versace on the Floor”