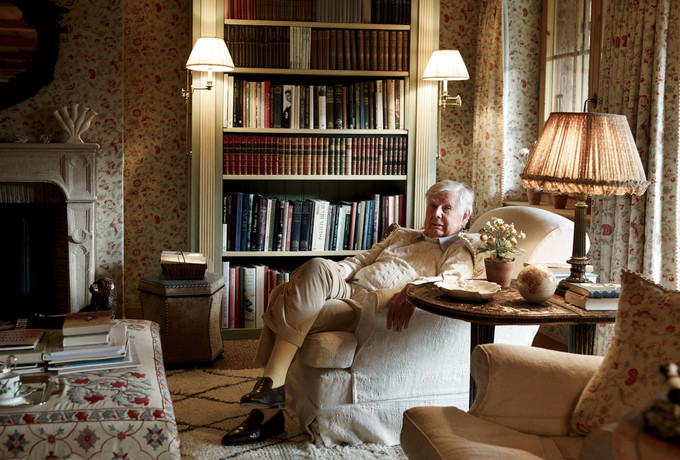 Publishing titan John Fairchild died today at the age of 87 after a long bout of illness. The infamous media figure was the longtime editor in chief of Women’s Wear Daily, taking over the reigns in 1960; he also founded W in 1972, and headed up Fairchild Publications for 30 years until retiring in 1997. He also wrote a column for nearly four decades under the pseudonym Countess Louise J. Esterhazy for W, until Stefano Tonchi became the editor in 2010. In September of 2012, in a piece written by Meryl Gordon, Vanity Fair caught up with the then 85-year-old, once the most feared man in fashion, to reflect on some of his memorable feuds and stir up the pot one last time in an article entitled “Fashion’s Most Angry Fella”. We’ve collected a few highlights from the feature…and we highly recommend heading over to Vanity Fair.com to read the full story.

Donna Karan on meeting him early in her career: “I thought I was going to faint, I was so scared. John was larger than life—he intimidated me.”

James Fallon: “Oscar [de la Renta] is one of the few friends in fashion that Mr. Fairchild has maintained, after he retired. But he would just torture Oscar in the pages of WWD, viciously, never let that get in the way of a review. Same with Bill Blass.”

Fairchild on Saint Laurent’s longtime partner, Pierre Bergé: “He dropped me like a hot potato.”

Oscar de la Renta on Fairchild: “For all of us, there’s a great debt to be paid to John Fairchild, because he’s the first one to put American designers on the map.”

Fairchild on Coco Chanel: “She had the best wine, champagne, whiskey; we’d both be bombed out of our minds. She could only talk about herself. Hated everybody else.”

Fairchild on skipping anniversary celebrations for W in 2012: “I’m out, finished, and over. You don’t drag an old fossil around. It’s a new world.”

Fairchild on regrets: “I never think about it. … I’m spoiled. Lucky and spoiled.”

Get To Know Model Malaika Firth