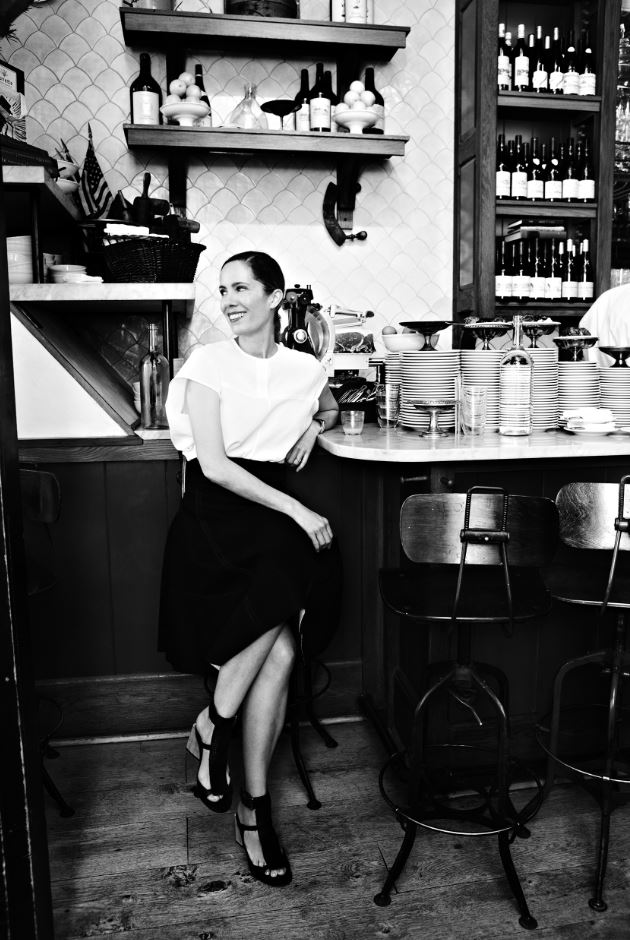 Bonjour, Paris! As the shows kick off today, we just had to whip out this gem from our NYFW print issues: What to do if you’re show-hopping with a little one in tow? Let Bon Appétit exec editor Christine Muhlke advise you on doing Paris avec kids…

France isn’t Italy. Walk into a caffè in Milan with your toddler, and you could probably hand over your kid to one of 10 fawning women while you run to the bathroom. Walk into a café in Paris with your child, and eyebrows raise. (That’s why all the parents sit outside.) But hey, you couldn’t afford to bring your nanny, so here are some places to go and things to keep in mind. As for how to deal with French attitude, next time you see ELLE’s Anne Slowey, ask her about that time she took her baby to the Hemingway Bar.
BY CHRISTINE MUHLKE

SHOP TALK:
Alice à Paris is like A.P.C. for kids: clean lines, low-key styles. No animals or pink. For years, rumor has it that Monoprix hired a Bonpoint designer. After I spied an exact copy of the Bonpoint hand-me-down coat my son was wearing for about 50 euros, I believed it. I mean, where else could you buy Hermès-style espadrille booties for a 10-month-old for 15 euros? Slowey loves Bonton’s three-story Marais location for clothing and toys—not to mention the photo booth, the hair salon, the café (and the proximity to sibling shop Merci). Around the corner, she loves the colorful hand-sewn kids’ clothes at ie boutique. Toys? Try Si Tu Veux in Galerie Vivienne near Palais Royal.

CULTURE FIX:
Wednesday afternoons and most weekends, all the museums have ateliers for kids in conjunction with the current exhibits. (I love the Jeu de Paume Concorde.) Architect Charlotte Macaux Perelman takes her kids to Centre Kapla in the 11th, where they’re let loose among millions of the stacking wooden pieces (think smart Legos). Pastry counts as culture: Macaux Perelman also swears by the baking workshops at Bogato, which hosts classes for kids 4–12.

ALFRESCO ATTRACTIONS:
Like any fashion mom, Slowey knows the Jardin des Tuileries intimately, with all its free-play trampolines, ladders, carousels, and more. Libération Next executive editor (and Daily alum!) Elisabeth Franck-Dumas says the small zoo inside the Jardin d’Acclimatation—which also has rides, candy stands, a carousel, and more—is “a fail-proof afternoon.” The puppet (marionette) shows in the Jardin du Luxembourg are still Truffaut-worthy, while La Grande Ménagerie in the Jardin des Plantes houses plenty of smaller and rare animals, birds, and reptiles. Tucker designer Gaby Basora, who often brings her three boys to Paris, swears by the pony rides at the edge of the Bois de Boulogne. Her older son also loves skating in the recently renovated Parc Clichy-Batignolles, where there’s a cool water park, too. On Sundays, the quais are now closed to traffic, so strollering/scootering/skating is safe.

DINE DO’S:
Franck-Dumas suggests the Rose Bakery inside Bonpoint in the 6th, and says André’s Hôtel Amour and Tokyo Eat at Palais de Tokyo are overrun with kids on weekends. In the 17th, Le Bal is a fantastic daytime restaurant directly across from a playground. Basora bases her trips around chocolat chaud, first at the posh, pleasant Carette in the 16th (adults: amazing pastries!), then at the café across from the Centre de Danse du Marais. For dinner, she’ll stick to the Marais, where hipster favorite Derrière has lots of little rooms to explore. I simply try to memorize the locations of major bakeries. I’ve learned about the ultimate French pacifier: the baguette.

Is Brick-And-Mortar Dead? E-Tailers Say No!