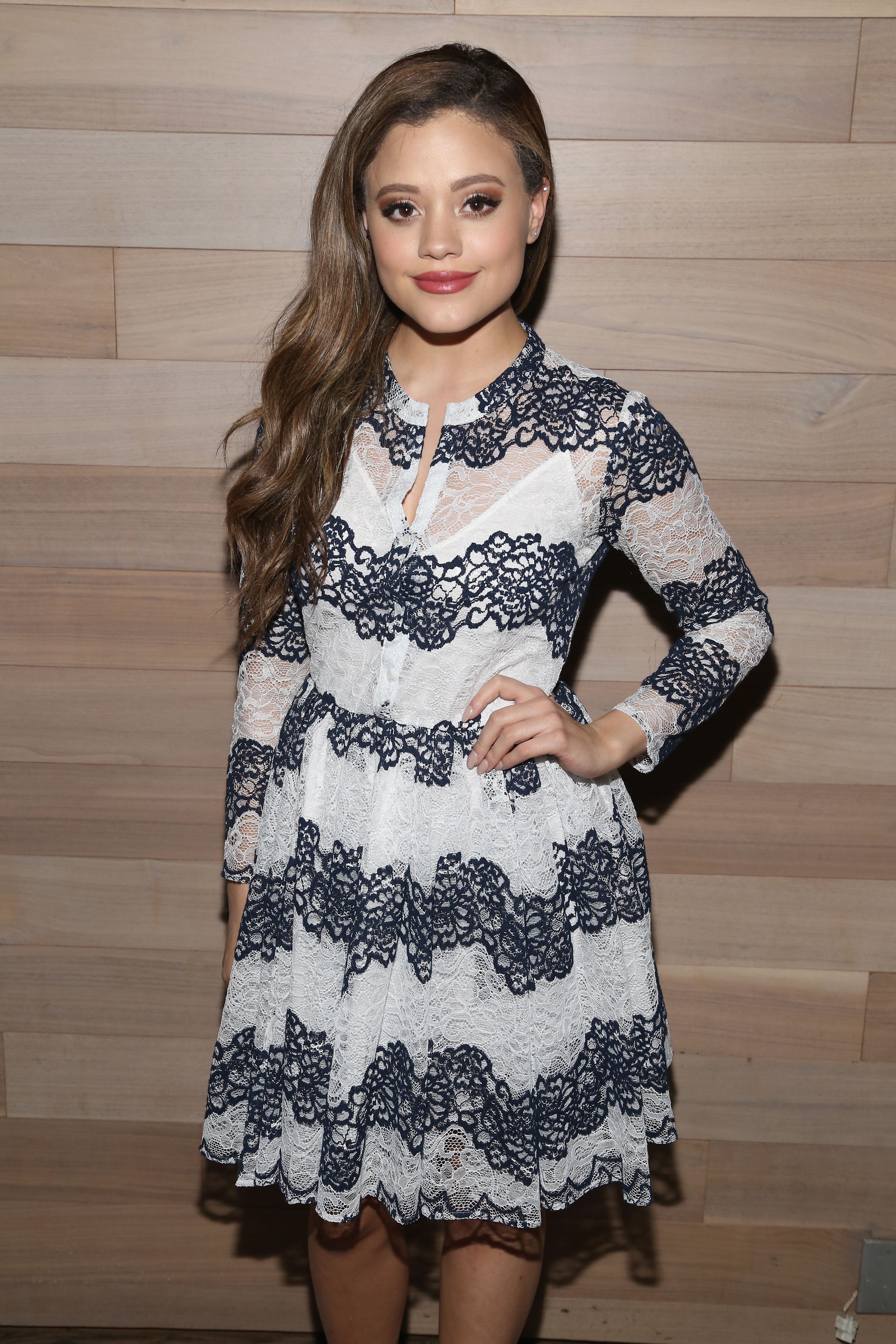 NEW YORK, NY - MARCH 01: Sarah Jeffery attends NBC and The Cinema Society Host the After Party for the Season 2 Premiere of "Shades of Blue" on March 1, 2017 in New York City. (Photo by Sylvain Gaboury/Patrick McMullan via Getty Images)

Meet Sarah Jeffrey, the actress who first made a splash on the big screen in The Descendants with George Clooney in 2015, and is now starring alongside Jennifer Lopez on the small screen in the NBC TV series, Shades of Blue. The actress broke down her role to us, what working with JLO is like, and how she plans to celebrate turning 21. P.S.: If Sarah looks familiar to you for other reasons, she was linked to Justin Bieber last year, and they apparently saw JLO’s Vegas residency together.

You were in The Descendants movie a couple of years ago. The mood of Shades of Blue is a little…darker!
It’s true! It’s awesome that they are completely different tones—they couldn’t be more different, but it’s nice to have the opportunity as an actress to play those different parts and get to expand my actor vocabulary. Plus, it’s nice to be on a TV show because you get to work exceedingly on following seasons and you get more of a chance to get to know your character.

What did you do to prepare to be Jennifer’s daughter on the show?
I’m a daughter in real life, so there’s that! [Laughs] I can pull from my own experiences. We chat and run our lines before the show, so that helps. But when I’m in the scene with her, it’s easy to let myself go and get caught up in it. I know what it’s like to be a daughter and to have those vulnerable moments with your mom.

Does your actual mom get jealous?
No [Laughs]. My mom is a fan of Jennifer! And she’s used to me playing someone’s daughter, because I have, previously. She’s super cute about it. She usually gets really close to my on-screen moms!

What’s the best piece of advice Jennifer has given you?
I think the best thing that I’ve learned is to give 110 percent to everything I do. She has so much going on, but she’s still so professional, and she’s so good at everything she does! It inspires me to do the same.

We hear you’re turning 21. How are you celebrating?
I’m tossing up going to Las Vegas with my sister. We might go to LA and then road trip to Vegas from there because they’re so close. My sister is already 21, so we’ll have a good time!

Too bad Jennifer’s Vegas residency is over!
I know! She might be doing more shows, but who knows. I had the chance to go see it though, and it was amazing.

Where are you from originally?
Vancouver BC, Canada.

What do your friends think of you working with Jennifer and having this big role?
They are really proud and it’s really nice to have their support. It’s exciting for them too. I come from a small town, so it’s just kind of surreal for all of us.

Did you grow up listening to Jennifer’s music?
Yes! Oh my gosh! I had a jazz group to “Let’s Get Loud” and it was my jam. It was my favorite song.

How do you describe your personal style?
It’s a bit all over the place. I look to people I see on the street and friends. I’ll eye certain pieces and then I’m on a hunt to find them, so if I see something I want, I will make it my goal to get out and get that, whether it’s a sporty piece or a really cool jacket. My style ranges from preppy to sporty to edgy. It’s kind of all over the map.

These $12 Velcro Rollers Are The Secret...