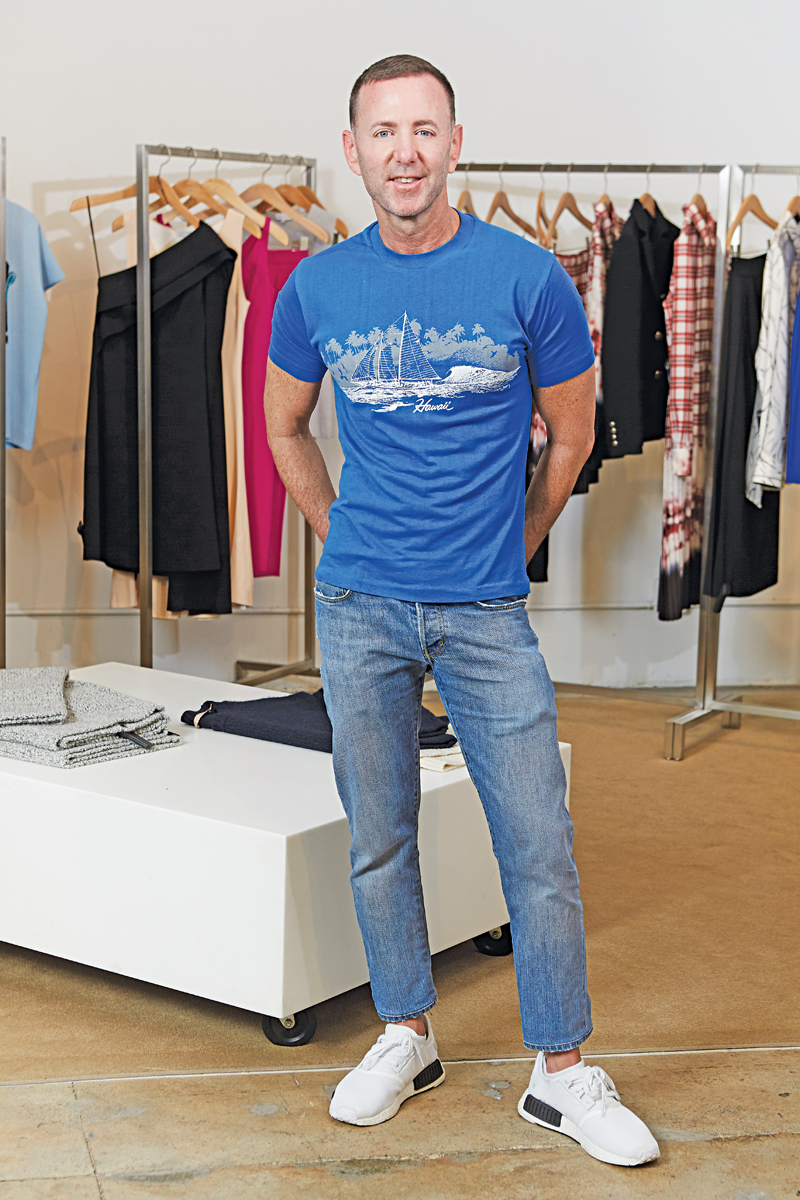 New York wouldn’t be the same without Jeffrey Kalinsky’s namesake West 14th Street store Jeffrey, which moved into the MePa when that ’hood was basically still a piece of steak. The Daily recently stopped by his offices to peek into the world of this understated fashion powerhouse.

You were a pioneer in the Meatpacking District. What brought you there in the first place?
It will be 18 years in August. New York life was different when I was opening. Designers were selective of how many places in the city they would sell. I had no money, so it’s not like I could have opened at 57th and Fifth Avenue anyway, but had I wanted to, I would have been competing with Barneys and Bergdorf and Saks for distribution. Downtown on the West Side, if I were carrying a collection, nobody could say I was competing with them. I found the location and signed the lease in a handshake; the space didn’t need a ton of work. I loved the streets, and there was nothing around here.

Do you like it more today?
I like it now and then, but it’s just different. I liked how quiet and serene the area was and knowing when people came in they were coming in for us. But I love being in a neighborhood that now has the Whitney, The Standard. I love my neighbor Diane von Furstenberg. I love what Chelsea Market is today.

What are the Fashion Months like for you?
We go to Milan, Paris; we don’t go to London. We buy all the English designers in Paris and, of course, we do some buying here. A great fashion show for me is like a great piece of art. It’s much shorter, but when you’ve seen a good one, it’s quite thrilling. Things either stimulate me or I tend to feel nothing. There’s a lot of feeling nothing. When you feel something, you know it and feel alive. It’s a great feeling.

How close are you with designers?
I’d love to tell you that when I’m in Paris that I’m having dinner with this one or that one, but that’s never really been my life. I’m a buyer. I love to buy and see and touch the clothing. I’ve never been really good at the schmoozing. In New York, I’d like to say I’m a friend of Joseph Altuzarra. He’s a sweet guy. We recently had an appointment with Prabal [Gurung], and it’s always nice to see him. In the day I had a nice relationship with Alber Elbaz and Jil Sander. I value that.

Do you go backstage after shows?
No. There’s such a crush of people, and they are all rushing to congratulate. It’s more respectful to give people their space. I loved the Balenciaga show last season, and I’m sure that got communicated. I’m not sure they care if I personally like something.

They care!
You put your money where your mouth is. If they get an order for eight pieces, you didn’t really love it.

What’s a big order?
Let’s pretend. Hypothetically everything is bought
in dollars and one season you’re spending $25,000, and the next season you are spending $50,000, that’s a huge increase in your order and that means you really might have liked it. Obviously the reverse can work too.

What are Jeffrey customers looking for?
I always think that my customer is like me. I like to be constantly stimulated. I don’t want to come in and see a new version of what I saw last season. A lot of fashion is counterintuitive, and a lot of stores need that for their customers. Our customers need to
be restimulated.

What’s your role at Nordstrom now?
My title is vice president/designer fashion director, and my main responsibility is to represent in the press the designer business at Nordstrom. I curate the two big books that we do every year on our designer fashion from the runway collections. It’s 36 pages and a 12-page insert in Vogue twice a year. I work with the creative team to select the photographer, the models, and the concept, and I select the product with the merchant team.

Is it a lesser role than what you were doing before?
It is, but lesser implies a negative connotation. There’s a lot less responsibility, which is what I wanted at the time. I loved my other role, but I wanted my focus to be back on Jeffrey. When I was doing the other role I was doing double duty, and it got to be more than I wanted to continue to do.

When is the 57th Street store planned to open?
Everybody would be thrilled if it opened in 2018!

Do you go into your store every day?
If I’m in town, I’m in there at some point every day. But I’m not spending a full business day in the store.

Essentially you’re a shopkeeper.
That’s how I see myself and wanted to be. When I got started, I never considered myself to be going into the fashion business. I just saw that I was going to open my own store.

How would you describe your style? You are often seen in jeans, sneakers, and a T-shirt.
I don’t know when, but at some point I sort of developed a uniform. I hate that about me. When I was in my thirties, I could be counted on for a good getup. I do like fashion, but I don’t see myself in a lot of obvious fashion. A nice cashmere sweater from Saint Laurent…I’m obsessed with vintage T-shirts. I’m obsessed with every thing blue. I love jeans. These days, I love a white sneaker.

You’re now on TV as part of the CFDA/Vogue Fashion Fund series on Amazon.
Not that many people get to see it, which is okay with me. I’m a part of the CFDA/Fashion Fund because I really believe in it. I’m honored to be a part of that group of judges, but I can’t worry about the cameras. I’m not camera-ready. I don’t have that smile and that pithy thing to say. I’m there to try to figure out who really deserves the support. I find it best to forget we’re being filmed. Ken Downing and Jenna Lyons are very good and comfortable on camera. They’re just naturals.

What did you think of Saturday Night Live spoofing the store many years ago?
When it first happened, I was mortified. I felt like I was being made fun of. All I ever wanted and still want is for people to recognize that we try super hard to be nice to everyone that walks in the door. There we were being accused of the opposite. I remember my phone started ringing on Sunday morning. Eventually I thought something must be wrong. Someone taped it, so I saw it and was mortified. I went to Pastis later that day and people thought it was a ginormous deal, like somehow it was a very good thing. Then I would pray that it wasn’t repeated, but it was, and then it went away. Today I wear it more as a badge of honor.

You were an early supporter of Brandon Maxwell. What designers do you have your eye on these days?
I still think of Brandon as being new, and I’m wild about him. He seems to have everything he needs to be successful. I believe in the guys at Brock, and I’m very hopeful about what they create. Monse is an exciting new evolution. On the men’s side, I like all the stuff that’s happening in L.A. I’m fascinated by what’s going on in Los Angeles. Jerry Lorenzo at Fear of God has created this thing that has so much appeal.

What’s your take on “see now, buy now”?
I don’t approve of it. You have a fashion show on a Tuesday and they can buy it on a Wednesday and they all pour into the stores? No. People shop when they shop. I don’t think because some people have seen something on social media that six months later they aren’t going to be just as excited when they can see it and try it on and fall in love with it. I get to see everything six months in advance and when it comes in, I am super excited. See now, buy now is not stimulating. It’s hogwash!

Tell us a little bit about this year’s Jeffrey Fashion Cares.
It’s an evening on April 3rd in New York that consists of cocktails with a silent auction, and then you make your way into a room where there’s a fashion show with 40 of the world’s most beautiful male models in head-to-toe fashion with a lot of skin thrown in. As part of the evening, there’s a live auction and some talking about the beneficiaries, but we try to keep the talking to a minimum and the entertainment to a maximum.

How did it begin?
I did a show for our customers in Atlanta in the early ’90s and a few hundred people ended up coming. It was a free event. All these people wanted to come, and I bet they would pay to come and that we could have an AIDS fund-raiser. In 1992, AIDS was still decimating gay men. I wanted to do something to give back to the community.

The event in New York is now on the Intrepid. What do you think of how it’s boomed?
This is our 14th year, and I’m excited about the way it’s grown, but it has potential to be even more than it is. Between the Atlanta and New York events, we’ve raised well over $15 million, so we have done a good job. But I always want to raise more. It takes a lot of corporate support, which can be challenging to get. This year the beneficiaries are the Elton John AIDS Foundation, Hetrick-Martin Institute, and Lambda Legal.

There’s a pair of fake ruby slippers from The Wizard of Oz in your office. What’s that about?
A wonderful woman named Marjorie Hampton used to work for me for many years when we first opened. I used to worry; I still worry incessantly. I want everything to be perfect, and it says, “You don’t need to be helped any longer, you’ve always had the power.” It’s nice to be reminded that you can always go home.

Rei Kawakubo Comes Out for Costume Institute Preview in Paris