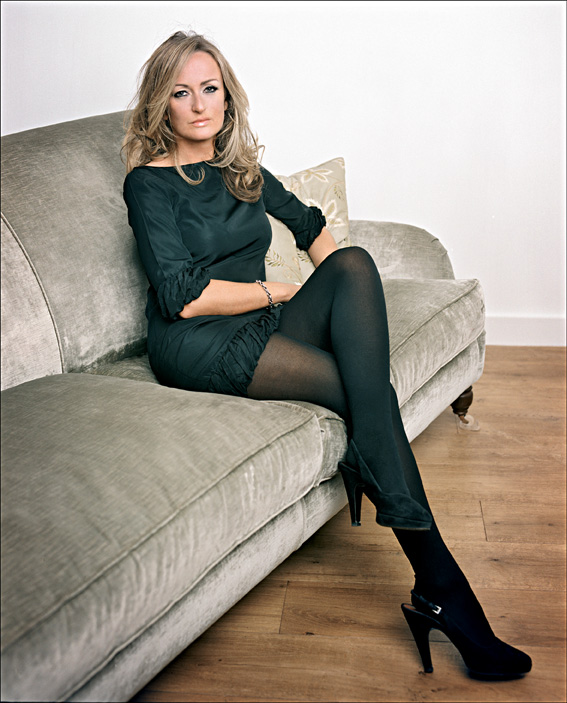 With showstopping visuals, incisive stories, and an addictive click-to-buy component, Porter magazine is the shopping and lifestyle guide that modern women have been waiting for. Editor Lucy Yeomans explains its ascent.

One of your strengths as an editor is that you’re so strong in the visuals as well as the words. Which came first for you?
My background was as a writer, but I studied the history of art, and I’m with an artist, so I’m around art every day—even if I don’t want to be. [Laughs] The visuals and the words have to be complimentary, and a really good magazine has to be an interesting combination of the two.

What do you think makes for a successful editor in 2015?
I went to Natalie [Massenet] with the idea of creating this magazine for a global company, and one of the reasons it was super exciting is because it’s led by a visionary leadership team. Things move so quickly here, and to be an editor in 2015, you have to give the woman the content she wants, and where she wants it. You almost have to forget what you think you knew about publishing. We can buy everything from the catwalks now, so my job is about curating a point of view for the audience. And can you add a service element? How can we make this experience better for our reader? When I’m going through our digital edition, I’m looking at shopability—you can click on that cover and buy the dress. On an inside page, you can click through to a website of an author’s work, or book that spa. At Net-A-Porter, we’re always asking, “Where is she now? Where are we reaching her? How do we talk to this woman?”

Some of our favorite luxury brands, who shall remain nameless, do not sell their ready-to-wear online. Do you think they’re completely insane?
No. Everyone chooses how they have a dialogue with their audience. There are certain things I can’t imagine buying online, and there are other things that surprise me. But again, I think they need to think about where their audience is, and how would she like to consume their product. When we launched Porter, there was a big misconception that we were going to be a Net-A-Porter catalog, and actually we’re a very even experience. If you want to buy that Chanel suit or that Hermès bag, we have a concierge service that will deal with you. With brands, the goal is to have a dialogue, which may be online, in stores, or through personal shopping.

Who are your most trusted advisers?
My other half [artist Jason Brooks]. I’m very close to my publisher, Tess Macleod Smith. And I have a few friends who I think are real Porter women, and sometimes I’ll run things by them—I’ll whip out my iPhone in the playground and give them a preview of the cover.

Who are your toughest critics, besides yourself?
The women we make the magazine for. At an event earlier this summer, a model came up to me and said, “I just wanted to say thank you, because I haven’t really read a magazine for 10 years and your magazine made me feel like I could go out and rule the world and made me feel really proud to be a woman.” That comment sends my happiness off the charts. I always love to hear what women think about us.

It’s no secret that this is a difficult time for American magazines. Do you have any advice for us?
People love well-curated content with a strong point of view. And I think the most important thing is just to listen to your audience. We have our own publishing division, but the company believes the customer’s always right, and we give her what she wants. And the service element is really important. For quite a long time, magazines have been, “We’re here, this is what we think, now go out and listen to what we say.” You can pick up some magazines, and the clothes might not be in shops for another two months! We surveyed 7,000 women from around the world and asked what they wanted from a magazine today. They wanted to receive it when the clothes were actually in stores. So we’re not trying to be first. We live in a culture of instant gratification—we see something in Porter, we want it, and we will get it to you. You can click on the Marc Jacobs cover dress, and if you’re in New York, it can be in your house in two hours, before you’ve even finished reading the magazine.

Yes! It makes wardrobe-building rather easy.
And then you can get on and live your life. I’d rather go see Anish Kapoor at Versailles. We’re all so busy, we have so little time to be with our families, we’re all Instagramming and socializing. Before, you’d be on a car journey, or a train journey, or a commute to work, and you’d maybe read a paper or you’d sit and stare out the window, but now, we all have so many pulls on our time, and I just wanted a magazine that kind of cut through it and said, “This is the good stuff.” We’re not going to cover every single trend—I banned the word “trend” from Porter. It’s about how you’re going to put together that wardrobe. Some of it’s really basic 1950s fashion magazine stuff, which is combined with lessons from all the wonderful brains in my company who make me think about things differently.

Such as…
When we’d first begun, we were talking about subscriptions. We were talking with the customer care team from Net-A-Porter about what would happen if a reader suddenly didn’t like the magazine. They said, “Of course if they don’t like it, they can send it back.”

Is there anyone you can’t book for the cover that you would love to have?
Yeah, I probably can’t say that because they’ll probably be upset. [Laughs] The funny thing about the covers is, there are lots of people, and then there are not lots of people, whom I want on the cover. I’m actually glad we only have six a year. We’ve done a lot of model covers, and I’m really, really happy that they’ve performed so well on the newsstands. Because again, I think that there’s lots of ways to tell a story about a woman, and sometimes it’s with an interview with an actress and sometimes it’s a model working with a fashion story. I want people who are willing to do what we want to do. It’s not about putting them in some kind of crazy scenario—it’s more about working with them to do something that feels almost more like a portrait. I remember sitting in the Four Seasons in Milan before Porter had even launched and showing Cate Blanchett this video of who I thought the Porter woman was. It was made up of all these illegal video clips that had been strung together. I said, “This is my Porter woman, and you are absolutely 100 percent her,” and she was like, “I’m in. I’m in!”

Alex White has joined Porter in a more formal capacity. Why did you decide to solidify that relationship?
Alex and I have been talking since before Porter was born. Alex really got the woman that I wanted to represent. Obviously, I’m a big fan of her work, and we really needed to get a team together that worked properly—the photographers, the stylists, our fashion director. It’s a real collaboration, making these projects, and making that relationship a more formal one is very, very exciting for us.

If you were not editing a magazine, what would you be doing?
When I’m a crazy Englishwoman living in the country, I’d love to curate a sculpture park. I have a massive passion for all sculpture, but particularly contemporary.

Where do you shop?
Even pre Net-A-Porter, I was a mad Net-A-Porter shopper. I want the transaction to be done quickly and painlessly. I love the power of clothes, but I actually hate shopping. [Laughs] I’ll definitely get fired for that one!

Is there anything gauche about you?
I really like cheap chocolate. I’m never good at scheduling in manis and pedis. I also like some quite bad crime dramas on television. This is not gauche, really, but everyone thinks I have my hair blow-dried, and I never get my hair blow-dried. I’ve got my hairdresser asking, “And when did you last have your hair cut?” At Net-A-Porter, we have some very, very chic American ladies around, and they’re all so perfectly groomed. Growing up in Scotland, you groomed your horse, you didn’t really groom yourself. And recently, someone was telling me about how they really didn’t want to go to Disneyland or Legoland. I practically had my child in order to be able to go to theme parks.

Are you a roller coaster girl?
I love them. And I’m a big Formula One fanatic as well. I love anything fast.