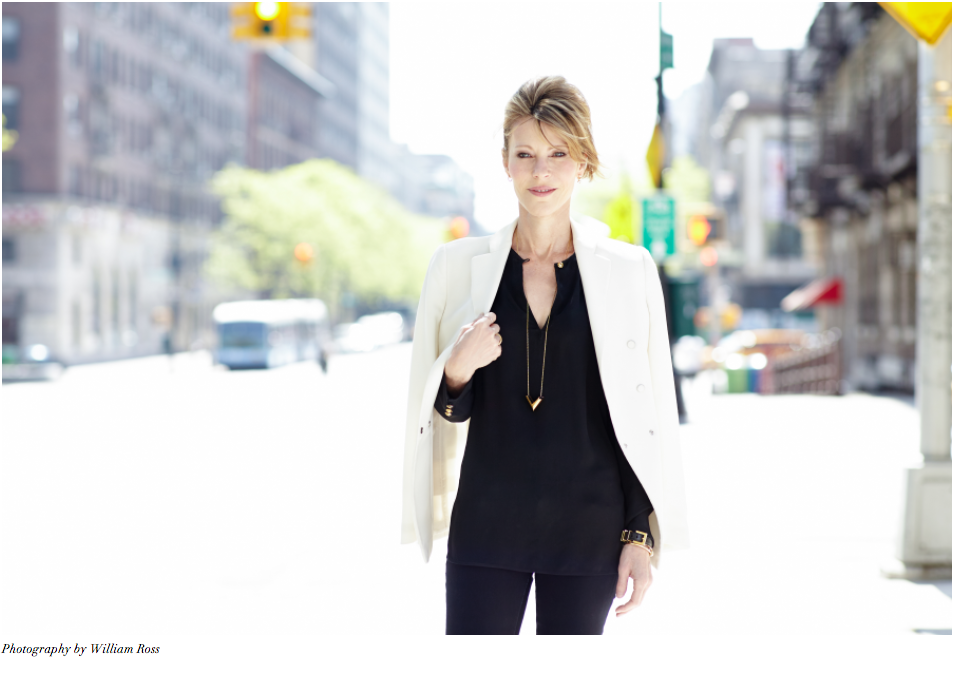 She’s a seasoned editrix with a nose for news. Robbie Myers’ 15 years at the helm of Elle is the stuff that dreams are made of. As the magazine toasts its 30th anniversary, Myers explains how its mission is more relevant than ever.

Of all the subjects that Elle covers, what are your particular passions?
Fashion. We show it, but we’re also very interested in the people who make the culture. When the magazine was launched in Paris in 1945, the founder said that the mission was to open women’s appetites. That’s a great mission, and a pretty broad mandate. We’ve tried to carry it through into 2000, 2010, 2015, and going forward.

What are your favorite kinds of stories to edit?
I love the visual stories. But one of the really good things about Elle is that we use really good writers. With every assignment, we try to put a good writer and a good reporter on a good topic. I hope that we succeed more than we fail. I love assigning and editing Zeitgeist pieces about where women are in the culture, and what’s going on in the culture. We have a real commitment to covering politics, women’s health, and certainly sexual politics. We assume a certain amount of cultural literacy and erudition on the part of our readers, so we don’t feel like we need to explain all the issues, but good writing and good reporting elevates the conversation. I was talking to a very senior person in a very big company, and I asked her, generally, what was going on in the digital world. She was telling me about the technological things they were working on, and then she said, “But, you know, women in San Francisco are really talking about egg freezing and managing their fertility.” I’m like, “Really! We’ve only been covering that for 10 years.” Meaning that women’s media often gets put to the side. We do groundbreaking reporting around things that are important to women, like the science around fertility, because that’s what women are talking about, and what they care about.

Music has been core to you in terms of personal interests, and it’s a major pillar and platform for the magazine as well. How have you seen that evolve over your tenure at Elle?
Elle has always been about where pop culture and fashion intersect. Female musicians are great communicators of style, because it’s organic to most of them—meaning they dress themselves—and their look represents whatever they’re saying with their music. People don’t necessarily separate those things. If you dress X way, you’re saying, “That’s my tribe.” Musicians are real communicators about fashion and style. Musicians are also the voice of young women, and we think they have a lot to say.

You’ve been gutsy with a lot of your recent cover choices. Do you feel a lot of pressure about newsstand performance?
If I put Keira Knightley on our cover, it gets 2 billion press impressions around the world. There’s a lot of interest in our content. The newsstand isn’t considered as important to our fortunes as it once was, but magazine editors still think about it. We like to put women on our cover who are not seen everywhere—and it’s harder and harder to do—who are at an inflection point in their lives.

As the audience for Elle has changed, how have you changed?
I’ve always been drawn to popular culture as a means of a conversation about what’s going on. People at Elle were not into doing Project Runway because it was reality television. My thought was, if people are interested in this, it’s a great way to have a conversation with the culture about what’s going on with the culture around something that we care about.

Does a good editor in 2015 need to have a publishing gene?
Sure. Absolutely. They need to care about how the business is run, and have a strategic take on advertising, marketing, and promotion.

Are you down with native advertising?
My boss, David Carey, has been very respectful of our efforts to make it work in a way that’s good for the business, good for the people who are trying to get their message across in advertising, and good for our audience in terms of being able to be clear in terms of what it is that we’re presenting to then in a quote-unquote native delivery.

How do you interact with Elle.com?
Hearst Digital oversees it, and I talk to them about big initiatives. Leah [Chernikoff] is the editor of the website, and rarely do we disagree about what’s going up. She reports to Kate Lewis, and Troy Young has done an incredible job of getting the audience he wants to get. He’s a very smart, strategic guy. But at the end of the day, if somebody’s unhappy, whether it’s a reader, a user, or an advertiser, I still get the call. There has to be a very open conversation between us about the Elle voice and Elle’s point of view on things. Leah is a strong editor, and she runs the website with great authority.

Are there any topics that are off-limits?
There are lots of stories I’m pitched that I don’t see in Elle, but those are individual stories. Topics are a pretty broad thing—I would hope not. We don’t do a lot on the global financial markets, but if the market is crashing, the website could cover it from an Elle point of view.

Do you ever get tired of fashion—the scene, the shows, the appointments?
Only of bad fashion. I still have the enthusiasm for the feeling of possibility when you enter a show or a showroom. But when you talk to designers, particularly the younger ones who really want to make their mark, it’s exciting to see them work and struggle and figure out their point of view.

I’ve never seen you wear denim. Do you ever wear denim?
Yes, I do!

When do you wear jeans?
Much of the time.

I looked through Billy Farrell and Patrick McMullan, and I don’t recall seeing many jeans or prints…
Those are black jeans. And I’ve worn a print. Is there a picture of it somewhere? Could I prove it? I could, probably.

What do you wear on the weekend?
Those jeans we’re talking about.

Where do you shop?
Net-A-Porter. I don’t have time to go to boutiques—I wish I did. I do have some time to shop in Paris because my children aren’t there and sometimes there’s a little too much lag time between shows, so I’ll run into Givenchy or Céline to see what they’ve got.

Any good memories from your 30th year?
I remember the birthday party that somebody threw for me at an editor at Rolling Stone’s apartment. It was so much fun. I was wearing a black dress, with big gold earrings, and I have a drink in one hand and a cigarette in the other.

E. Jean Carroll told me that you’ve never asked her for advice. Is that true?
I get a lot of advice from E. Jean. She’s turned in her column every month for so many years. I think a lot of people don’t know what a journalist E. Jean really is. She wrote a lot of great journalism in a lot of great places, and sometimes we have spicy conversations about our worldviews. She’s a humanist and a feminist.

She’s one of my favorite Elle voices. What are some of the other marquee voices in Elle over the years that you are especially proud to have cultivated?
I love the work that Daphne Merkin does for us; Lauren Slater; Karen Durbin, a great film critic; Holly Millea. On staff, Ben Dickinson; Maggie Bullock, a great writer; and Laurie Abraham, who does award-winning work. Anne Slowey, when I can get her to write—she’s pretty busy. Kate Christensen writes for us—I can’t claim that we developed her voice, but I’ve certainly appreciated having her and Chimamanda Ngozi Adichie in the magazine. Erica Jong has written for us, too. Again, they have their own voices, and we’re happy to share them with our readers, but I can’t claim to have developed them. However, we often put writers on topics that they wouldn’t have written about elsewhere. That’s really the fun part.

The magazine has had three different creative directors under your tenure there—Gilles Bensimon, Joe Zee, and now Alex Gonzalez. How has the magazine been different in each of those incarnations?
Gilles launched the magazine, and he certainly was the architect of the idea that you could shoot a strong, sexy girl who looked at the camera with intent, but he also shot all the pictures, so in effect, when Joe started, we kind of had to build. In some ways, it was a restart, because Gilles so dominated the fashion well that we had to build the photographer portfolio, not from zero, but Gilles was that history of what Elle fashion looked like. That was certainly one change. Joe brought in Carter Smith, and he’s very cinematic in the way that he shoots, and we hired Paul Ritter as design director, who brought a kind of “pow” and elegance at the same time. Alex brought and has really nurtured Paola Kudacki, who is doing really great work for us, and Liz Collins. And he lured Evan Campisi, formerly of Nylon who also did award-winning work at Entertainment Weekly, as design director. He’s very cool, with avant-garde sympathies, and we’re working on some things now, which I’ll keep under wraps for a minute longer. They all have different sensibilities, but fashion changes every 10 minutes, right? Fashion is constantly in motion, so you want the pictures and look of the magazine to reflect what’s going on right now. So you have to evolve too, meaning the look and the feel, and what we’re talking about and what that looks like on the page.

Excuse the cliché, but what is on your professional bucket list?
CEO…? I drive David [Carey]—and everybody I’ve ever worked with—crazy, but I have this idea that there’s not a lot of credible fashion, with a capital F, on television. It would be great for there to be Elle TV, because we have a very specific idea about women and what they’re interested in. We do the kind of reporting that doesn’t always get applied in the wider world to “women’s topics,” which are in fact human topics, like reproductive health or the wage gap.

When you need to get away from being the editor of this massive brand, what do you do? Are you a nature lover? A surfer? What don’t we know about you?
I really enjoy the company of my children. I only have them at home for a couple more years, and they’re really fun to hang out with. You probably don’t know that I know a lot about Little League baseball. We went to Cooperstown; my son spent a week there playing tournament baseball.

If a publisher were to come to you and say, “We want to publish the Robbie Myers story,” who would you want to write it?
Robbie Myers.