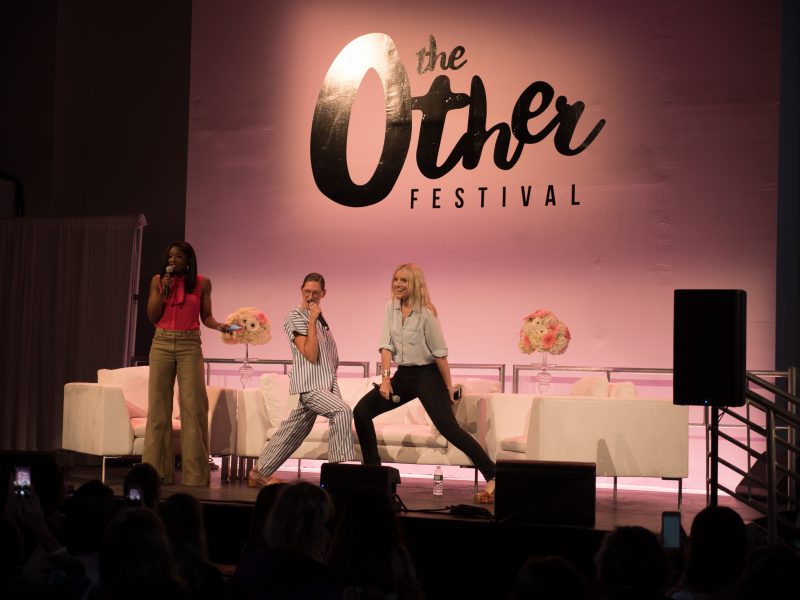 The Other Festival took over Brooklyn this weekend for its second year, where a range of impressive female leaders and influencers took center stage to share their knowledge, experiences, and advice to an audience of entrepreneurial millennials. The first day of the festival, which is spearheaded by founder Dee Poku, kicked off with designer Norma Kamali, who dished on the redevelopment of her brand throughout the decades, as well as explaining why change is an essential element to staying ahead in business. Glamour features editor Lauren Chan talked to model Philomena Kwao, Eloquii CEO Mariah Chase, and designer Becca McCharren about the expanding big business of curves, discussing the importance on size diversity, body positivity, and other relating topics. In the “Digital Donuts” panel, Danielle and Laura Kosann of The New Potato moderated a panel with Forager’s founder Anna Castellani, Amanda Hesser of Food 52, and writer Elletra Wiedemann on the millennial push to eat healthier, eco-friendly foods, as well as consumer trends including healthy tech-based food delivery services.

Day two was headlined by mega bosses Jenna Lyons, former J.Crew president, and Laura Brown, editor-in-chief of InStyle, who participated in the “Telling Your Brand Story” panel with moderator Lola Ogunnaike of Entertainment Weekly. The duo broke down building brands and how the social media age has impacted their careers. One very important topic on the panel’s agenda: why we can’t find Jenna on Instagram! “There are two primary reasons. When Instagram started I had a job, and unlike Laura, I worked for a company that I had to represent something. It wasn’t about my opinion,” said Lyons. “I was finding that I’d meet people and talk to someone like Laura and saw my personal and professional lives were starting to blur and crossover. It became hard because I wanted to take a picture with my friend, but I didn’t want them to be worried if I was going to post it. I decided while I was working that my job was about supporting J.Crew. It was its own brand and I was the support system behind that brand. I decided to lay low. There was also a lot going on in my life—I had a child, I decided to date a woman…I was evolving. I thought it was better to be a little quiet on that end!”

Model/activist Ebonee Davis also headlined a panel titled “We All Win” along with Bethann Hardison in a conversation about diversity. “My experience getting into the industry was that covert racism. It wasn’t white supremacy, but, this lack of knowledge when it came to hair care, when it came to matching skin tones with foundation,” said Davis. “Being told, Oh we already have a girl who has your look, and going into an agency where there’s only three black girls on the board and 50 white models, so it was like, How is it possible that you already represent a girl with my look? The numbers just don’t add up. Being told “you have to change this about yourself” when I made the decision to go natural was hard. My former agency told me that I was going to lose the clients I had and no one was going to want to work with me. I would have to continue straightening my hair if I wanted to keep working in the industry and that my “rolled out of bed hair” wasn’t going to work. It goes back to the lack of knowledge. It’s not white supremacy, it’s pure ignorance. But I stuck with it. I made the decision to wear my hair naturally, and since then, the success of my career has grown tremendously.”

The conference also featured a panel focusing on the balance between staying authentic and generating revenue called “Make Money, Stay Real” with influencers like Cipriana Quann, and a discussion headlined by Stacy London called “Why Anything Goes in Style” where she addressed the Weinstein scandal, noting that a woman’s appearance is never an invitation for harassment, referencing Donna Karan‘s recent statements.

The festival capped off with The Other Music; a series of musical performances by female-led bands and DJs such as Baby Yors, Ravyn Lenae, Tangina Stone, Flint Eastwood, Jess Best, and Alex English, among others. The Other Festival is sponsored by City Point. Media partners are The Daily Front Row, Lenny Letter and Whitewall magazine. Chandon sparkling wine, and Belvedere Vodka are the event’s beverage sponsors. Creative agency Berlin Cameron serves as the event’s branding partner. In support of its partnership with Glam4Good, The Other Festival donated comp tickets to Glam4Good recipients to serve as a learning tool and to empower and inspire the young women in the Brooklyn community.