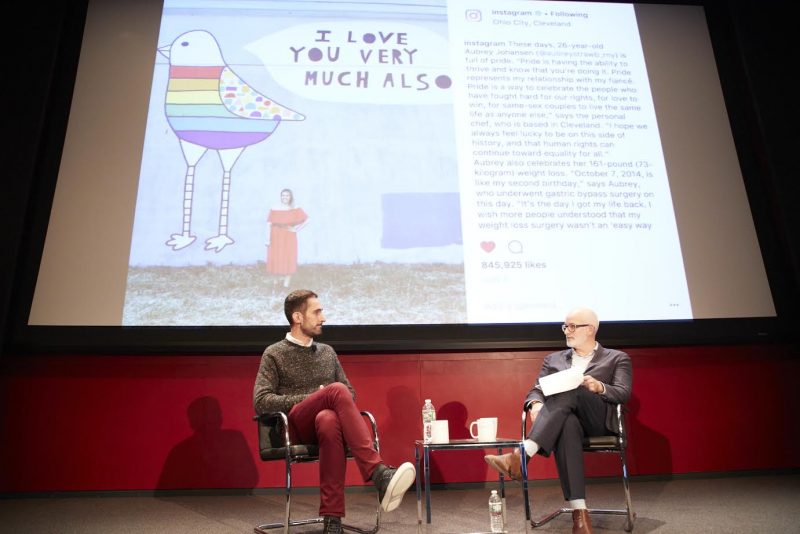 Last week, The Daily went back to school for the ultimate Master Class at Hearst headquarters taught by Instagram founder Kevin Systrom, in conversation with Troy Young, president of Hearst Magazines Digital Media. The brains behind arguably the world’s biggest obsession these days began by breaking down Instagram’s mass appeal. “We’re looking for optimism in the world,” said Systrom. “We are looking for a kind place that makes us feel safe, hopeful, and connected with the people that we care about. Instagram’s mission statement is to strengthen relationships. Mike [my co-founder] and I started the company because I wanted to stay close to my parents and girlfriend. I wanted to know what people were up to. I wanted to follow what people were doing in the world. You come back to it because you love it, not because you think you have to. You come back to it because it makes you feel safe. That’s what we’re going for and I won’t take that for granted. You can easily lose that feeling overtime. I think we’ve been pretty good about keeping it.”

Systrom also discussed why he went for the “follow” model vs. the “friend” model used by Facebook. “It was a huge debate. I can’t remember who wanted what or maybe I’m just being nice,” said Systrom. “I do remember, we were like, Fine we will do the follow model. But as a concession we have to have a little toggle in the settings that will say ‘private user’, which will allow you to switch basically to the friend model to be able to approve the people who follow you. What that did was it allowed people to use it like they were using Facebook, like they were using Flickr and be private but at the same time you can follow a celebrity, you can follow a brand, you can follow an amazing dog. It meant that this behavior could exist on Instagram and it wouldn’t have existed if we had did the friend-only model.”

Check out other fun facts we learned about Kevin below, and watch the panel in full, here.

Last book he read:
The Checklist Manifesto. I skip between books—does anyone else do this?

Favorite filter?
X-Pro II. It was the first one I made. I was on the beach in Todos Santos with my wife. We were talking about this new app and she said, I won’t use it—my photos aren’t as good as your friend Greg. I was like, Well he filters them. She said, Oh you should probably add filters. I literally spent the next 8 hours in this tiny little bed and breakfast researching how to create filters on a dial-up connection.

Podcast?
“How I Built This” and Ted Radio Hour.

Cats or dogs?
Dogs, for sure. Sorry cat people!

Nyma Tang on What the Beauty Industry...