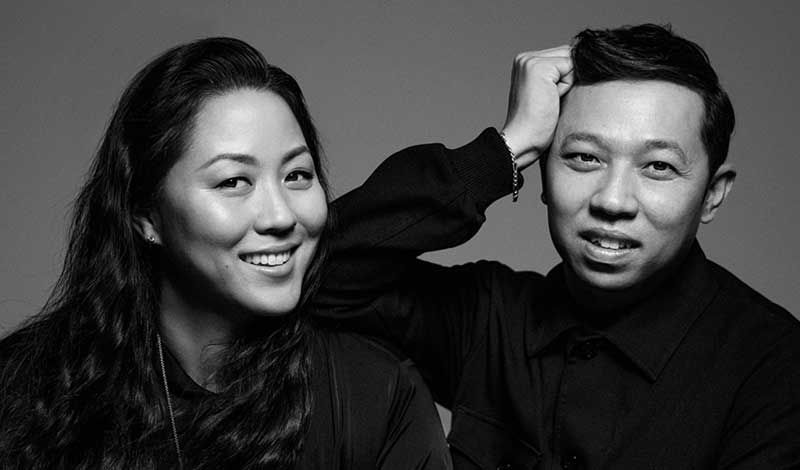 Since its inception in 2002, Opening Ceremony has been New York’s preeminent purveyor of independent fashion. What began as a relatively obscure shop on Howard Street has become a global powerhouse, churning out ready-to-wear collections and influence with equal aplomb. Fifteen years later, OC’s founders Humberto Leon and Carol Lim remain at the epicenter of cool.

Back to the very beginning. How did you meet?
Humberto Leon: We know each other from UC Berkeley. I took painting class with Carol’s roommate, Cynthia, who introduced us.
Carol Lim: We shared the same approach, and he was good at convincing me to go out and do things.

You both had impressive careers in fashion before the genesis of OC. How did the store concept come together?
Lim: While Humberto and I were working in NYC, we decided to go to Hong Kong to visit Cynthia. We hadn’t taken a vacation in about two years. When we were there, we went shopping, discovering young designers and amazing brands. We were super inspired and also kind of naïve. A lot of our friends in New York were doing amazing creative things, but there wasn’t an outlet to support them. We thought having a store would allow us to house all that creative energy, travel the world, and pick different countries to feature.

What was your strategy?
Lim: We built the business and the store around how the merchandise performed. We bought merchandise that we thought would last six months, and it lasted three weeks, so we bought more. We called our friends in Hong Kong, the first city we featured, and they were able to make more.

Any favorite memories from those early days?
Lim: Smoking indoors was still okay, so it wasn’t uncommon for friends to stop by and catch up over a cigarette and coffee. We wanted to create an environment where people could look at everything at their own leisure and weren’t pressured to purchase something. We eventually learned that we could connect with customers in a way that was authentic to us, asking them where they lived and what they did.

Who was the first person who you were shocked to see walk in the door?
Lim: Michael Stipe. Carol and I get so excited whenever someone we really admire comes in: Cindy Sherman, Leonard Nimoy, Beyoncé, Solange Knowles, Björk. We’ve made some great friends from the store, like Yoko Ono, Spike Jonze, Jason Schwartzman, Claire Danes, Jessica Alba. We never felt like a fashion company or brand; we felt like a town square of culture where dancers, filmmakers, and videographers could come in. Baz Luhrmann was in the store, and I mentioned the anniversary of Romeo + Juliet, one of my favorite films, and suggested we do an exhibition with his memorabilia. So we did! When Rihanna launched her River Island collection, she asked if she could debut it at our store. We also picked 20 of our favorite outfits of hers throughout the years for a mini exhibition.

How did the Opening Ceremony collection come together?
Leon: We opened the doors with our own brand. We wanted to design the things that would fill in the blanks. Within our first year, all the things we bought and made did really well. Then buyers asked to buy some of the Opening Ceremony stuff. That was so crazy—we never intended for it to be sold outside of our store. We got just enough requests so that we could do it. We started selling to some Japanese stores, then Barneys New York, and slowly but surely, we were in every major place. But we were always very selective—because we had both the retail and our own collection, we were able to decide who we wanted to have ours.

Many of the brands you’ve adopted have found phenomenal success. What’s the secret?
Leon: They’ve all had an authentic and genuine point of view. It’s a feeling you get when you see their collection. When you see consistency, that’s another big plus, meaning they aren’t a one-season wonder. It’s one thing to show something, but to produce and get the fits right…that’s a whole different ball game.

Which creatives do you find interesting right now?
Leon: Solange, Angela Dimayuga, Rowan Blanchard, Ali Wong, Jessica Williams, Margaret Qualley, and Ashton Sanders are a few people that we love. Rowan, Ali, and Jessica were part of our “Pageant of the People” show. Margaret is an amazing dancer and actress who starred in our first KENZO World perfume campaign film, directed by Spike Jonze. And we just worked on a mini movie with Natasha Lyonne.

You’ve developed some cool alternatives to the typical runway show. When did that begin?
Leon: Our first OC show in 2012 was based on street car gangs in L.A. It was like The Fast and the Furious: Tokyo Drift, but in real life. We had 25 cars full of models coming out onto the pier, and there was smoke and lights. We both look back and think it was a pretty cool-ass show. For Spring/Summer 2015, we did “100% Lost Cotton,” a one-act play written by Jonah Hill. Our “Pageant of the People” show had comedians talking about voting. We got a lot of slack in the early days for doing out-of-the-box shows. People would tell us that the shows were fun, but they couldn’t see the clothes. Our whole point was that you could see the clothes online, and the show was an immersive experience. Ten shows later, it’s kind of the norm.

What does it take to pull off a show like that?
Leon: It’s insane. The craziest part is that Carol and I are doing so much of it ourselves. You would think we had a team of 100 people working on this project.

Was that the most challenging concept?
Leon: They are all difficult in their own sense. For “Pageant of the People,” we were dealing with something touchy, and it could’ve gone really badly. But the audience had fun, and the message felt right. The ballet took a lot out of us. We weren’t doing the production, but we fought hard for all the elements to be there. The outcome was amazing. When things seem easy, it’s never easy.

Did you get any slack for showing off-calendar in January with the Justin Peck ballet, The Times Are Racing?
Leon: We somehow get a pass on everything. On one hand, we are a big sponsor and advocate of every New York designer, and on the other, we’ve always been different, so people tend to expect that.

What are your thoughts on the closing of the Colette store in Paris?
Leon: It’s sad for everybody. Colette was a trailblazer in so many ways. To say [Sarah Andelman] didn’t have an influence on every retailer would be a joke.

It’s a challenging time for retail. How do you keep Opening Ceremony feeling fresh?
Leon: From the very beginning, we built in a yearly refresh button. When we first started, we were living in the days of cookie-cutter shops, and a lot of people felt like we weren’t being consistent. The refresh button allowed us to rethink what we were doing, what we wanted from the store, what we wanted to buy, what brands we were excited about, how we were going to buy these brands differently, and how we were going to find new brands that no one has heard about. We’re not afraid to carry a brand that no one has ever heard about. In fact, we thrive on that. Fast-forward 15 years, and it’s the name of the game. The people who haven’t caught on to that are the people who are not allowing retail to thrive.

Is it a challenge to find totally new brands?
Leon: We’ve become an authority on launching new brands. When a brand or designer is thinking about ideas, they’ll come to us first and say, “Hey, I have this idea. I’m excited about it and I want to launch it with you.” We still do a lot of digging, but a lot of people come to us with amazing ideas.