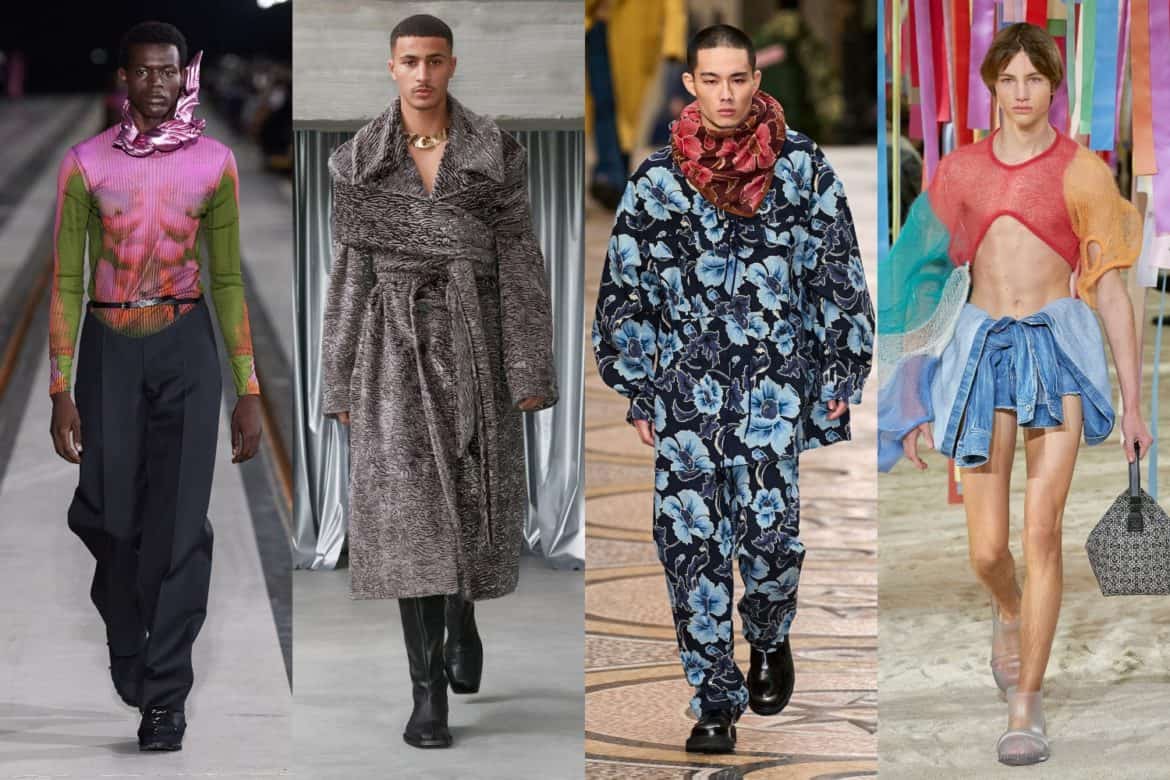 As the Menswear shows come to an end, it’s time to look back and highlight the shows that made us gasp in awe and wonder. From thesps taking to the runway at Prada to designers debuting their collections from within the audience, the Fall 2022 season left us with a lot to talk about. Right this way, please…

The fashion moment of the week during the Milan Menswear shows was undoubtedly thanks to actors, rather than models. Prada’s Raf Simmons and Miuccia Prada presented their Menswear Fall 2022 collection entitled ‘Body of Work’ in reference to the everyday working man. Opening the show was none other than Kyle MacLachlan, followed by familiar faces like Gary Oldman, Willem Dafoe, and Tim Roth—who have all graced the Prada runways in the past. With trench coats, blazers, and jumpsuits, the collection sought to revamp the style of the 9 to 5 worker, albeit at an elevated level. Prada and Simons seem to synchronize their design styles more and more each season, creating a synergy that leaves the audience (at home and IRL) vibrating after every show. With Prada defining the bones of the offering with straightforward silhouettes, Simmons then adds the design details, like his signature prints, to make it all come together. In this case, jumpsuits made reference to work uniforms, similar to that of a plumber, but came rendered in jewel-toned nylon—a fabric essential to the brand’s DNA. Other standouts included trench coats which featured exaggerated shoulders and cinched waists, plus printed utility jackets. Ensuring everything had its ample air time, the A lister models walked in a zig-zag formation through the audience. The show closed with Jeff Goldblum (how else!) in a longline suit jacket with fur detailing and oversized sleeves. It made us wonder: as actors continue to replace models on the runways, is it farfetched to think we might see a major Prada moment on the silver screen soon? One can only hope!

It wouldn’t be Men’s Paris Fashion Week without Louis Vuitton. For their Fall 2022 Menswear collection, the house paid homage to the late Menswear creative director, Virgil Abloh. Set against a backdrop inspired by childhood and imagination, the show served as a final farewell to Abloh by combining a whimsical feel with classic Vuitton codes. Oversized streetwear, sharp men’s tailoring, and soon-to-be collector’s item accessories paraded down the runway as the venue filled with the sounds of a playlist scored by Tyler The Creator—a close friend of Abloh’s. The looks were logo-mania heavy; a reoccuring theme the designer had deemed essential to capture customers in the current market, while others bore pieces of artwork that had been turned into prints. Abloh’s sense of fantasy was still very much present in the collection, with his instantly-recognizable bunny ear hats making a return, amongst novel ideas like small leather bags in the shape of paint cans, while paying tribute to the maison’s rich history by bringing back the Vuitton warped trunk bags. The show closed with models wearing all white ensembles paired with giant angel wings made of lace; a poignant visual reference to Virgil’s spirit finally moving on from the Louis Vuitton runways.

Although Rick Owens has created signatures that are deeply ingrained into his every collection, the inimitable designer still manages to give us something new to talk about each season. On our lips for Fall 2022 Menswear? How he showcased his latest in a flash of brilliance—literally! Models wore fluorescent lamps on their heads in the form of what can only be described as a helmet. As if that wasn’t enough, the entire runway was engulfed in strobe-style lighting, which only made the lit up headgear stand out even more. The looks on the runway commanded as much attention as the lights, with their sharp edges, deconstructed tailoring, and of course, the infamous Rick Owens Kiss boots making their seasonal appearance. One question: how the photographers manage to compete with all that flashing?!

Front row at your own show? It could only be Nigo’s hyped debut for Kenzo

Nigo has finally landed in Paris, and in what’s arguably a first, he decided to watch his own debut at Japanese fashion brand Kenzo, while sitting in the front row. Why not! Since the pioneering streetwear designer was announced as Kenzo’s newest creative director back in September and the industry has been antsy to see his take ever since. Luckily, his inaugural offering was nothing short of star-studded, both on and off the runway. As a blur of maximalist prints walked down the catwalk, they were almost overshadowed by the faces in the front row: Pharrell, Julia Fox and her beau Kanye West, as well as Tyler the Creator and Pusha T. The styled outfits were a combination of layered, printed, and monochromatic looks juxtaposed with more conservative menswear styles. After the finale, Nigo stood from his seat amongst the crowd and gave his bow, much to some audience members’ surprise. If the celebrity attention that he’s garnered already is indicative of the future, consider this the hot ticket of seasons to come.

As part of Jean Paul Gaultiers’ couture collaboration series, the famed designer will next enlist the help of Glenn Martens for Spring ‘22 couture. In a possible attempt to give us a sense of what’s to come today, Martens infused some of JPG’s secret spice into his Fall 2022 Menswear collection. Using his signature trompe l’oeil body prints and penis pants, Martens combined his own innovative design style with that of the legendary couturier. Said prints were presented in contrasting colors, similar to a negative film reel, in familiar silhouettes like maxi dresses, tank tops, and even skirts; while some models walked down the runway in risqué looks that made you think they could be baring it all in front of the audience. Scarves were made of reflective metal leather and had metal wires on the inside, allowing the shapes to be bent and played with—talk about interactive fashion! The playfulness and fun of the collection could be seen even down to the shoes, which were stiletto pumps with lobster claw-shaped toes. This small taste of a genius union between Martens and Gaultier has left us all salivating.

J.W. Anderson wins MPFW with lights and buttons at Loewe

Fashion isn’t a competition, but if it was, J.W. Anderson took home the gold thanks to his Fall 2022 Menswear collection for Loewe. Proving that his creations are less fashion, more wearable art, Anderson showcased a combination of sensory details encapsulated in next season’s looks. At every turn of a model, there was a new detail to explore. As they came down the runway it was clear that something dynamic was happening with the garments. Lights which twinkled out from underneath mesh tops and bodysuits, as well as coming built secretly into coats and jackets, were the first visual surprise. Buttons that had not been sewn on top of garments, but into them, followed. Asymmetric t-shirts and shorts, with accompanying wide arch pocket compartments, really got the audience going even before the midway point in the show. A firework display of design details took over the show space, with each new look offering a new hook for the audience to latch on to.Think: heart-shaped balaclavas, screaming face t-shirts worn inside out, giant metal word plates on a pair of jeans, and warm glowing light radiating from inside of jacket sleeves. This menswear show was anything but boring.

One to watch alert! German fashion brand GmbH has presented us with yet another look into its world, further solidifying its identity as well as galvanizing even more followers. As a relatively new brand (it debuted for Spring 2018), Serhat Isik and Benjamin Alexander Huseby, the Berlin-based duo behind GmbH, have been working tirelessly to let their audience know who they are and why they stand out, and it’s safe to say we’re lapping it up. Using a now-signature crisscross tailoring technique, GmbH has added a feminine twist on a masculine collection. Although the Fall collection didn’t partake in the exposed shoulder moment from Spring, the crisscross is still a common characteristic—this time seen in the form of kimono-style wraparound blazers, fur coats, and even a fur shawl-like application. Sure, tailoring was front and center at this show, offering clean lines and silhouettes that are ready for an executive board room meeting, but pairing jackets with no pants or thigh-high boots (NSFW!) really gives the audience a sense of who GmbH creates their clothes for. Towards the end of the show, models walked out in looks that were covered in calligraphic Arabic as a nod to the designers’ religious schooling and the tension that their heritage has often created for the two queer designers. As GmbH continues to share their story with us, you can be sure we’re listening.