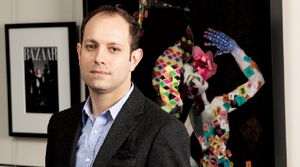 (NEW YORK) Harper’s Bazaar’s new executive editor, Stephen Mooallem, formerly of Interview, might not be the most quotable or quirky editor in fashion, but he definitely gets the job done.
BY ALEXANDRA ILYASHOV

How did you end up at Bazaar?
It was something [editor in chief] Glenda Bailey and I had been speaking about for some time. I had been at Interview for almost 11 years, which sounds like a long time, but I actually got to work with a lot of different people. I had already done a lot there. I started when I was pretty young.

So you felt ready to leave?
There were other things I wanted to do that you couldn’t really do at Interview, and this job offered the chance to work with another set of great people, like Glenda and [publisher] Carol Smith, who do a tremendous job, and [creative director] Stephen Gan, whom I’ve always admired from afar. Those things, combined with the way Bazaar has transformed itself dramatically in the past couple of years, were too much to pass up.

What were the pros and cons?
It’s very different, so it was obviously something I thought long and hard about. But once I came to the conclusion that this was what I wanted to do, it was very easy.

How fashion-y are you?
At this point I feel very, very comfortable in the fashion world. This is a deep dive in different ways. It’s more of a pure women’s fashion book versus Interview, which was always sort of men’s and women’s equally. There’s a very defined audience for this magazine, and it expects certain things. Bazaar has always been about creating incredible imagery, but there’s also that strong service element. There’s a lot of warmth and humor, and it has its own very specific perspective. That was very attractive to me.

Will you miss the men’s stuff?
There’s so much going on here that I’m not really thinking about missing anything right now.

How’s the downshift from EIC to executive editor been?
It’s actually kind of great. This is a very different project. If I were going from Interview to a magazine that was similar, it might feel a little more dramatic, but Bazaar is a different animal, with a much bigger audience. I think the job that Bazaar is here to do, and the way it’s positioned in this company and within the world of fashion books, is just really interesting. Scale is part of it, being part of a big company.

What’s Glenda like as a boss?
Great. Perfect. Super open, super warm. I think one of the things that’s really gratifying about working with her so far is her enthusiasm for the subject. It’s really fun to work with, and work around.

You’re one of the few guys at Bazaar. How’s that going?
I’m not sure what the head count is, but, yes, we’re definitely outnumbered. But it’s all just smart people here, people who really enjoy what they do and have a lot of passion for the magazine.

You were a bit of a surprise pick for this gig. Thoughts?
I think I probably come to it with new eyes in a certain sense. This magazine has a tremendous legacy as a fashion magazine but also as real cultural barometer. In addition to the service and the beauty and the news, it’s always been on the pulse of what’s happening culturally. That’s sort of the stuff I’m here to work on. I had some good luck with that in the past at Interview.

Translating the zeitgeist?
Yeah. This magazine has a tremendous history of working with people like Salvador Dalí, Francis Bacon, Andy Warhol—the list goes on and on, all the way to Cindy Sherman. They’ve done a lot of things like that. One of the things I’m going to be focused on a lot is features coverage and how the magazine tackles things in the context of fashion—the fashionable world that Bazaar covers. The old barriers that existed between fashion and the art world and the music world and the film world have dissolved. They’re all combining and mixing and coming together in many different ways. Musicians want to be fashion designers, designers get inspired by musicians, artists create works for fashion houses. I’ll be working with that energy and making sure the pages of Bazaar reflect that.

Imran Amed, All Up In Your Business