Imran Amed, All Up In Your Business 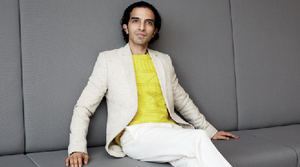 (NEW YORK) Business of Fashion founder Imran Amed has an eye for design, a consultant’s flair for data, and very patient investors. We spoke to the self-described “fashion nerd” as he moved his blog from the sofa to the conference room.
BY CHRISTOPHER TENNANT

When did you launch Business of Fashion?
It depends on what you define as launch. I actually never really launched anything. I started writing BoF as a blog from my sofa back in 2007, but never in my wildest dreams did I think it would turn into my full-time focus. I was interested in the industry and had just transitioned from working in management consulting. Writing stuff down was simply a way of trying to make sense of what I was seeing.

Were you in the fashion space?
Not at all. I was at McKinsey, the consulting firm, working across lots of different industries in lots of different parts of the world. I had never really been exposed to fashion, but I grew up in the performing arts and I’d always been interested in figuring out how I could take my analytical business skills and apply them to a creative industry. I looked at music and television, too, but for whatever reason something kept drawing me back to fashion.

Did you raise money?
Not at first. We raised some money earlier this year, which is when I moved BoF from my apartment to a real office and it became a properly structured business. For six years, though, it was a side project.

I expected an English accent.
I’m Canadian, but I moved to London in 1999. I have a British passport now and have been living here on and off ever since. This is home now.

So, what’s the play with BoF?
About a year and half ago, I decided to kick things up a notch. It had become pretty clear from the market response we were getting, and the unsolicited interest from investors, that there was something of value here, but it needed to be completely restructured in order for me to scale it. The numbers told the story. We have over 50,000 subscribers to our daily newsletter, over a million social-media followers, and about half a million visitors to our website every month. In addition to the redesign, we also started a new project in September called the BoF 500, identifying the people who we felt were shaping the global fashion industry. We’re a mix between an authoritative newspaper, a high-end fashion magazine, and a real-time conversational blog. We’re not trying to be snarky, aggressive, or sensationalist to get spikes of traffic. We’re trying to do really responsible, thoughtful, analytical journalism. I think people both inside and outside the industry appreciate that.

What are your priorities for 2014?
Scaling the community and the audience. We’ve tripled traffic this year and hope to continue scaling toward critical mass. After that, we need to think very carefully about the right monetization options. In the meantime, there are all sorts of things we can do, like sponsorships and the BoF 500. I’m lucky that we have a very patient and long-term group of investors who really see the future of BoF as being something very big and important. I’m not in any rush.

What was the response to the BoF 500?
People really embraced it, maybe because it’s positive and it celebrates the industry. We’ve always been very celebratory in terms of the way we look at fashion. It’s nice to know people are attracted to that.

Did you get any blowback from people you left off the list?
A little bit, but not from anyone we hadn’t carefully considered.

The fashion industry is so small, and you depend on fashion advertising. Do you find it hard to be critical?
As the prominence of the website has grown and we’re all connected to more people in the industry, that’s something I’ve been very conscious of. But I think even the people we have relationships with have come to understand that sometimes we publish things they might not like. They respect what we do.

Do you ever feel like an adult in a kids’ business?
I wouldn’t put it that way, but sometimes fashion does feel a little bit like high school. But we’re not trying to be friends with the cool kids. We’re fashion nerds, and we’re trying to do our thing in a respectful, smart, professional way. Unlike in high school, nerds are shaping the future not just in the fashion industry but everywhere. I think that nerds are on the rise. So we bring a little bit of nerdiness to what we do, and lo and behold, people really respond to it.

The BoF was a pretty nerdy exercise.
It was! It involved building a massive database with thousands of inputs. But we presented it in a beautiful way, so the industry engaged with it. Very early on I realized that no matter how good our content was, if it wasn’t presented beautifully, many people wouldn’t pay attention to it. So we spend a lot of time debating design issues and topics in our office. Fashion people can’t stand to look at ugly things.

Has it gotten easier to meet the cool kids?
Access has never been easier or better. When we profile people, very often they tell us no one has ever understood them or what they’re trying to do the way we do. We’re really good listeners. The best thing about my job is that, considering the fact that six years ago I knew nothing about the fashion industry, I’ve had the opportunity to sit down with and learn from the people who make this industry tick. Every day people are teaching me stuff, and I’m building more of an understanding about how the whole world works and about the forces that are shaping it, and how it might look five years from now. It’s kind of incredible.