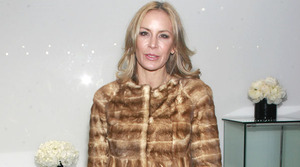 (NEW YORK) Dee Hilfiger is launching a new luxury handbag line called Dee Ocleppo. Hilfiger, who is married to Tommy Hilfiger, used her maiden name for the new line of carryalls. This will be Dee Hilfiger’s second foray into the accessories business. Her first stab at the notoriously competitive but lucrative market was with a handbag line called Deesigns by Dee Ocleppo, which were introduced via HSN in 2011 and affordably priced around $100.

Hilfiger’s HSN line was inspired by a childhood bag with a reversible cotton cover for versatility. Her new line will feature that same function—except this time around, the bags’ covers will be made in exotic skins and furs. So, who’s her first customer? Prior to arriving at Saks Fifth Avenue as the luxe department store’s new president, Marigay McKee took an appointment with Hilfiger while she was chief merchant at Harrods in London and exclusively snatched up the line for Spring 2014. For Fall, Hilfiger will be launching her first full collection for Dee Ocleppo in her new showroom on Fifth Avenue. The line will include everything from shopper totes and clutches to cross-body bags in fur, python, crocodile, ostrich, and suede. Prices for the luxury handbag line will range from $595 to $12,000 and will hit stores in late August and early September at both Harrods and Saks Fifth Avenue, as well as online at DeeOcleppo.com.

Look of The Daily: Katy Perry in Versace