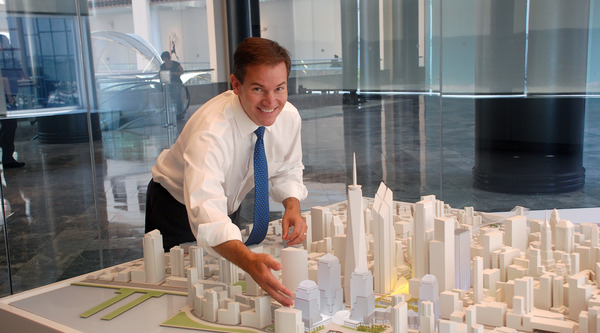 (NEW YORK) As Condé’s chicettes descend upon lower Manhattan to fill their shiny new One World Trade Center digs starting this November, a klatch of high-end retailers will open up shop at Brookfield Place in the former World Financial Center space, right across the West Side Highway, in early 2015. We rang up Ed Hogan, Brookfield Place’s national director of retail leasing, to discuss the exceedingly upscale shopping, featuring the likes of Salvatore Ferragamo, Diane von Furstenberg, and Michael Kors, as well as the smorgasbord of eateries heading to the tip of Manhattan this May. For those fretting the farewell to 4 Times Square, the ability to fetch some fresh Burberry (delivered to your office, to boot) with your Umami Burger doesn’t sound too shabby…
BY ALEXANDRA ILYASHOV

How long have you been scheming up Brookfield Place’s retail scene?
The 25-year-old [World Financial Center] retail center never really performed to its potential. I really took on the role as the developer, working with the in-house design team to transform the place into the most exciting retail space in all of Manhattan. It’s been a labor of love for seven years.

How’d you nab such top-tier retailers?
Burberry was the first luxury tenant to sign on board; that helped us pass our first hurdle with getting a luxury brand. Hermès was a huge tenant to sign, and it’s a brand that others follow. We haven’t just thrown the net out to everyone and said, “Come to Brookfield Place!”. We were very deliberate and thoughtful in the curation of retailers.

Why does the area need über expensive retailers in the vicinity?
Since 9/11, what’s happened downtown has been truly transformational on all fronts, from the type of office workers, to the growth and explosion of residents, to the phenomenal tourist population. Between 2010 and 2018, $20 billion dollars of new construction will happen, from Broadway to the Hudson River. There are now 60,000 people living below Chambers Street. The population has doubled. Pretty much everyone that’s moved into the area is paying full market housing, which is the highest in the city. And to the north is Tribeca, which has approximately 50,000 residents. So, you have over 100,000 wealthy residents within a 5- to 10-minute walk of Brookfield Place.

Fancy crowd. How picky did you get to be in terms of retailers?
We have 250,000 square feet of retail, so we had to be very selective in order to put together the right critical mass of retailers. It’s nice that we didn’t have a 1,000,000-square-foot mall that we had to fill. There’s no filler. Everyone had to be relevant and additive.

Are there any slightly more affordable labels to balance out all that Hermès and the ilk?
[Brookfield Place] is not necessarily going to address people looking for cheap goods—on Broadway and Church Street, you have Century 21, Urban Outfitters, and Zara, and Westfield is doing their underground retail mall. We’ll have the luxury collections.

Have you had a lot of people request to open stores in Brookfield Place?
We’ve had a lot of inquiries. We met with brands that were on our hit list, and we’ve also had a lot of brands reach out to us directly. It’s funny, for the first five and a half years of this seven-year project, all I did was sell downtown!

Did Condé Nast’s editors weigh in as you plotted Brookfield Place’s retail landscape?
There was no focus grouping, but we did speak with various people at Conde Nast, and found out what editors wanted. There was a lot to learn! Everyone had a different opinion; there wasn’t one persistent brand.

Will Brookfield Place businesses have loyalty cards for Condé Nast or Goldman Sachs employees?
There really isn’t anything like that in the works.

Gotcha. Any perks to share?
We’re developing a concierge program with a number of luxury brands. You can do valet parking. You can also have your luxury items sent to your home country, hotel, or home when you’re done shopping. We’re looking at language services, because we know we’ll have global tourists coming to Brookfield Place. Also, a lot of people want to take an hour to shop during their lunch break, and it’s really the only time they have to shop, so they can have those packages mailed back to their house.

Who’s your biggest priority: local employees, residents, or tourists?
For it to truly be successful it has to appeal to the residents first—that also includes people that live along the Jersey and Brooklyn waterfronts, which have a lack of retail space. It was really important to us that we weren’t designing a retail center or neighborhood for tourists. If you work and live downtown, running to midtown or even Soho is about as convenient as running to Philadelphia.

Where have you contended with the most dissent while working on the project?
People that live downtown have been the hardest to sell the idea to. They have a very solid opinion of what the World Financial Center is. Until they agree to meet and see why the World Financial Center is not going to be what they know it as now— after we spend $250 million dollars—it’s hard to convince someone of something they think they know the answer to without knowing all of the facts.

Let’s talk food. How did you create your dream food hall?
They were clamoring to be here, especially the fast casual food. There was no selling them that downtown was the place to be—they knew they wanted to be downtown. We looked at the best in class: chefs doing interesting things, balanced out with vendors that we knew were doing phenomenal sales in volume. We looked for the right chefs that are also the right business people. Not every chef artist is willing to make their dish fast enough to handle the crowds. There are 14 different eateries with distinct tastes in Hudson Eats.

Do you expect a lot of Condé power-lunching to go down?
I would think so! The caliber of chefs we’re working with are ones that the Conde Nast people write about in their magazines…

What kinds of grub can we expect?
One of my favorite places in the city Olive’s on Prince Street—it’s a husband and wife team, and they’ve been there for over 25 years. We really wanted them to be part of Hudson Eats; we spent a lot of time getting to know them. We had to convince them that they’re going into a very special fast-casual experience, and that their neighbors would be of a certain caliber. One of my favorite places is [grilled cheese restaurant] Little Muenster—they’re on the Lower East Side. I think it’s going to be very popular.

What else is on the menu?
In addition to Hudson Eats, we’ll have 400 outdoor tables and chairs at Le District, which is like a French Eataly. It was created by Peter Poulakakos of Harry’s Pizza Bar and Financier, and he’s now redeveloping a restaurant at The Ritz-Carlton. Despite all that he has going on, Peter told me that Le District is his favorite project. We’ll also have one fine dining restaurant, but the majority will be comfort food from great, high-caliber chefs.

Which eateries do you thing will have the longest lines?
Sprinkles always has huge lines—by the end of the lunch rush it will be the biggest line. We all saw the lines of Umami Burger when they opened their first NYC location earlier this year, and they’ll be. Mighty Quinn’s is another place I can go on and on about; it’s rated one of the best BBQs. We’ll also have Chop’t, which is historically a very popular place.

Sounds tasty. Lastly, will those beloved palm trees in the Winter Garden stay intact?
They will remain as a signature, but pretty much everything else will be redone.

Meet the Restaurateur Behind Le District at...

The Fashion Media Awards: All of the...