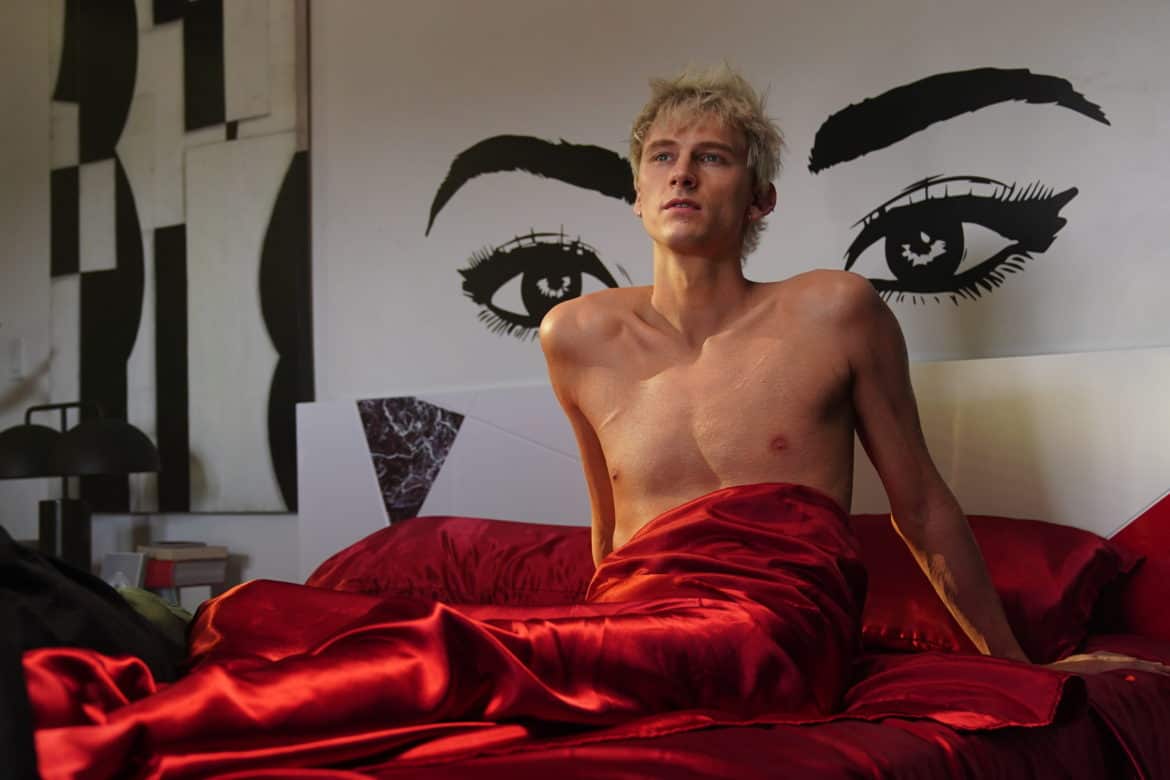 Since first meeting him in 2016 at an intimate dinner THE DAILY hosted at The Maidstone in East Hampton, we’ve always had a special place in our heart for Colson Baker, who went on to global stardom as Machine Gun Kelly. Now one of our favorite dinner guests ever is co-writing, directing, and starring in his first feature film, Good Mourning. He’s also about to embark on his biggest tour ever this summer. We always knew Baker had big style, but could a fashion line be next?

Colson, how are you? We first met at a dinner in the Hamptons a few years ago!
I’m good, I’m good! I remember!

Good Mourning is so funny. Tell us a little bit about what your character goes through in the film.
It’s essentially art imitating life. In real life, I got a text that I was confused by from my now-fiancé [Megan Fox], but this was before we were dating. I was trying to interpret it and I went to all my friends for relationship advice, the ones who weren’t in relationships, and their advice led me down the wrong path. The movie is essentially encouraging one to just laugh. It deals with the choice between your career and your personal life. We say this quote in the movie, “Save the world, lose the girl.” There’s a lot of irony happening.

You and your friend and collaborator, Mod Sun, co-directed the film. How did you divide and conquer the duties?
I’m the moody one. He’s the happy one. I’m extremely meticulous when it comes to how we’re telling the story. He’s very much the person who will throw a million ideas out to land the perfect one. It’s essentially yin and yang. If both of us were the exact same, it would have imploded and so many ideas would have been shot out that we’d just film a bunch of stuff and have too many puzzle pieces for us to make an actual picture. 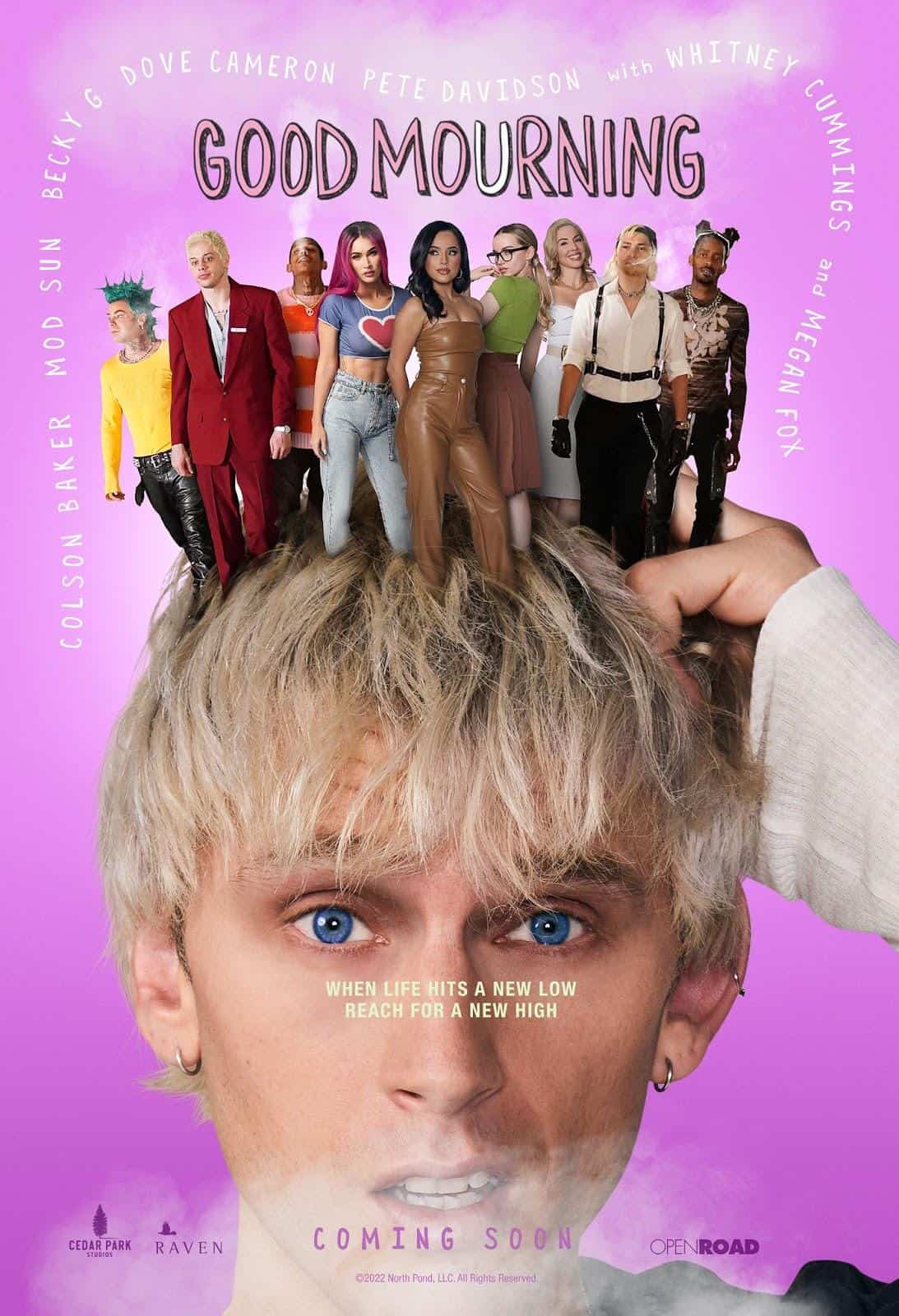 What was it like to watch yourself on-screen as the director? Were you critical?
It was entertaining! I had to let go of criticism of my own performance in this one. I didn’t want to play [Baker’s character] London Clash. I just wanted to be the director, but it was my story. But I wanted people to see me in a different light than Machine Gun Kelly, and I had to create my own opportunity to be a lead in a comedy. I can’t see a studio or a director saying, “Do you know who our first choice is to be a lead in a comedy? Machine Gun Kelly?”

People have always said that comedy is harder than drama. Did you find that to be the case?
I didn’t. They must not be having fun on set. We couldn’t stop laughing. When you have people who aren’t coming in with egos, which was fortunately the case with this, it was almost like having a party every day.

You and Pete Davidson are great friends. What was it like working with him on this film?
Hilarious. We always do cameos in each other’s movies. The studio was pretty positive that I wasn’t going to get him to do the film because he was shooting another movie at the same time. His team said it was unrealistic, but he wrapped his movie the midnight before our shoot day and he got on a plane and came. He was there in the morning and shot a 16-hour day with us. The only reason the day took so long was because he had us laughing so much!

Are you hoping this movie becomes a stoner classic?
Absolutely! To join the cult-classic stoner category would be an honor. 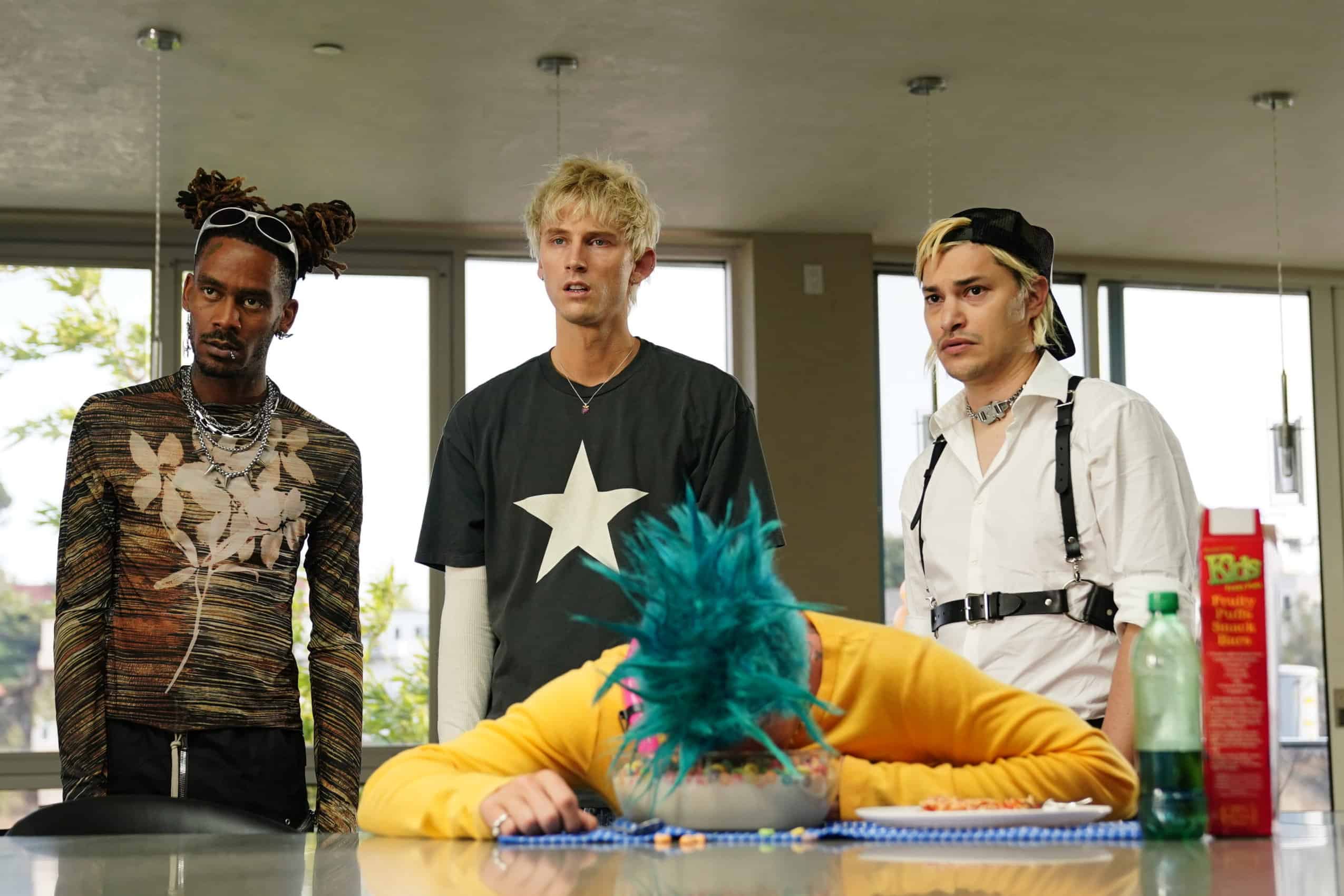 The cast of Good Mourning

We’ve never ever asked this question before, but…what are some of your favorite stoner movies?
Grandma’s Boy, Friday, Superbad, Pineapple Express…

You’re on tour this summer. What’s the show going to look like?
It’s the biggest production I’ve ever had. It’s hopefully one of the biggest productions in touring history. I’m going big! It’s very photo-friendly and something that doesn’t blow its load in the first three songs. It’s going to be something that you have to stay the whole concert for.

You presented an award to your stylist, Adam Ballheim, at our FLAs a few weeks ago. Your speech about him was so lovely. A favorite of the night!
Wow! That’s cool. I actually didn’t write a speech. I wasn’t aware people were going to come with such planned speeches, so I reached into a real place right before I went up [to present]. I’m glad it came off as genuine, and it definitely was. My relationship with Adam is one of high expectations from both of us. I had a long conversation with him yesterday that we’ve developed a look that people are used to and now it’s time to completely wipe that slate clean. The next project for me and Adam is starting completely over. [The FLAs] and the award for him were a closer to that chapter, and now it’s a sign to inspire us to go win it again. 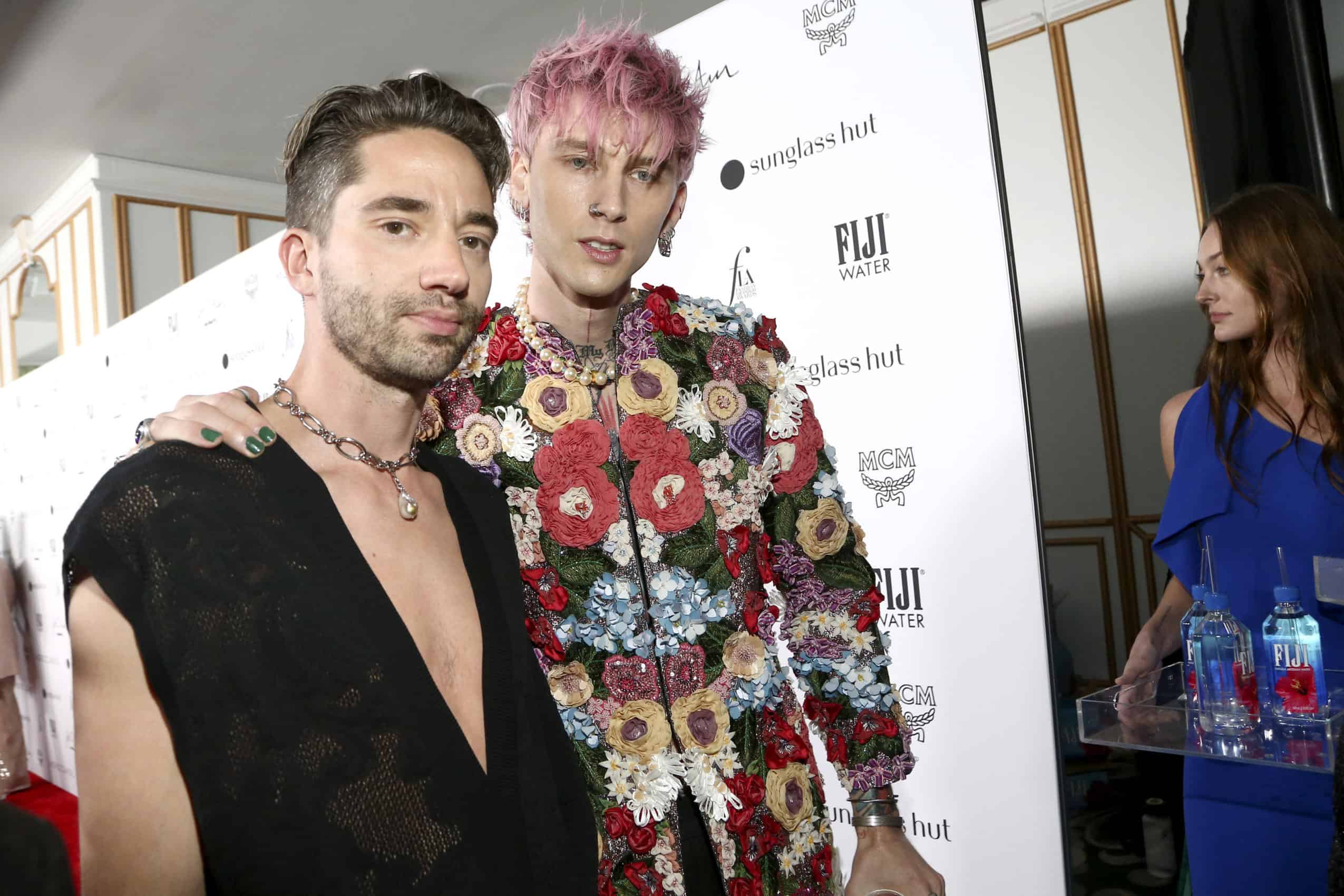 Do you ever want to drop your own fashion line? What would it look like?
My ideal line will be like Rick Owens mixed with Dolce & Gabbana. I can wear Rick Owens to bed, I can wear it out, to the grocery store, to a concert. I’m tall and I love the ghoulish look. 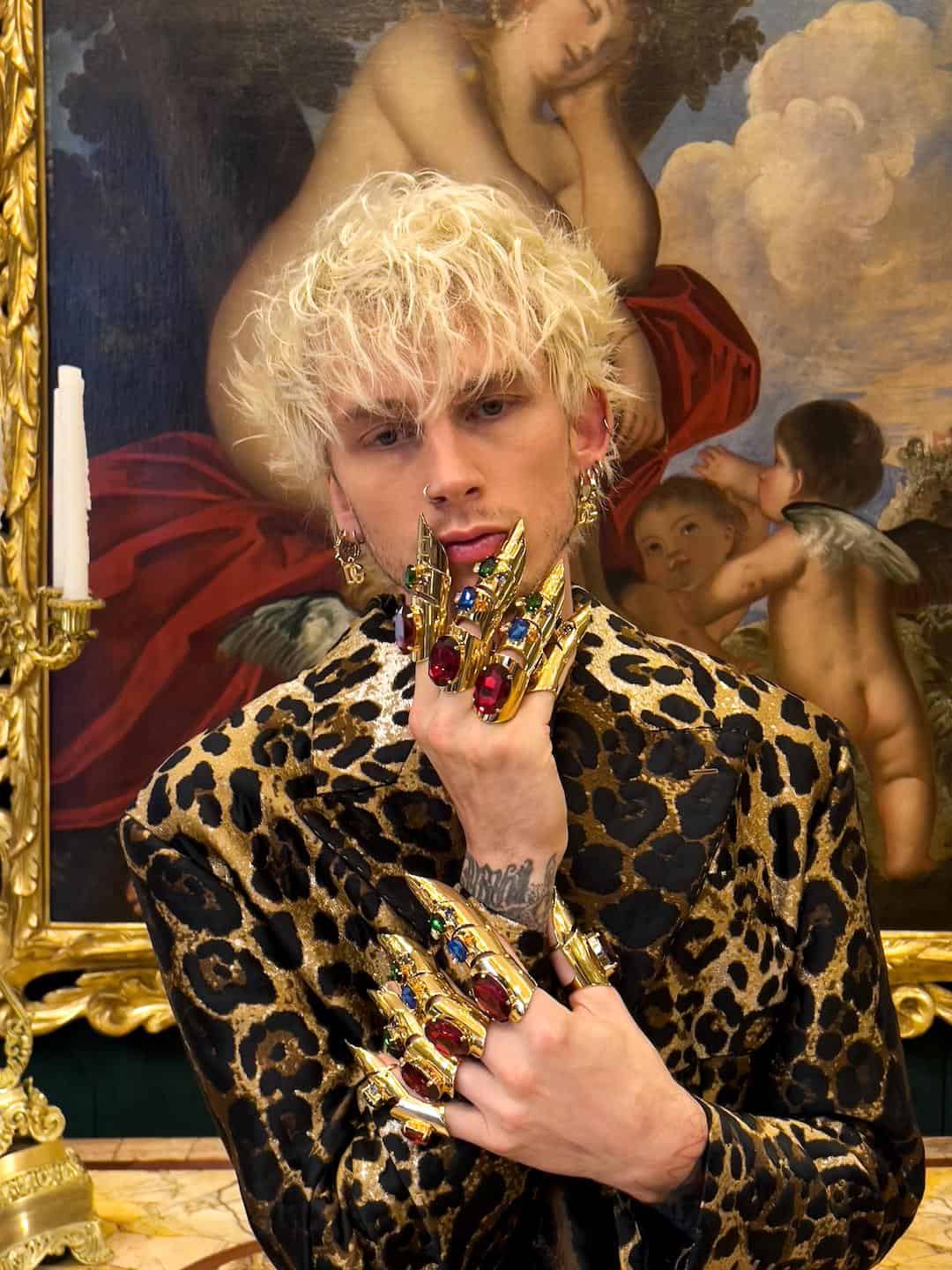 You’re such a special guy. It’s been so awesome seeing you succeed since we first met.
Thanks! I appreciated your awards show. That was fun. I really enjoyed it. I was speaking from a real place and I got something off my chest that I wanted to say that I didn’t even know I was needing to say. I appreciated that. Thank you guys so much for having me.