Calvin Klein’s Former Assistant Wrote a Musical About Him 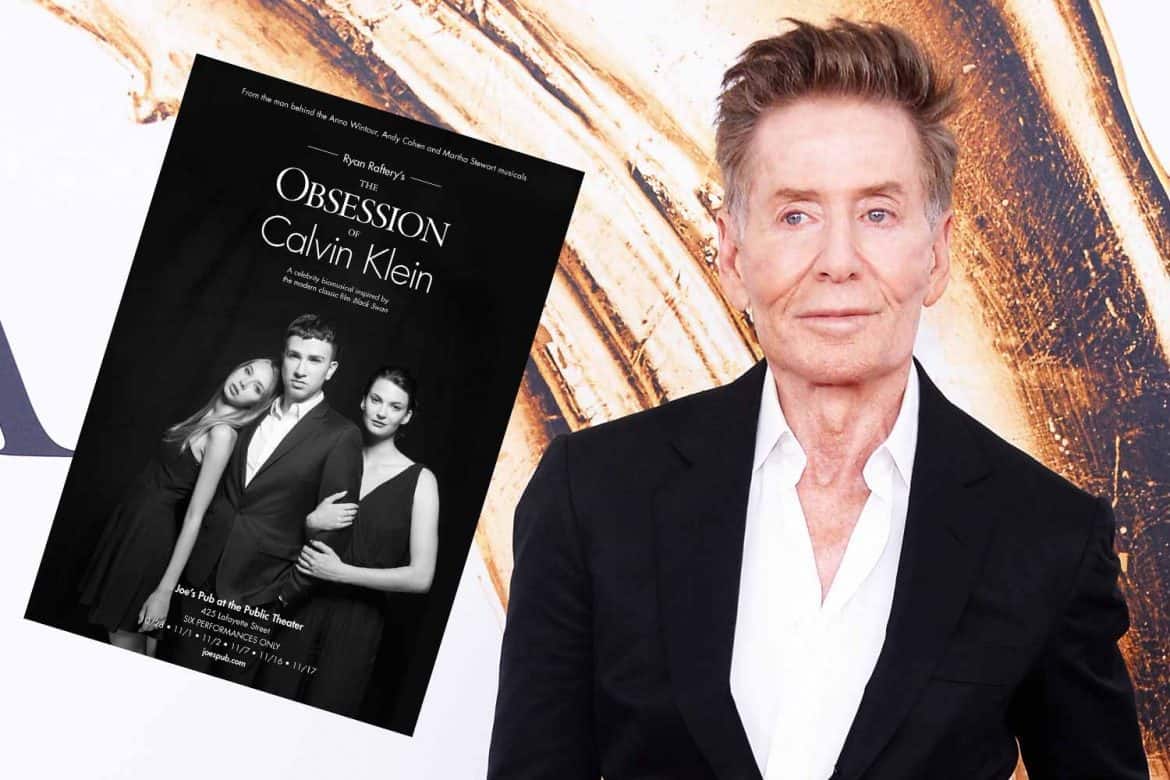 After taking on Anna Wintour, Andy Cohen, and Martha Stuart, actor Ryan Raftery is now setting his sights on another iconic figure: Calvin Klein. The Obsession of Calvin Klein, produced, written, and starring Raftery is a musical about the designer and comes to Joe’s Pub later this month for a limited run. We caught up with the actor to get the skinny on the plot and see if Calvin’s ordered a pair of house seats yet. 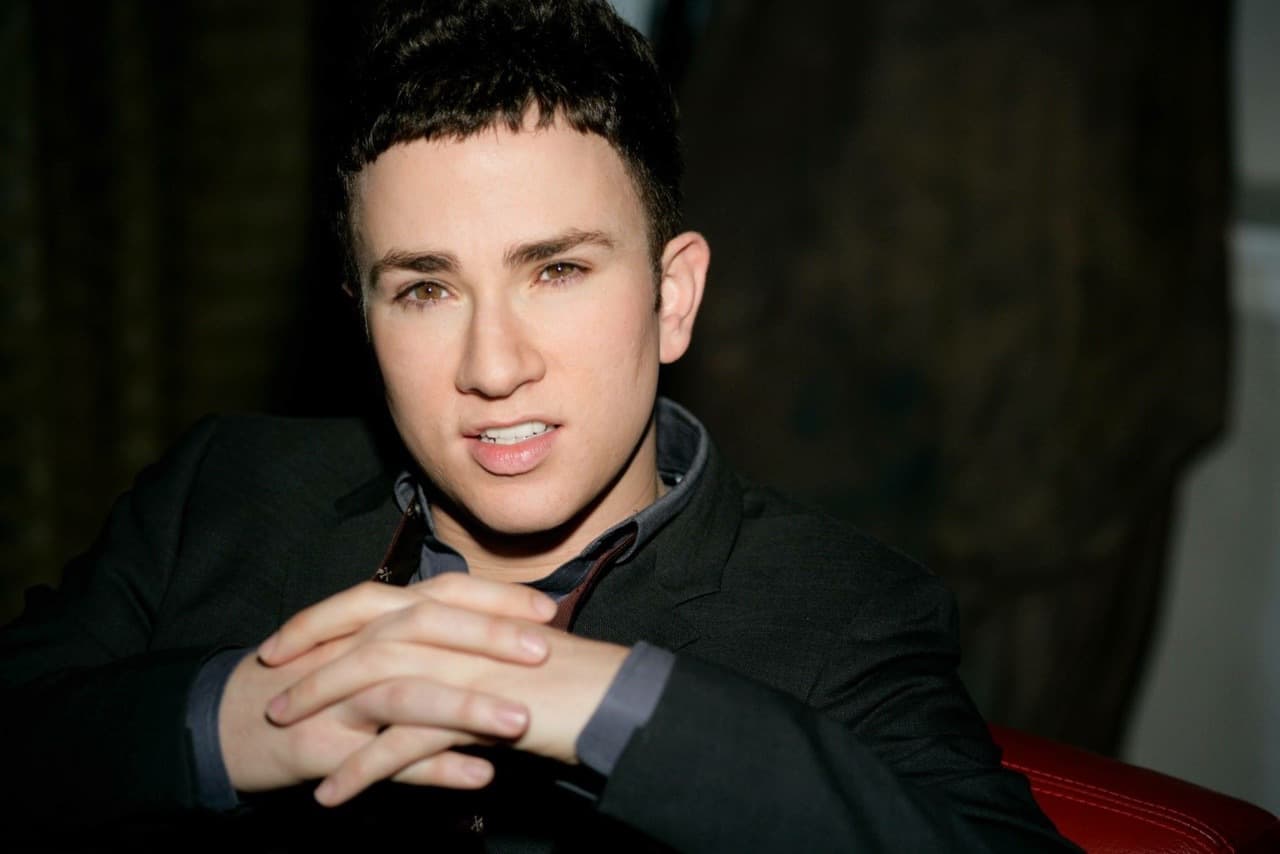 What’s the plot of the new show?
The Obsession of Calvin Klein was inspired by own personal obsession with the movie Black Swan. I wanted to write a show about the pressure artists feel to create. No other type of artist feels that as intensely as fashion designers, because they are all on the same creation schedules that revolve around various international Fashion Weeks. Once I found out that Calvin and Ralph Lauren grew up in the same neighborhood in the Bronx and knew each other,  I was massively inspired. In my show’s universe, Calvin is preoccupied by a crushing paranoia that Ralph is out to sabotage him, so he and his henchwoman, Donna Karan, plot to bring Ralph down first.

You have some real-life experience with Calvin. How did you end up working for him and why was it for such a short period?
When I first moved back to NYC after a few years in Los Angeles, I was looking for a job and knew someone who had a friend at a placement agency for personal assistants.  Long story short, I got a job working for Calvin in his home.  We met twice and he could not have been cooler, but it was a surreal experience when you’re sitting across the table from a man whose name is on your underwear.  I didn’t last long there, because… well… I’m an actor and realized that Calvin needed someone way more dedicated than I was able to be.

What kind of research did you do on Calvin, Donna, and Ralph for this?
Exhaustive research. Mostly on Calvin, which was not easy, because Calvin is not as much of a fan of attention as Ralph and Donna. Luckily, Calvin put out a book last year; mostly of photos, but he included a few stories and testimonials that I found hugely helpful in crafting the script.

Ralph is portrayed by a woman in the show. Why did you decide to go that route?
A few reasons. In my show, Ralph is a man of limitless confidence, which simultaneously annoys and attracts Calvin to him. In real life, Calvin is tall and Ralph is not. I’m only 5’10”, so I wanted to tower over the actor who played Ralph. Miranda Noelle Wilson, a frequent collaborator of mine, has history of playing men in my shows — she played Anderson Cooper in my Andy Cohen musical and I knew she’d make a killer Ralph. 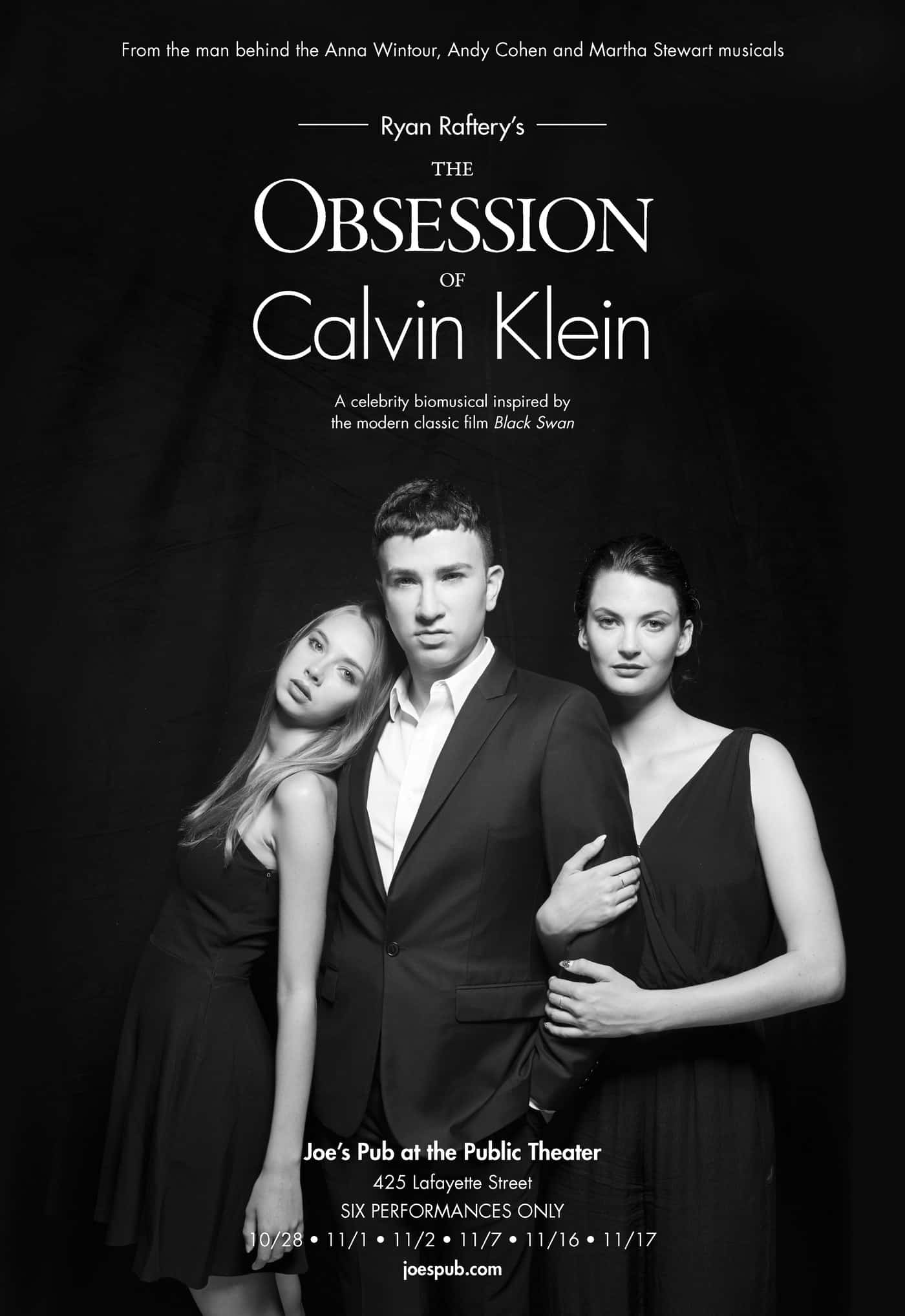 The show is a musical. Can you give us a taste of some of the lyrics or songs in the show?
In an early moment in the show, Calvin has just launched his jeans campaign and is poised to go global and becomes obsessed with the idea that Ralph will try to copy his ideas. He audibly wishes that there were another designer on their level to throw Ralph off of his scent. At that moment, a cleaning lady enters and admires a sketch on his desk, lamenting that she once wanted to be a fashion designer herself. Calvin gets an idea to secretly bankroll her and create the “next great American sportswear designer” as a rouse in his one-sided competition with Ralph Lauren. That cleaning lady’s name is Donna Karan.  The song that ensues is a parody of ABBA’s “Mamma Mia”.  Here’s the second verse:
YOU’LL DRESS ALL THE WORKING GIRLS OUT ON THEIR MORNING COMMUTES
A SEA OF YUPPIES ALL CLAD IN YOUR TIGHT, BLACK BODYSUITS
WE’LL GET YOU A WALL ON HOUSTON AND BROADWAY
THAT’S FIFTY FEET TALL
ANNOUNCING A NEW BRAND HAS ARRIVED, AND WE’LL CALL IT DKNY!

Do you think Calvin will end up coming to see this? Will he like it?
I think I can say without fear of successful contradiction that there is zero chance of Calvin coming to see this show. He famously shies away from attention, which is ironic as he has one of the most famous names in the world. I am a comedian, first and foremost. I’m never out to hurt anyone’s feelings and my show is largely a figment of my imagination. However, anything your average person knows about Calvin is a part of my show — fragrance, underwear, and jeans.

Did Martha, Anna, or Andy come see you perform?
I actually just met Martha Stewart for the first time recently. Her entire staff came to see the show, but she never did. I showed her a picture of me in character and she said, “Not bad.” 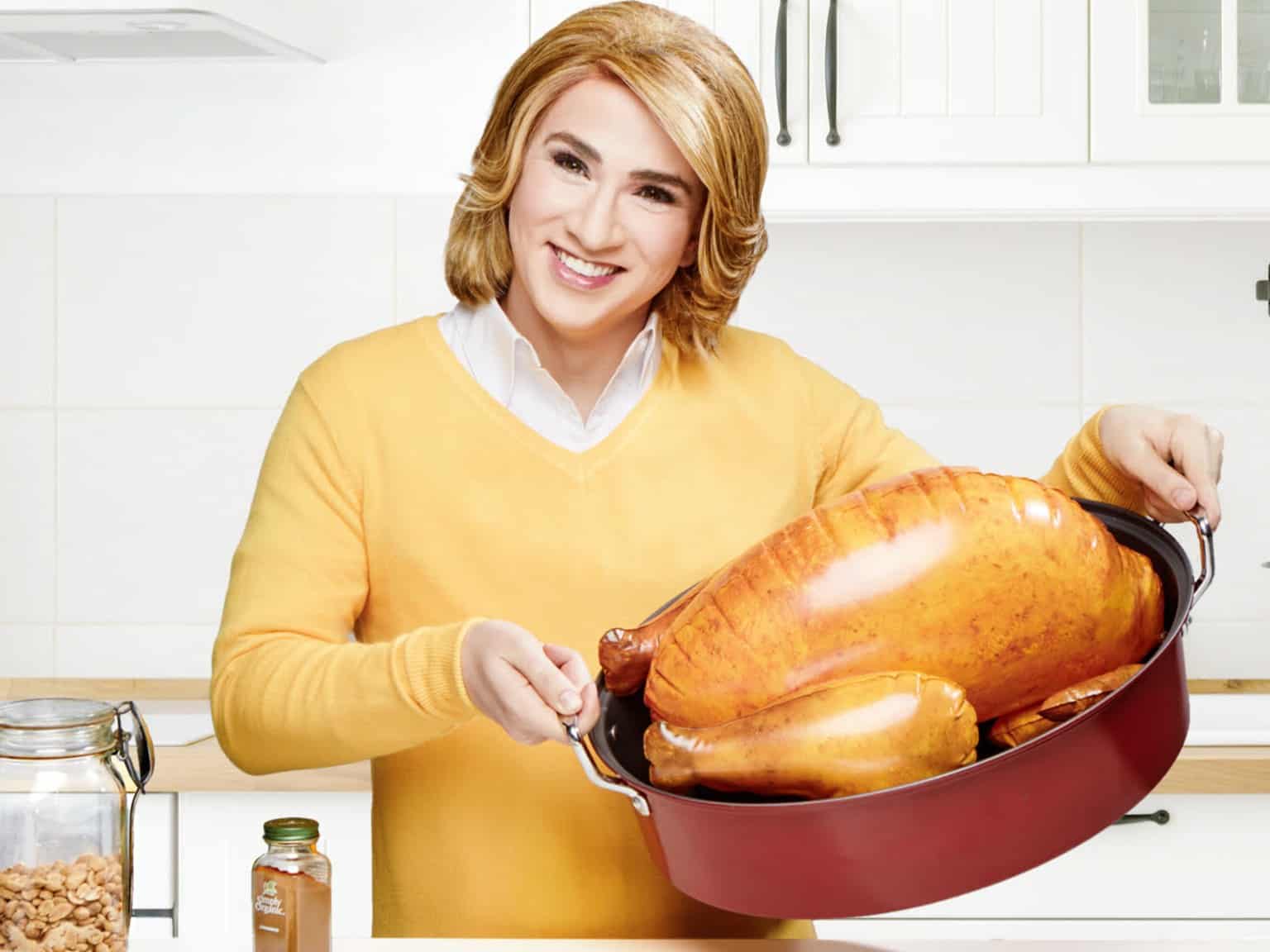 This will be at Joe’s Pub. What’s the plan for the show after this run?
Every show I’ve done before has played Los Angeles, but this show is so New York, I’m not sure it would go over as well. I never say never, though. The Anna Wintour show had the longest life, but Martha played the most cities. Everyone loves Martha. 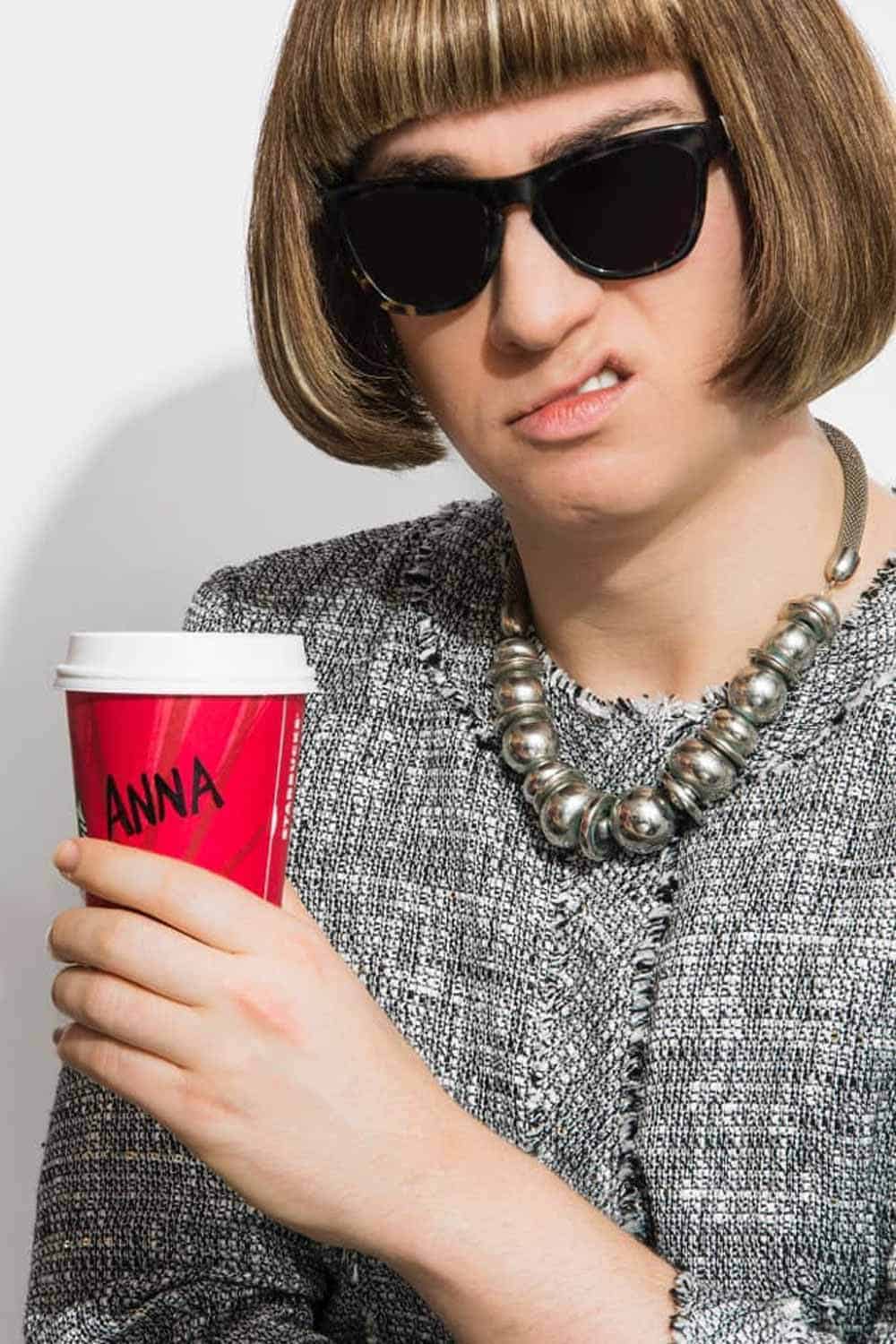 Who else intrigues you in the fashion and media world that you might bring to the stage some day?
Karl Lagerfeld is iconic in every possible way.  His quotes alone are begging for a musical.