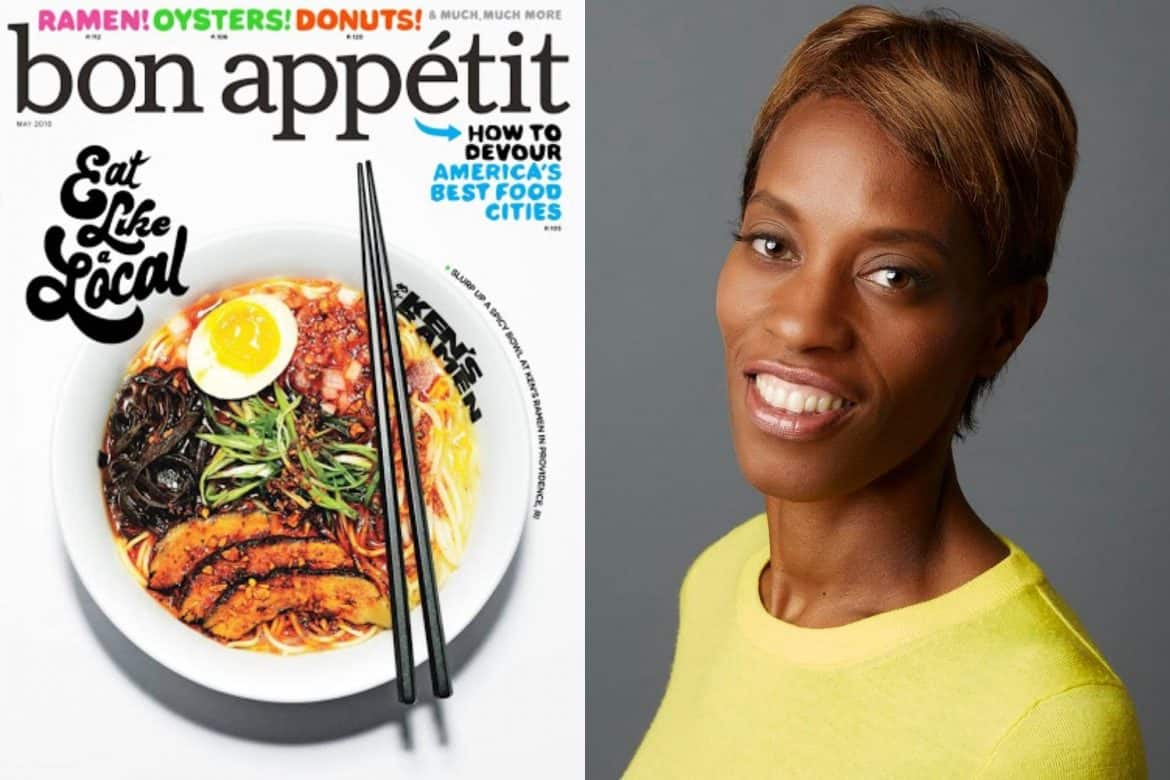 Condé Nast has announced Dawn Davis as their new editor in chief of Bon Appétit, effective November 2nd. Davis will also be responsible for their food brands Epicurious, Healthyish, and Basically across digital, video, OTT, social, and print platforms.

She was most recently vice president and publisher of 37 Ink, an imprint of Simon & Schuster and has two decades of experience in the literary world. For twelve years prior to joining Simon & Schuster, Davis was at HarperCollins, overseeing the Amistad imprint, where she published numerous bestselling authors, including Edward P. Jones, author of the Pulitzer Prize-winning novel, The Known World; Attica Locke, author of Black Water Rising; and Chris Gardner, author of The Pursuit of Happyness. She was named the 2019 Editor of the Year by Poets & Writers. Davis is the author of If You Can Stand the Heat: Tales From Chefs and Restaurateurs, which included profiles of chefs Edna Lewis and Anthony Bourdain. She’s a graduate of Stanford University.

“Like the Bon Appétit brand, I see food at the epicenter of all we do,” Davis said today. “Food is connected to community and culture, economics and family. Decisions about what we eat and with whom, who produces our food and how, influences almost every aspect of our lives,” said Davis. “I look forward to working with both the talented team at Bon Appétit and with writers and tastemakers to create an array of intriguing and inclusive recipes and stories about the intersections between food and family, culture and commerce for our audiences.”

Davis will report to Wintour in her new role.  “Dawn’s work stands out for defining and leading important cultural conversations.” Anna Wintour says. “She is a trusted voice and supporter of a diverse and inclusive community of writers and she has shone a light on people and stories that need to be told. I am so pleased that she will bring her considerable talent to Bon Appétit.”

Bon Appétit recently announced a partnership with world-renowned chef and author Marcus Samuelsson, who will guest edit this year’s holiday issue and act as an ongoing content advisor for the brand. Sonia Chopra began her role as Bon Appétit’s new executive editor earlier this month.

Davis replaces Bon Appétit editor in chief, Adam Rapoport, who resigned in June after a 2004 photo of him and his wife, Simone Shubuck, in brownface resurfaced on Twitter. He received widespread backlash from current and former employees who brought up instances of racial inequality within the brand. Condé Nast vice president of video Matt Druckor also resigned following accusations of racism, homophobia, and pay inequity.

The Gucci Model Challenge on TikTok Will Make You LOL