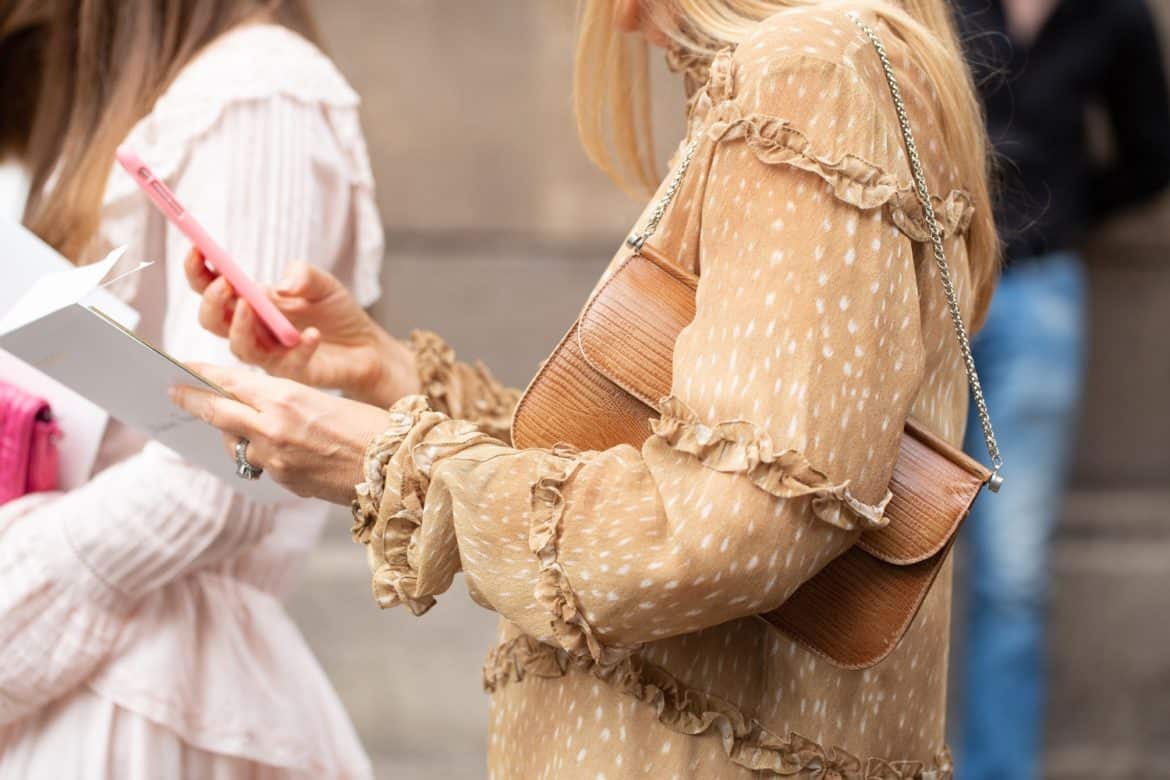 The Daily Front Row‘s perennially chic correspondent Sofia Achaval de Montaigu is soaking up the glamour in Europe. Below, she fills us in on all the highlights and the unforgettable moments that took place in the fashion capital during the Paris Fashion Week Spring Summer ’22 schedule.

At the Grand Palais Éphémère, celebrities like Lily-Rose Depp, Kristen Stewart, and Charlotte Casiraghi gathered for the finale of PFW: Chanel! When entering, guests could see a giant poster of model Vivienne Rogner taking a picture, which was the inspiration for Virginie Viard’s approach this season. As a way to replicate fashion shows from the ’90s, we saw models walk in a festive spirit to the beat of Freedom by George Michael. Besides the classic tweed suits, there were summery mini dresses in striped fabrics, branded underwear, swimsuits, and sports bras, and must-have retro accessories like chain belts, beach bags, pearl earrings, and striking necklaces. 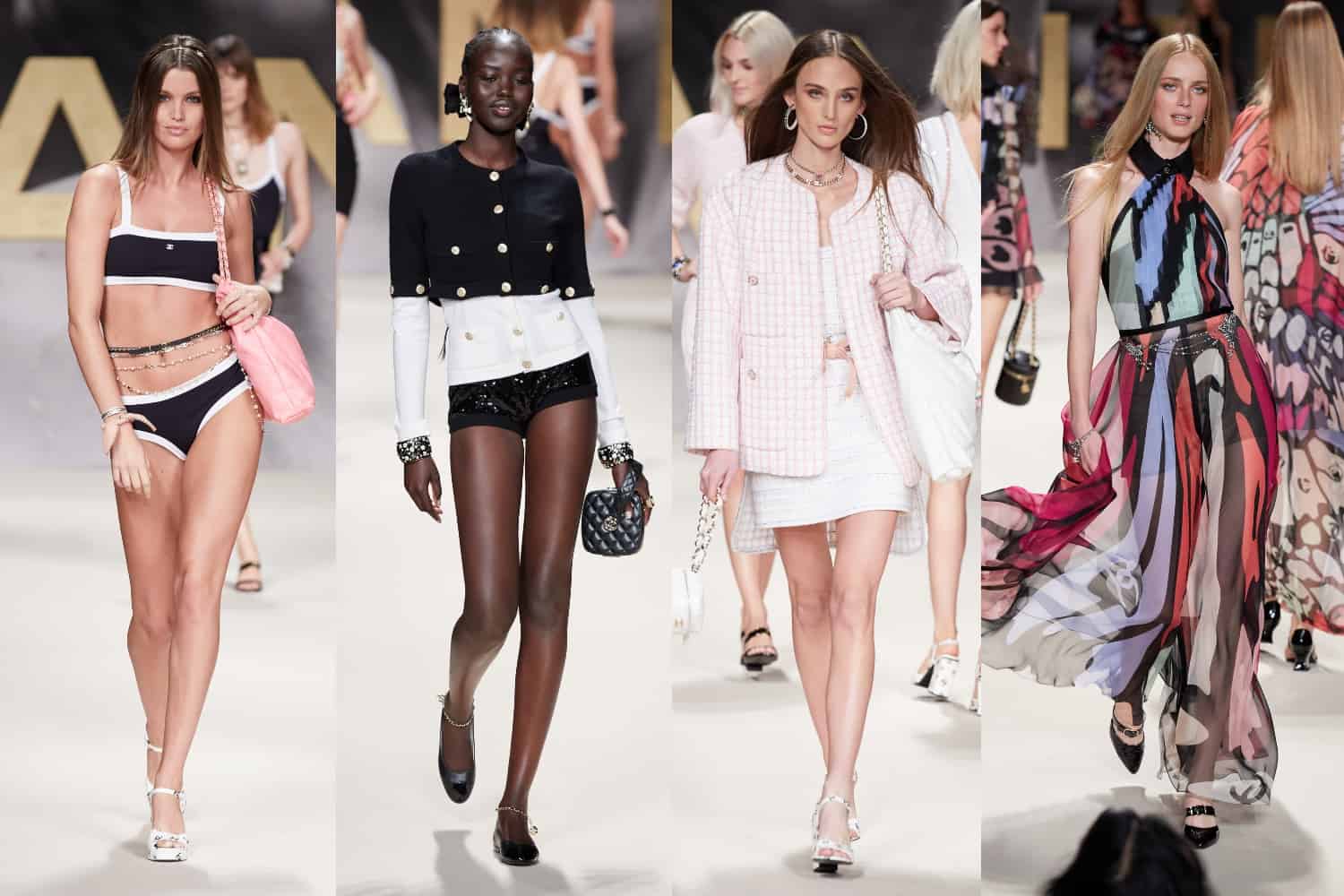 Stella McCartney presented her collection surrounded by celebrities like her father Paul, actress Demi Moore (who wore a net jumpsuit), and Paris Jackson. The event took plate at the Espace Nieymeyer, where a green carpet covered the floor over
which the models walked. The environmentally-conscious message is always present in the designer’s presentation, and on this occasion, it appeared in the form of a mushroom—the main theme of the collection. We could see mushrooms in prints that combined shiny hues with different shades of brown. The eco-leather bags were made out of organic fabrics, and even the soundtrack was created from high-quality mic recordings of mushrooms growing. Dresses with wide skirts and jumpsuits cut tight to the body were made in vibrant and colorful spandex.

Giambattista Valli’s show took place at the Musée D’Art Moderne surrounded by Modigliani’s art pieces. This collection was one of the youngest and most fresh in recent years, with plenty of romantic touches. As such, his pretty fans—Madelyn Cline, Soko, Debby Ryan, and Camila Coelho—sat in the front row nodding in approval. The offering included little jacquard suits, voluminous dresses with frothy ruffles and delicate flower prints in sheer fabrics.

Lanvin presented its Spring Summer “Comic Strip” collection at Salle Pleyel. Staying true to its name, this line included prints inspired by heroes and heroines like Batman and Catwoman, which could be seen in the front of tops, in the back of some jackets, and even in the shoes. The color palette included petrol blue and purple, which made a contrast with the brand’s trademark daisy print, which was a favorite on jumpsuits, biker shorts, and cardigans, with a shirt and coat option for men. As an homage to former creative director Alber Elbaz, the collection displayed the classic draped mini dresses in tulle, which floated as they moved down the runway. Naomi Campbell received rapturous applause as she walked in a suit and an amazing black cape.

Acne Studios presented its collection at a Paris salon with exposed brick walls and big mirrors in the middle of the runway. We saw a handcrafted collection that combined a hyper futuristic style with a vintage one, which referenced embracing the old and creating the new. Floral print blouses were combined with mini skirts with belts and leashes while corsets accentuated the waist over loose and volatile items. Leather clothes also made an appearance in tops, short dresses and jackets, and regarding the color palette, some pastels like pink, baby blue and yellow made their way through neutral colors.

Balmain brought us to La Seine Musicale to celebrate Olivier Rousteing’s 10 years at the brand. The festival-meets-show brought together Franz Ferdinand and Doja Cat to perform, while Beyoncé played her part with a voice over to open the show. The celebrity-heavy model casting included Carla Bruni, Naomi Campbell, Natasha Poly, and Natalia Vodianova who walked to the song “Halo”. The signature armor-style dresses that are typical of Rousteing were featured front and center, but the line also incorporated low-rise jeans, asymmetric dresses with deep necklines, and power shoulder blazers.

The Rochas show took place at the luxurious hotel Mona Bismarck. The brand’s creative director, Charles de Vilmorin, is well known for his illustrations and drawings, which were translated onto his designs for this collection. Taking inspiration from the late ’70s and early ’80s, fabrics like vinyl and lamé brought sparkle, while big ruffles gave dimension to the clothes and shoes. Models walked to the beat of MODE-F while we aring the eclectic and daring collection, while the hair and makeup also stood out thanks to the colorful eyeliner.

Marilyn Melo Redefines What it Means to be a Model