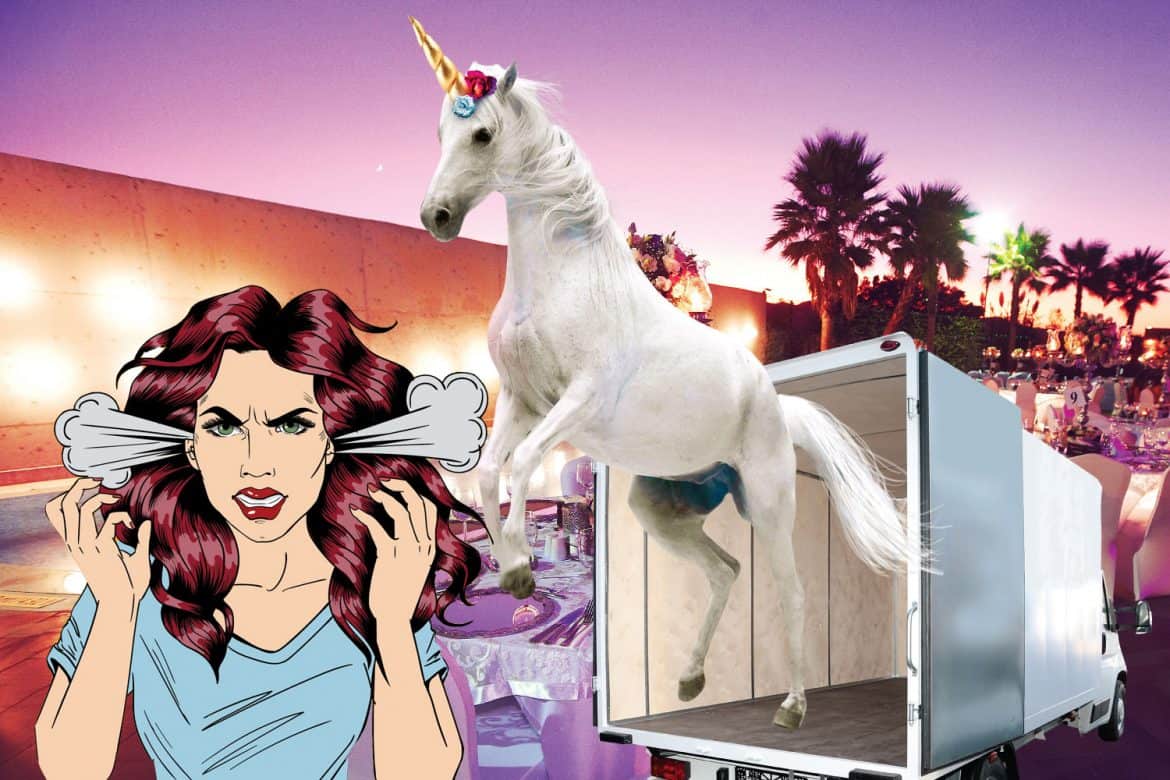 Most of us have no idea about the the behind-the-scenes drama that goes into planning a successful event on the East End. The Daily Summer recently sat down with a somewhat disgruntled event planner to hear about some of her craziest days in the trenches. Prepare to laugh!

Do you like your job?
In the moment, it’s soul-sucking, thankless work. I love my big events six months later, when I can tell my family all about my fabulous life over Christmas dinner. But the actual day-to-day of being on site, sweating, and smiling at people who want outrageous things is taxing.

What would you consider to be an outrageous request?
Oh, everything from spraying WD-40 on a squeaky bathroom door that no one can hear to being asked to source a six-foot-tall custom cake in 12 hours.

Tell us more about this squeaky bathroom door…
I once had to procure WD-40 at a venue that did not have it on hand. The event hostess was miffed to hear a door squeak when she went to the toilet, so I had to find something to make the bathroom door stop squeaking, and do so in a cocktail dress.

Was that humiliating?
It was degrading. You really have to put your dignity aside when it comes to events, because good event planners do whatever it takes. I don’t know if everybody feels this way, but for 20 years, I’ve always laughed at the unexpected things. There’s always something. Once, I locked myself outside of my office at 1 a.m. when I was carrying an Oriental carpet. I was wearing sheer pajamas and no shoes. No cell phones, no keys, nothing.

How did you get back in?
I went to the Thai place next door and begged for a phone, and I called someone with a spare set of keys. But it’s just like, you have to get it done. I call it the “f**kening.” There’s always one thing that comes, and it’s the f**kening. I’ve planned for absolutely everything and it doesn’t matter, there’s always this one outlier that will happen that screws you up and gives you a lot of stress. I literally don’t think there’s anything I can do to avoid that. I’ve just had to learn to have a sense of humor about it.

How do you deal with difficult clients?
You never want to lose your cool. You just have to go on autopilot. I call it robot-mode. It’s where you just smile and stare blankly and say, “Yes, I hear you. Yes, I will take care of that.” If it’s something that legitimately needs to be taken care of, you turn around and just do it. If not, you just go to the other side of the room and pretend to look busy.

Have you ever gotten into a tiff with anybody?
Not during the event — I don’t believe in doing that. I have had clients act deeply immature, talk trash about me… There was this one in particular who kept pulling her staff aside and talking about me, and I could hear everything.

What was she saying?
She was saying that I was “too big for my boots” because I had to make some decisions about table seating that she did not like.

What would you say to her if she confronted you?
I would say, “It’s just dinner, love.”

Let’s stay on the topic of tough clients!
Usually, I’m putting on an event for an artist or a creative. Those people may not have their feet firmly on the ground of reality, and they may come to you with some last-minute things. The interesting thing is that the more high-profile and high-powered they are, the less sense of reality they have. Because they have these teams around them who will say yes and try to make magic happen. When I don’t work for them and I’m also being given something on the spot and have literally 15 minutes to respond, I can’t pull a unicorn out of a U-Haul and have it prancing around the party. It’s a really interesting dynamic to have to tell these people who are living in a world of “yes” that the answer is going to be “no.”

Do you feel like clients are more entitled these days?
I do. Mostly because people want more for less. Now, we have a fun social media component that is rampant at every event. Events used to be private. You did an event, it happened, you controlled the photos that were out on the wire services, and that was the end of it. Now, things are happening in the moment, so that’s another reason you really have to keep your cool, because the last thing you want is a video of the event planner having a meltdown in the background. Trust me, I’ve wanted to! The Internet is a dangerous playground for people, and that makes it infinitely harder. For example, there was an event I did for a client and on some no-name photography site’s 11th page was a photo where the designer felt that her arm looked fat. It ruined the entire event for her. She had coverage on vogue.com, we had beautiful celebrities and models there. It was incredible, but no.

Tell us more about the world of photo approval.
They’re evidence of the crazy narcissism that goes on in our industry. I love it when clients retouch their own photos — sometimes, to the point where the hostess looks unrecognizable. Usually, it’s a size 10 trying to look like a size 0.

Clients are also very particular about the guest lists!
My favorite types of clients are the ones who say that they are best friends with the most famous people in the world. Look, I want a party that is populated with cool notables, too. But let’s return to reality. I’ll never forget a dinner party I threw for someone I knew well. I asked her for a guest list, and instead of giving me a list of her friends — all of whom are cool, legitimate people in fashion — she put down all these hot models like Joan Smalls. “We’re girlfriends!” she said. And when I pressed, she said, “I saw her once at the CFDA event.” Yeah, she’s not coming to your dinner party. You can put Michelle Obama on your guest list, but that doesn’t mean I’m going to be able to get in contact with her.

Is it harder doing events in the Hamptons?
Much harder. There is the glorious schlepping of the product; because New York is a city that is based on messengers and convenient delivery services, you sort of forget how much schlepping has to be done. One summer, I found myself driving around cases of liquor in my backseat and then schlepping cases across the beach in heels, with no one to help me. I was dripping with sweat, and then expected to be the face of the event. There’s just a lot more grunt work that goes into the Hamptons. There’s also horrific traffic. Everything is far away, and you get a good beach day, and no one wants to come to the event. You’re trying to send an Uber, but it’s gonna cost you $3,000, which is basically your take-home for the whole affair.

Any DJ drama?
We had a DJ once who, for a two-hour party, showed up an hour and a half late. His call time was an hour before the event started, too. As I was frantically calling and texting him, he was sending me screenshots of where he was in traffic, which turned out to be totally falsified because he was at his house down the road. His cousin, who actually was stuck in traffic, sent him the photos. Absurd!