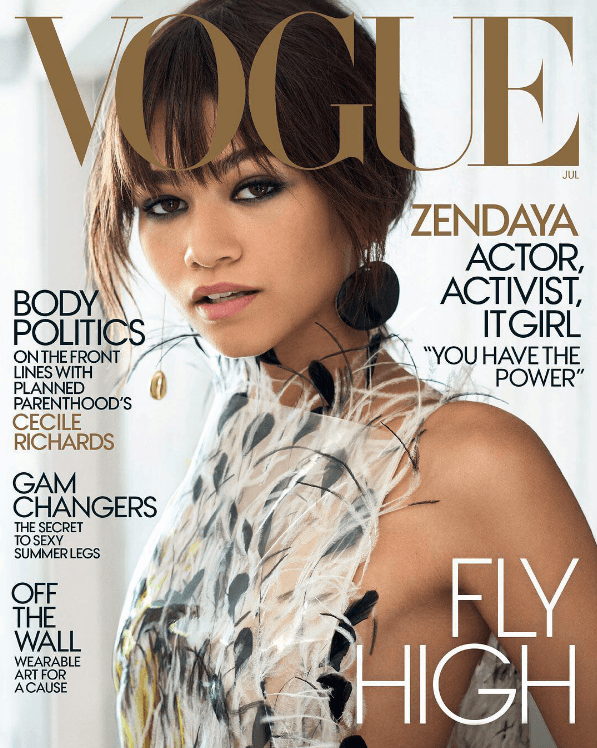 Actor, activist, and “It Girl” Zendaya has landed her first Vogue cover for the book’s July issue, lensed by Mario Testino. “I really don’t have any words right now…I’m grateful, honored and a million other beautiful things that wouldn’t fit in a caption. I’M ON VOGUE Y’ALL!!!!” Zendaya posted on Instagram this morning. The Spider-Man: Homecoming star donned a black-and-white feathered dress on the cover, and in the interview gets chatty about her new role, her first love, reinventing Disney stardom, and more. For this beauty, she has no problem standing up for what she believes in: “A lot of people don’t realize their power,” she told Vogue‘s Abby Aguirre. “I have so many friends who say yes to everything or feel like they can’t stand up for themselves in a situation. No: You have the power.” Zendaya also touches on when Giuliana Rancic commented on her look. (“I feel like she smells like patchouli oil or weed,” the E! host said.) “I went to my room, gathered my thoughts, and wrote something down, which is what two teachers would have wanted me to do,” after she yelled at the TV screen, she said. As for her first love? Singer Trevor Jackson. “It wasn’t a good ending. You know you’re OK in a breakup when your first thought is not, What did I do wrong? It’s, That was the dumbest decision of your life, and you’re going to regret it forever.”

What’s Happening Out East this June?

Tanya Taylor on Life in Barbados