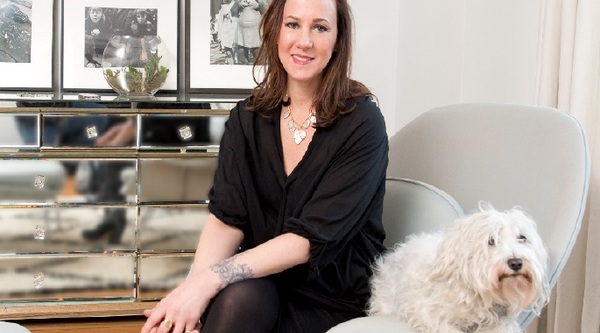 (NEW YORK) Four years after leaving Lucky, magalog pioneer Kim France is working off her couch, playing by her own rules, and dabbling in digital with Girls of A Certain Age. She has no time for your silly glossy games.
BY ALEXANDRA ILYASHOV

You launched Girls of A Certain Age over a year ago. How’s it going?
Great. It’s such a different community than you build working at a magazine. The readers are so grateful to have something. Most sites for women in their 40s are very parent-y, and most fashion bloggers are in their early 20s, so there’s a huge gap. Most of my readers are in their 30s and 40s, but recently a 21-year-old reader tweeted at me, and I met a 60-year-old reader, so there’s a pretty broad reach.

How are commenters treating you?
I’ve had maybe two bitchy comments. I was surprised, because people certainly had their knives out for me when I was the editor at Lucky. I expected those people to poke around, just to see my blog. Most of the people stayed away and refrained from being nasty.

Has the site developed the way you’d hoped at its inception?
One of the gifts I gave myself after I left Lucky was the gift of not having a lot of expectations of what would come next…maybe to a fault. I wanted to have advertisers, and I have Federated [Department Stores] backing me. But I want more readers, which is part of the reason I’m writing for Racked to raise visibility.

How’d that column come about?
I asked, and they said yes. I’m also doing something for Refinery29 and Babble. It is all stuff to get Girls of A Certain Age out there.

Do you still keep up with print?
I pay so little attention to print these days, to be honest. Once I wasn’t in that world anymore, I drifted away.

How’d you get involved with Lucky?
While I had a contract [as editor-at-large] at Spin, I talked to James Truman at a party. I thought he was very smart and interesting, but didn’t think anything of it. Then, Condé Nast HR called—James wanted to talk about a magazine he was interested in doing. I never really imagined myself working there. I didn’t think I was a Condé Nast type of person.

Why not?
I’m the kind of girl that picks clothes off the floor and if they smell clean, I’ll wear them the next day. I don’t get regular manicures. I just wasn’t polished. At the time, Condé Nast had the reputation to be the most polished and manicured. I was a little too downtown, in a grubby way.

How did you win over the Condé cronies, sans polish?
James and I talked. He asked which magazines I thought did shopping well. I told him I love Japanese fashion magazines. He did, too, and pointed to a huge pile on his desk. We had a great talk, but I thought nothing would come of it.

What was the next step in Lucky’s inception?
A week later, James had me come again, and Si Newhouse sat in. I was nervous, but Si was just this little man in a sweatshirt who seemed so much less scary than you think he’d be. Once you work with him, he becomes scary again. But he was always very wonderful to me.

How’d the mag come to fruition?
They wanted me to do prototype pages, so I hired Andrea Linett from Bazaar and a small crew. We got approval to do the test issue, and then to do the magazine.

How did it feel to be greenlit?
Up until I got it, I wasn’t sure if I was going to be freelancing or in a corner office in Times Square. Then it happened, and I got the corner office. People at Condé Nast didn’t like the name Lucky, and didn’t think it’d be a success. I wasn’t a fashion person—a lot of people didn’t like the idea of me.

Why the chilly industry reception?
The fashion world was very snobby towards Lucky at first. Nobody would lend us clothes; we had a tough time getting models. Once readers started freaking out over it, advertisers had to pay serious attention. When we reached 1 million in circulation, I felt like it was going somewhere.

How’d your time there wind down?
The last day was obviously sad. But I also knew it was time.

Do you like it under Eva Chen?
I’ve looked at it a few times, but never close enough to issue an opinion. That’s by design. I think every editor deserves their predecessor’s silence.

Any thoughts on the fuss over that Kerry Washington cover?
As someone who always got hell over covers, I’m not going to add to it.

What do you think it’s like to edit Lucky under Anna?
It would’ve been challenging for me, because we conceived Lucky as the anti-Vogue.

Despite the rocky adieu, is Lucky your proudest achievement?
I’m very proud of Sassy. That’s what I’ll be remembered for, much more than Lucky. People who know me for Lucky are mainly industry people, but Sassy readers are true-blue.

Post-Lucky, you’ve freelanced for a few titles. How does that compare to being an editor?
I’m very bossy about my text—I write for editors who I know will be respectful.

What do you still read in print?
I have piles of The New Yorker, New York, and British Vogue. I occasionally pick up InStyle. Mostly, though, American fashion magazines don’t really hold much appeal to me anymore. I was in the sausage factory for too long.

Do you ever miss working in print?
I loved print. But I don’t miss the meetings I had during those last few years about alternate revenue streams. It felt like they were throwing spaghetti at the wall.

Do you like working from home?
I love it, but I miss collaborating. Sometimes I go to a café to write, because I want to see other people. I joke with my friend that I’m dying to work in an office full of people. She always says to be careful what you wish for.