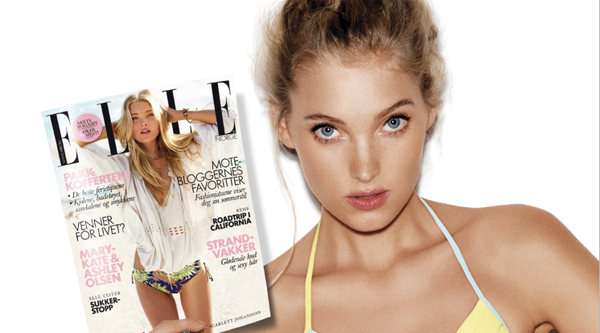 (NEW YORK) We’ve fallen for Swedish glamazon Elsa Hosk (you may know her from her Victoria’s Secret PINK campaign.) She’s got the magic formula of looks and grace under fire, even when she wipes out in front of John Galliano.
BY EDDIE ROCHE

How’s this dreadful winter weather treating you?
I love it! I’m from Sweden so I feel more alive [in the winter]. I think I’m the only model who doesn’t like going to warm places. It’s always too hot, but when it’s cold, I love it. I don’t think my body is made for the beach. It’s not my vibe.

How do you stay warm?
I’m an expert at buying fur coats. I have maybe 10!

We don’t want PETA on your tail so we’ll assume they’re all fake. Did you watch the Super Bowl?
I actually went. It was crazy. I never expected something like that. I felt like I was converted into an American for the day. We ate a lot of cheese fries, Snickers, and hot chocolate, which is part of the experience.

What did you think of Bruno Mars?
He was at the Victoria’s Secret show in 2012 and has such a beautiful voice live. I also love the Red Hot Chili Peppers. They killed it. The guys look pretty sick at their age. They’re not so young anymore, but they had so much energy on stage.

We understand you almost became a basketball player…
I started playing basketball when I was 10 and all the girls in my class did it. It was one of those things where we did it whether we liked it or not in high school. I’m an all or nothing person, so I made my dad put up a basketball net and I’d practice every day after school.

How did the modeling thing come about?
My dad sent photos to some agencies in Sweden. I didn’t even know, but he told me when they contacted him back. I was 13 when I started and now I’m 25. I’ve been with IMG for almost my entire career. Lisa Benson is my manager there and she’s the best!

What were the early days like for you?
I was in Paris, and someone said I was going to meet this guy John Galliano. I had no idea who he was. The casting was so crazy. There were a few other girls and they put numbers on our chest. We were like animals. I started walking and I fell flat on my face because I was so nervous. I ran out of the room and called my agency, and said I couldn’t do it anymore. Ten minutes later they called me to tell me I got the show. I thought, ‘This is fashion? Fashion is crazy!’

One show you’re still walking in is Victoria’s Secret.
That’s a pretty awesome one to be in. I usually hang out with the girls that I shoot with like Sara Sampaio and Jessica Hart.

Have you had any odd encounters with journalists backstage?
One person asked me if I would take a bite out of a Dorito taco thing and they had a mic in my face. I didn’t eat it. A lot of people ask if they have a chance dating one of us. I don’t know how to answer that. I don’t know you!

What’s your 10-year plan?
I love interior design. I’ve also started taking acting classes, not to sound like too much of a cliché. I’m having fun doing that. We’ll see!