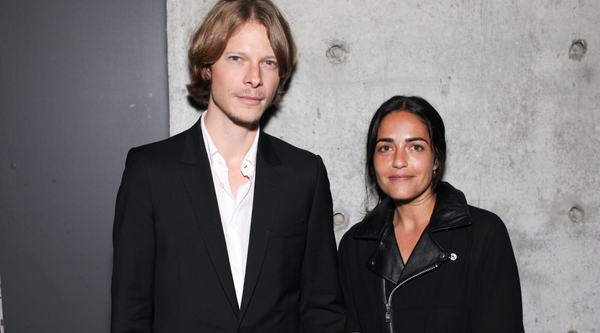 In 2012, film producer Stephanie Danan and model-turned-screenwriter Justin Kern created the perfect merger of Hollywood and fashion. Each collection of their deliciously wearable ready-to-wear line Co. is introduced with a celebrity-infused short film.

How does working in fashion compare to Hollywood?
Where a film project can linger in development for years and never see the light of day, fashion feels very immediate by comparison. Every few months you have a new product to release into the world, which was a nice change of pace for us.

What’s the brand’s celeb element?
Because our branding is based on film and digital content, it’s allowed us to work with some amazing talent, from Marisa Tomei and Aubrey Plaza, to artists you wouldn’t typically expect to find in a fashion context, such as Daft Punk’s Thomas Bangalter and comedian David Wain. As designers, we’re much more interested in these kind of creative collaborations rather than celebrity exposure for celebrity exposure’s sake.

What are your favorite L.A. stores?
Just One Eye, Savannah, and Mameg.

Lastly, a fun fact, please!
The name “Co” actually comes from the half-joking claims of “co-producer” credit we would demand anytime one of us helped the other with an idea when we were working in film. It was an inside joke that just stuck.

How ThreeASFOUR Goes Tech for Spring

Toasting The Premiere Of ‘The Rewrite’ With...

DvF's Journey of a Dress