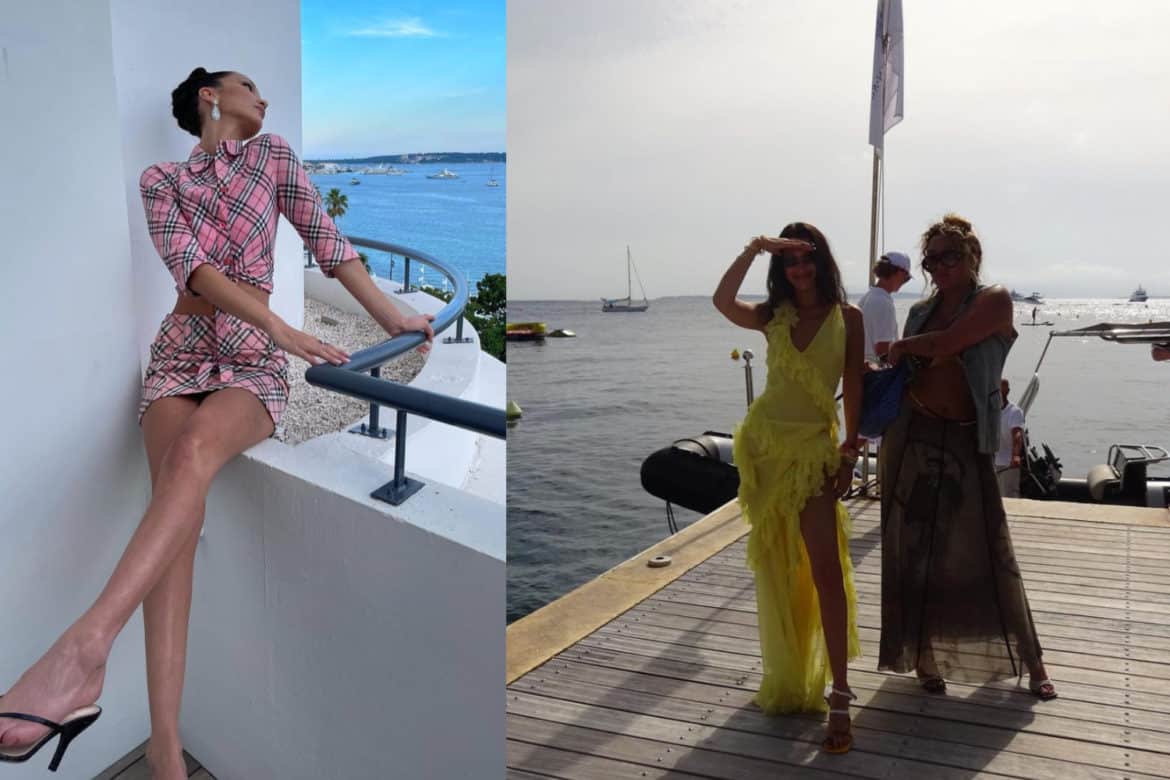 ’Twas an eventful trip to France for our beloved Bella! Beginning with her red carpet debut in a vintage Jean Paul Gaultier number, bejeweled in Chopard (not to mention the ensuing gilded Schiaparelli lungs) and ending the trip with a boyfriend tease while dressed in a coordinating Burberry set, the model made her French sabbatical one for the fashion books.

Lucky for you, we’ve served up a free lesson of French fashion 101, with a roundup of her day-by-day look itinerary. Read on for the très chic moments!

To kick off her jam-packed week, as well as her first Cannes red carpet appearance in two years, the model wowed paparazzi and viewers alike with a black and white vintage Jean Paul Gaultier moment. Leading the way with a sheer train and, of course, properly glitzed out in Swiss jewels (a 5.45 carat marquise-cut diamond, to be exact) Hadid’s return to the red carpet was as major as we could have hoped.

Continuing on with the pre-loved theme, Hadid took to her Hotel du Cap-Eden-Roc balcony to document a vintage Burberry look: a coordinating pink plaid set, which she styled with pear-shaped Chopard earrings and simple black heels. Clearly she was a fan of the look, as she even pulled new boo Marc Kalman into the photo to make things Instagram-official. Mwah!

For her private flight from the French Riviera to Paris—as one so casually does—Hadid sported another coordinating set. Opting for Jean Paul Gaultier once again, the black and gold long-sleeved set was paired with a Fendi tote, a leopard-printed headband, and a pair of lug-sole Mary Janes by Proenza Schouler.

Something sparkly and Swiss!

Following suit with the rest of her accessorizing tendencies for the week, the Chopard ambassador consulted her Swiss jeweler friends to spruce up her fanciful dinner look. In addition to her emerald and diamond-embellished earrings, Hadid had gemstones (and big ones, too!) bedecking her hands. As for the garb, a two-toned mini marabou dress from Lanvin and hardware-adorned Manolo Blahniks were drawing eyes. Talk about G-L-A-M.

For the Dior x Vogue Paris dinner, hosted at Loulou restaurant, Hadid drew eyes with a simple corset and trouser combo. Donning an all-white Dior Men’s look, the Dior Makeup ambassador accessorized with (you guessed it!) Chopard diamonds and left her hair in a French twist—how apropos!

In preparation for a glamorous night ahead—another red carpet debut—Hadid took the more conventional route with her wardrobe choices: a pair of jeans matched with a vintage Dolce and Gabbana top. As far as accessories go, Hadid gave Chopard the day off, and instead opted for large hoops and a Goyard tote.

Oh, you thought she was finished after one go of the Cannes carpet? For her second film festival appearance, Hadid stunned in a monochrome, low-cut Schiaparelli maxi. But the dress wasn’t what prompted camera flashes; instead, all eyes were on the gilded lungs hanging gracefully on her chest. She paired the look with none other than Chopard rubies and diamonds. Did you expect anything less?

When she wasn’t closing out red carpets and attending star-studded dinners, Hadid was busy romancing the day away with her new beau, chilling yacht-side, and jet skiing with friends. Even off-duty, though, her style still has something to say. Spotted in a flared, tie-dyed jeans and a ’90s-era Jean Paul Gaultier sarong, she’s made us rethink our boating outfits going forward…

As for other, what might as well be dubbed, fashionable yacht moments, Hadid opted for a colorful vintage John Galliano coverup that boasts flared sleeves, a kaleidoscope of pinks, and the designers name printed in gothic type. Easy, breezy, beautiful Bella!

Last but not least…

Alas! Hadid signed off from her Cannes getaway in an all-yellow, slit-adorned, silk-chiffon maxi—bedecked with ruffles in all of the right places. Completing the look, you ask? Strappy heels and a kiss! Au revoir!