10 Supermodels You Forgot Were in the “Got Milk?” Campaign 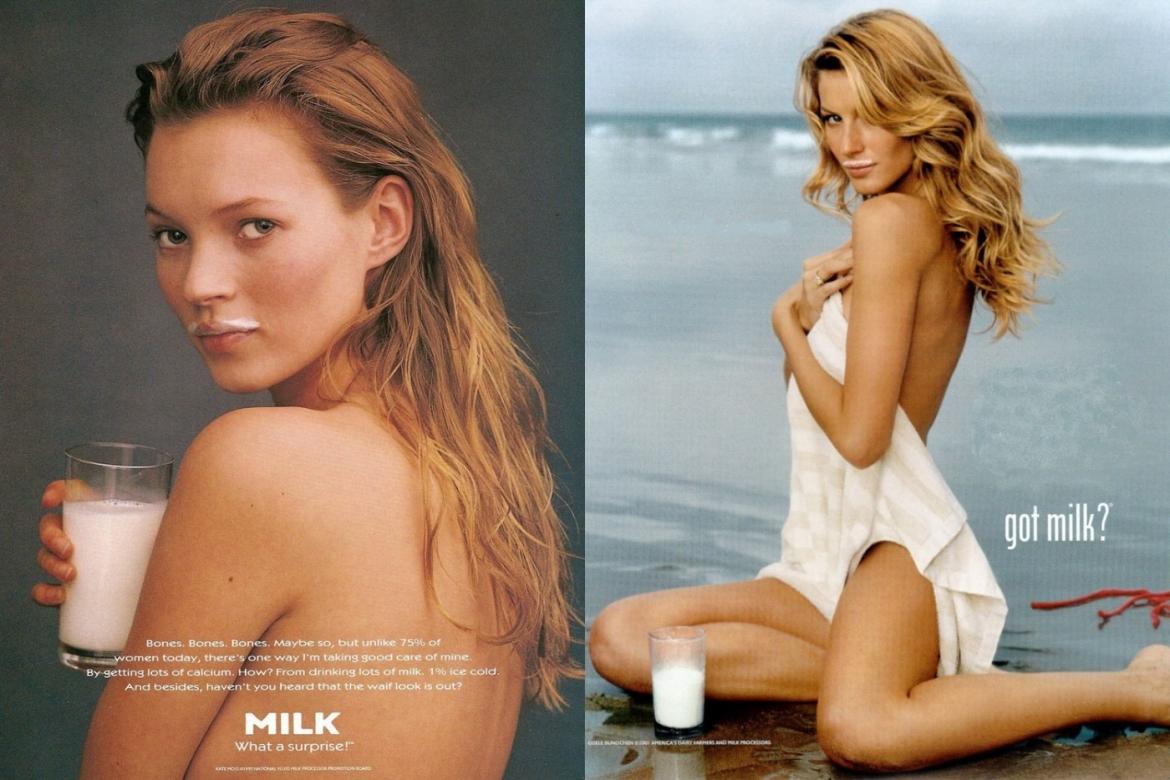 You remember those “got milk?” ads. Of course you do. They were huge in the mid ’90s. They ran for way longer than they should have, so in the end the whole concept sort of went sour — like a carton left too long in the fridge — but before that happened, they were everywhere and everything and literally everyone who was anyone was in them — from athletes to movie stars to, of course, supermodels.

1. Naomi Campbell
Campbell was one of the OG milk-mustache models, which feels both so wrong and so very, very right. The year was 1995. The whole “got milk?” concept had been around for a couple of years already, but it wasn’t until ’95 that the milk mustache print campaign kicked off. Lord only knows how much money they had to pay her to do this shit, but you better believe Ms. Campbell did not come cheap. There is no way she made less than six figures for this shoot. She probably gave the photographer five clicks of the camera to get it right and then just walked off set and into her limo. That’s why her hand’s are behind her back. She’s counting those flashes out on her fingers. Savage, Naomi. Savage! 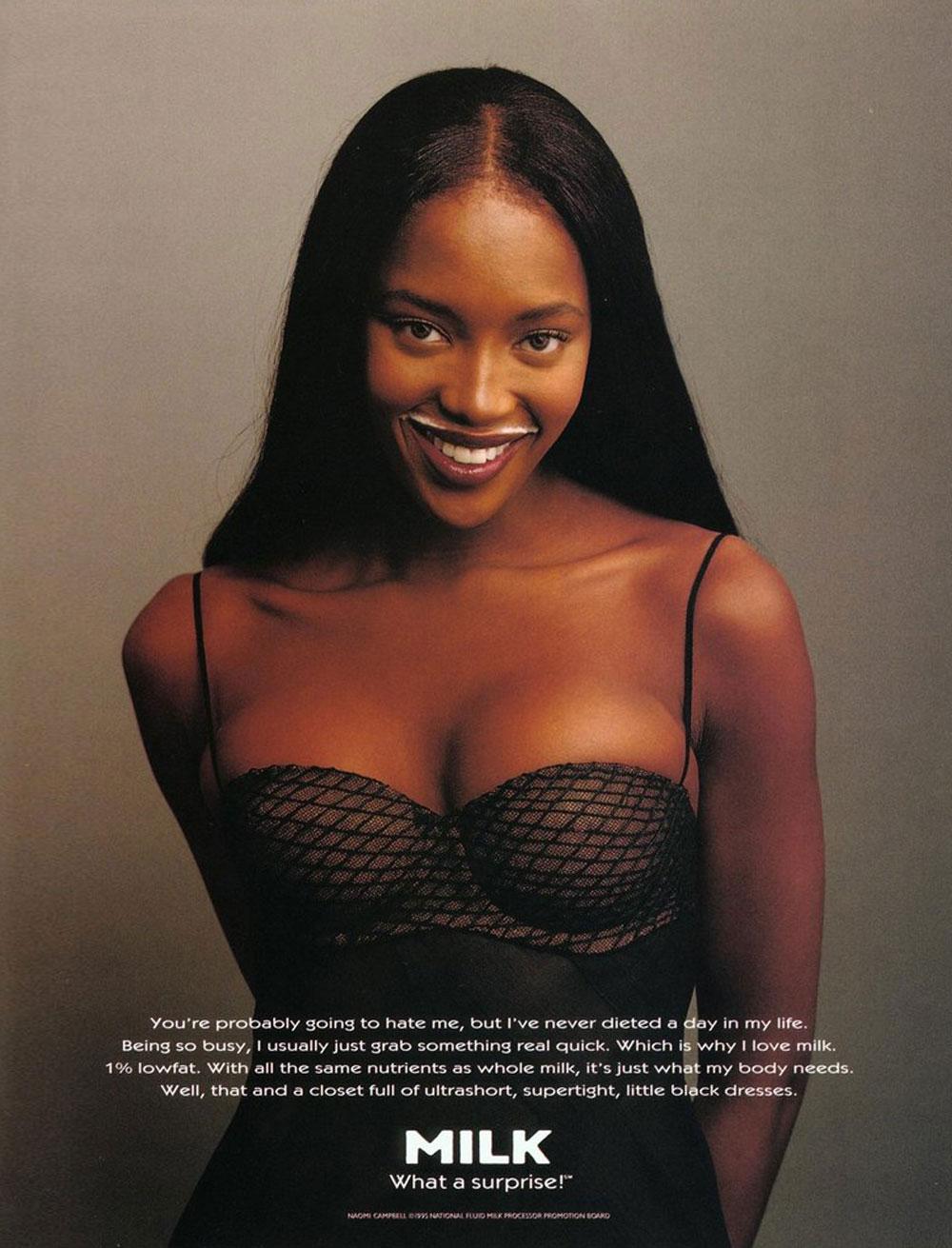 2. Iman
Mother! Yes, Iman too appeared 1995’s “got milk?” campaign. Between her and Campbell, the people at Goodby Silverstein & Partners — the ad agency that created the campaign — were clearly looking to connect with a sophisticated, high-fashion crowd, and were willing to pull out all the stops to do it. 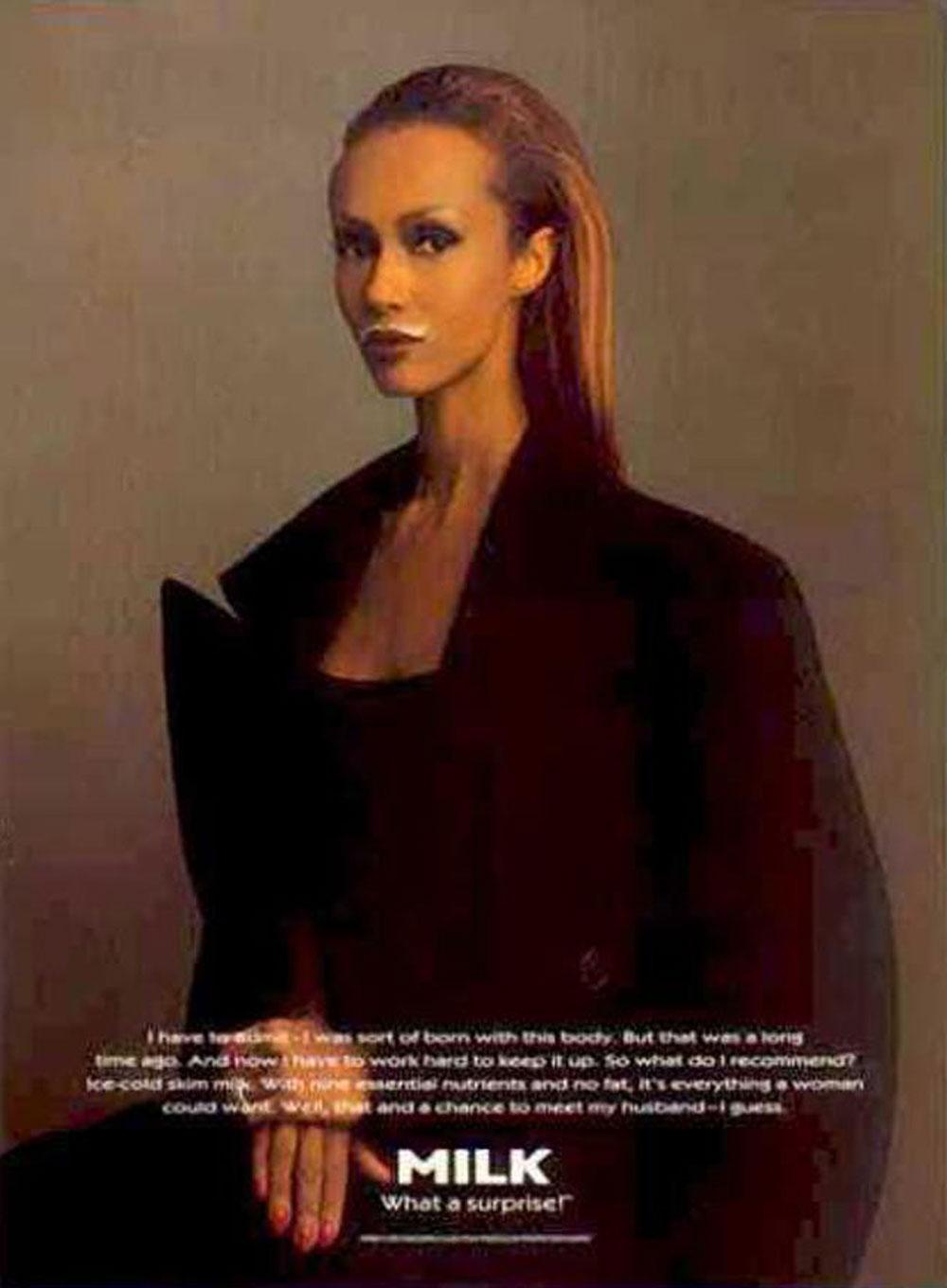 3. Christie Brinkley
Brinkley also did the 1995 campaign, but, let’s be honest, it’s all about Naomi and Iman. 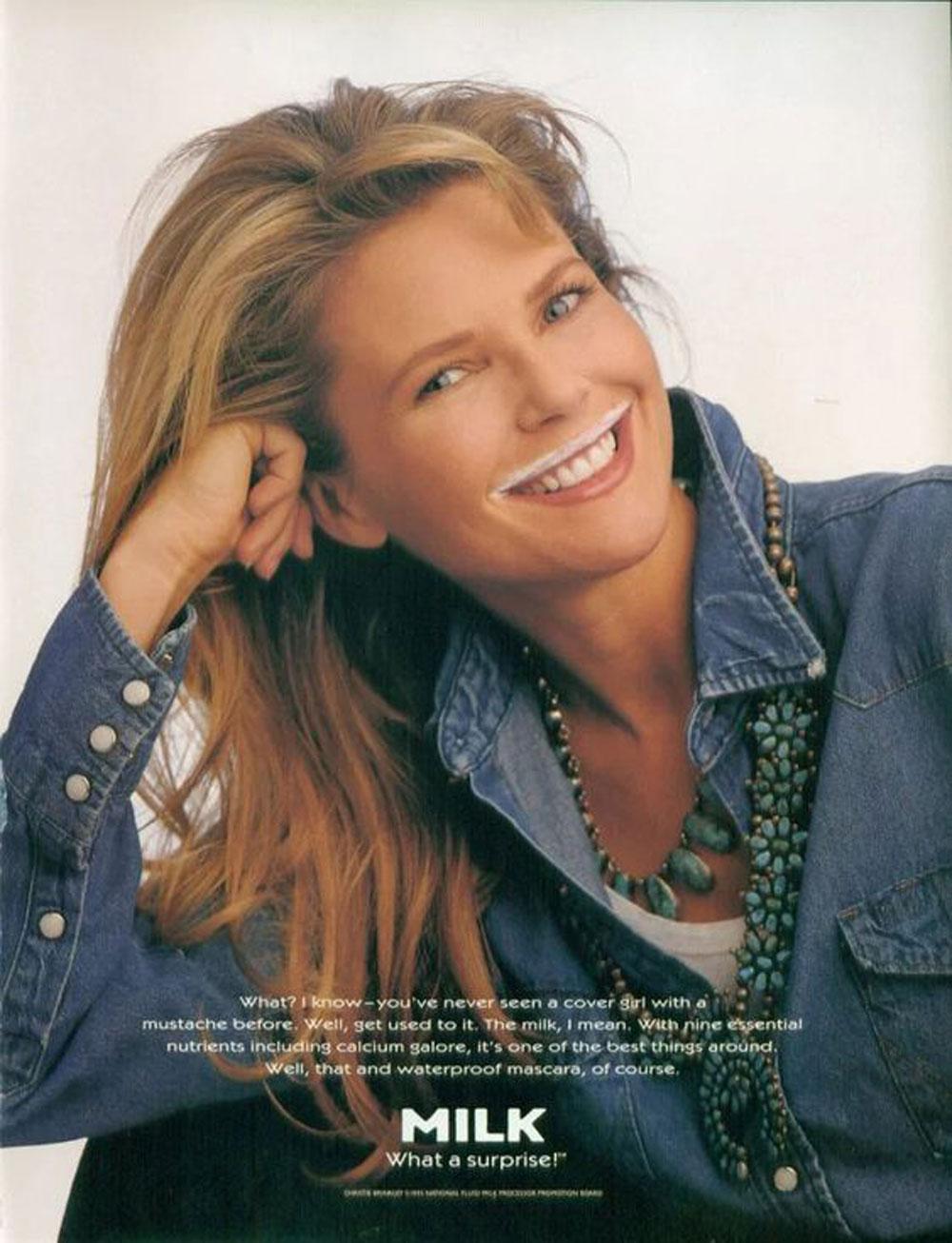 4. Kate Moss
In what was quite possibly the single greatest get of the entire campaign, “got milk?” somehow managed to cast Kate Moss in 1996. Honestly, she probably did it because Campbell did it the year before. I mean, she did it because they paid her buckets of cash, but Campbell made it cool and the two of them have always been such good friends, with Campbell sort of taking Moss under her wing during her early days the modeling business. Supermodel solidarity. That sort of thing. 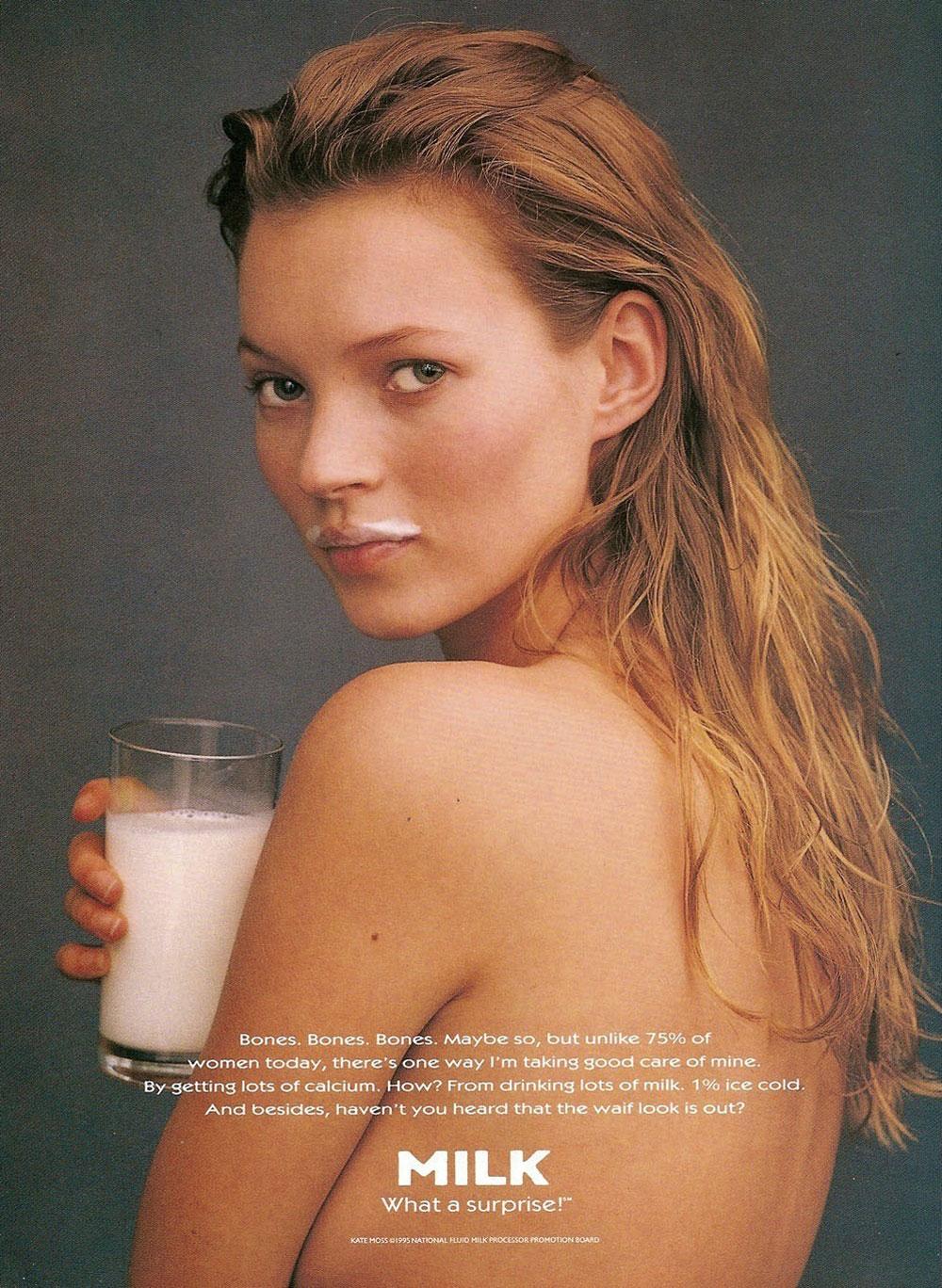 5. Elle MacPherson
MacPherson did the campaign in 1998 when she was pregnant with her first son, Arpad Flynn Alexander Busson. He’s 20 now. 20! Do you feel old yet? 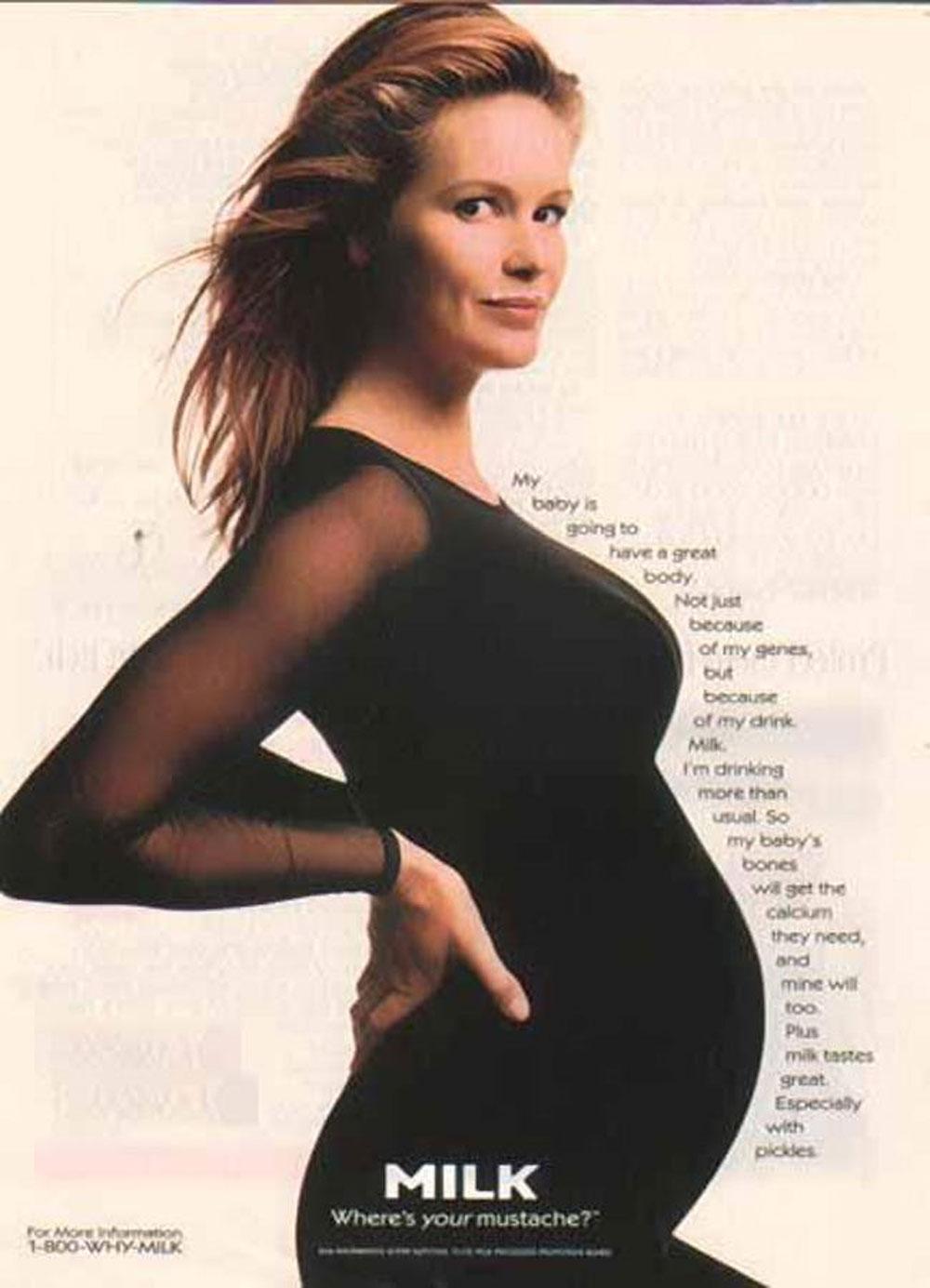 From this point on, things run out of order because, to be perfectly honest, I just couldn’t be bothered to keep looking up the years these campaigns were running. Research is exhausting and this is supposed to be a fun post about milk mustaches and the models who wore them. If you’re really jonesing for dates, do some digging around on Google and drop your new-found knowledge in the comments.

6. Gisele Bundchen
So nice, they booked her twice. That said, don’t you love how they didn’t even bother with all that extra text the second time? They were like, We’ve got a picture of Gisele naked on a beach with a milk mustache. That’s enough. 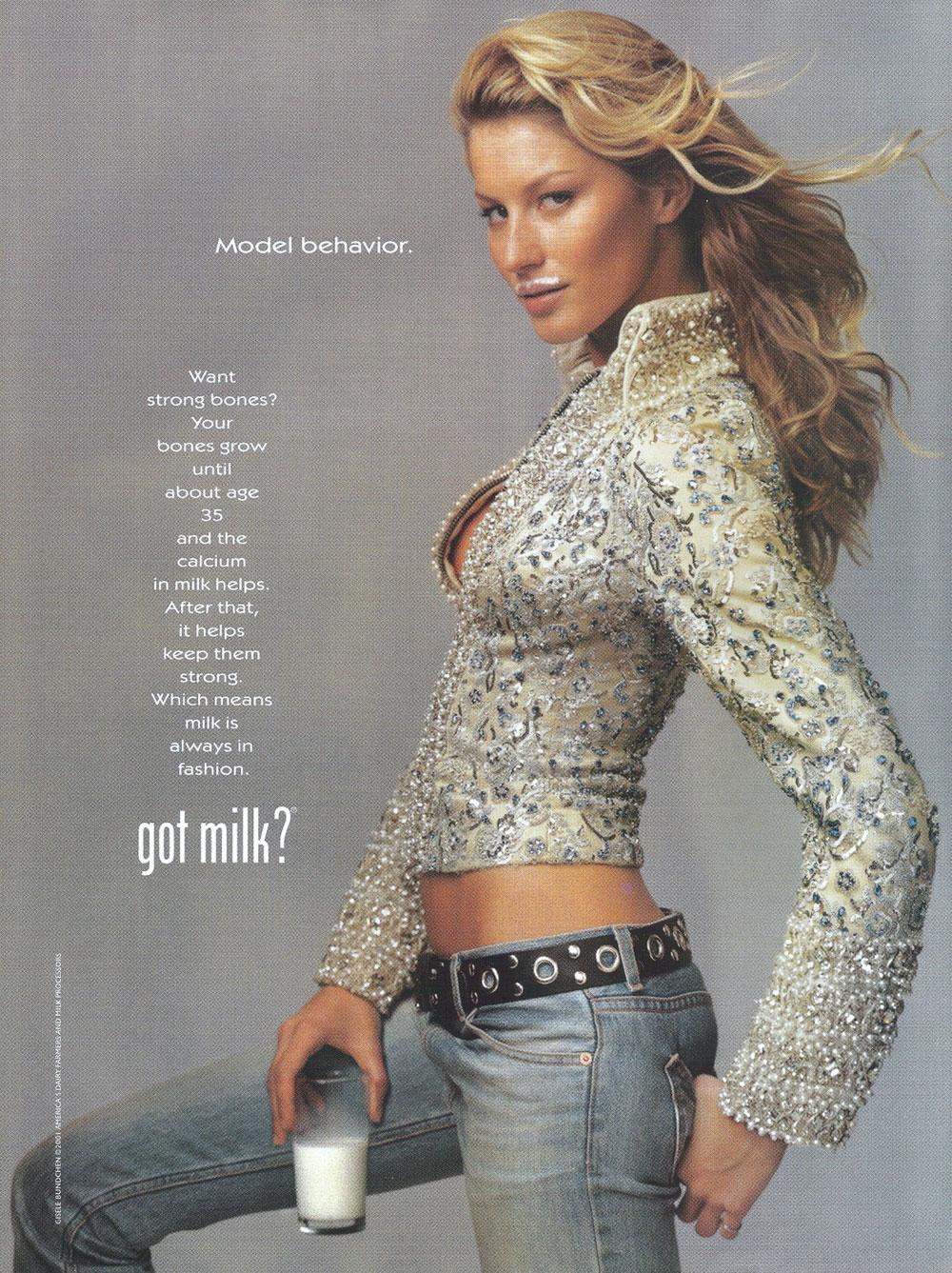 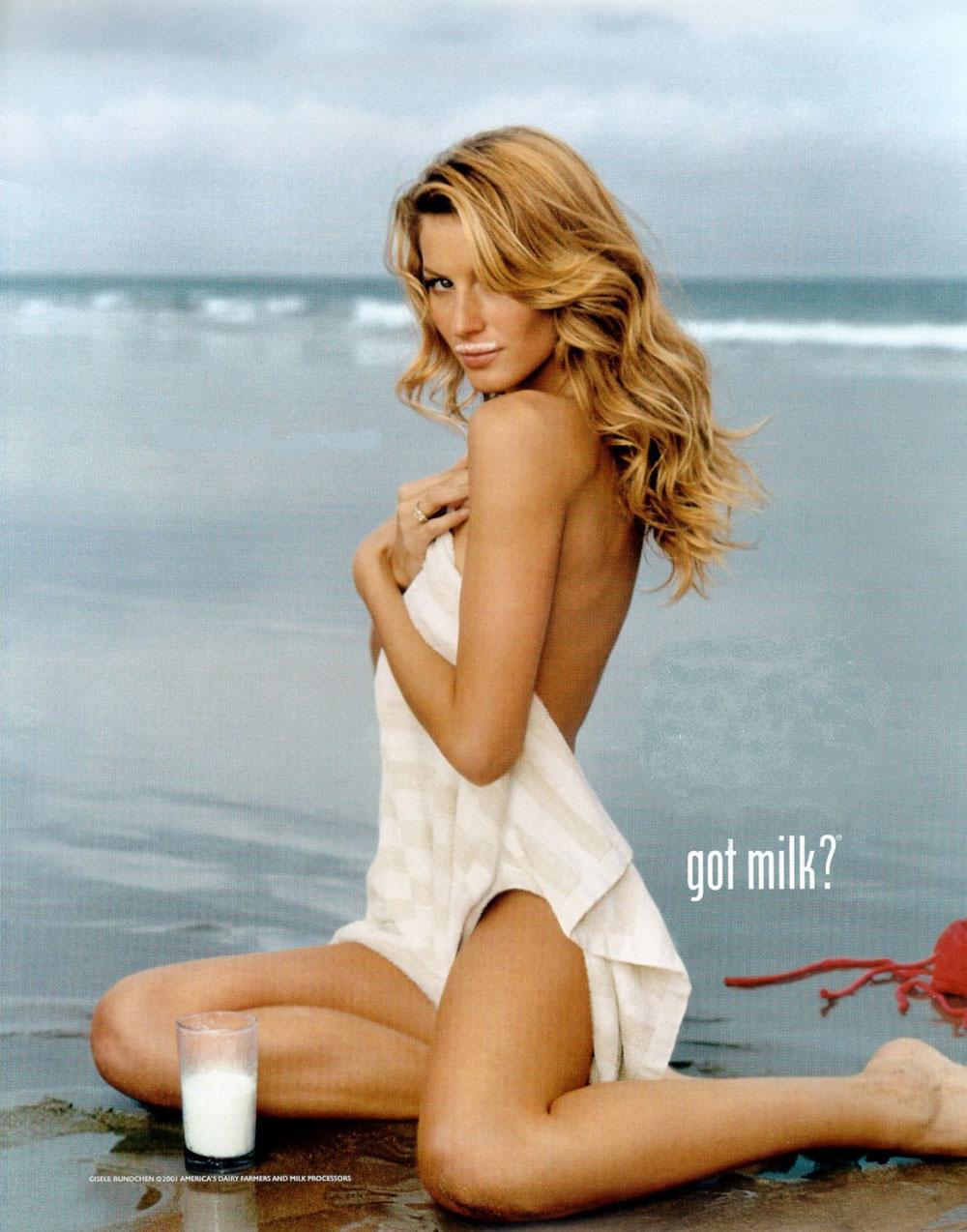 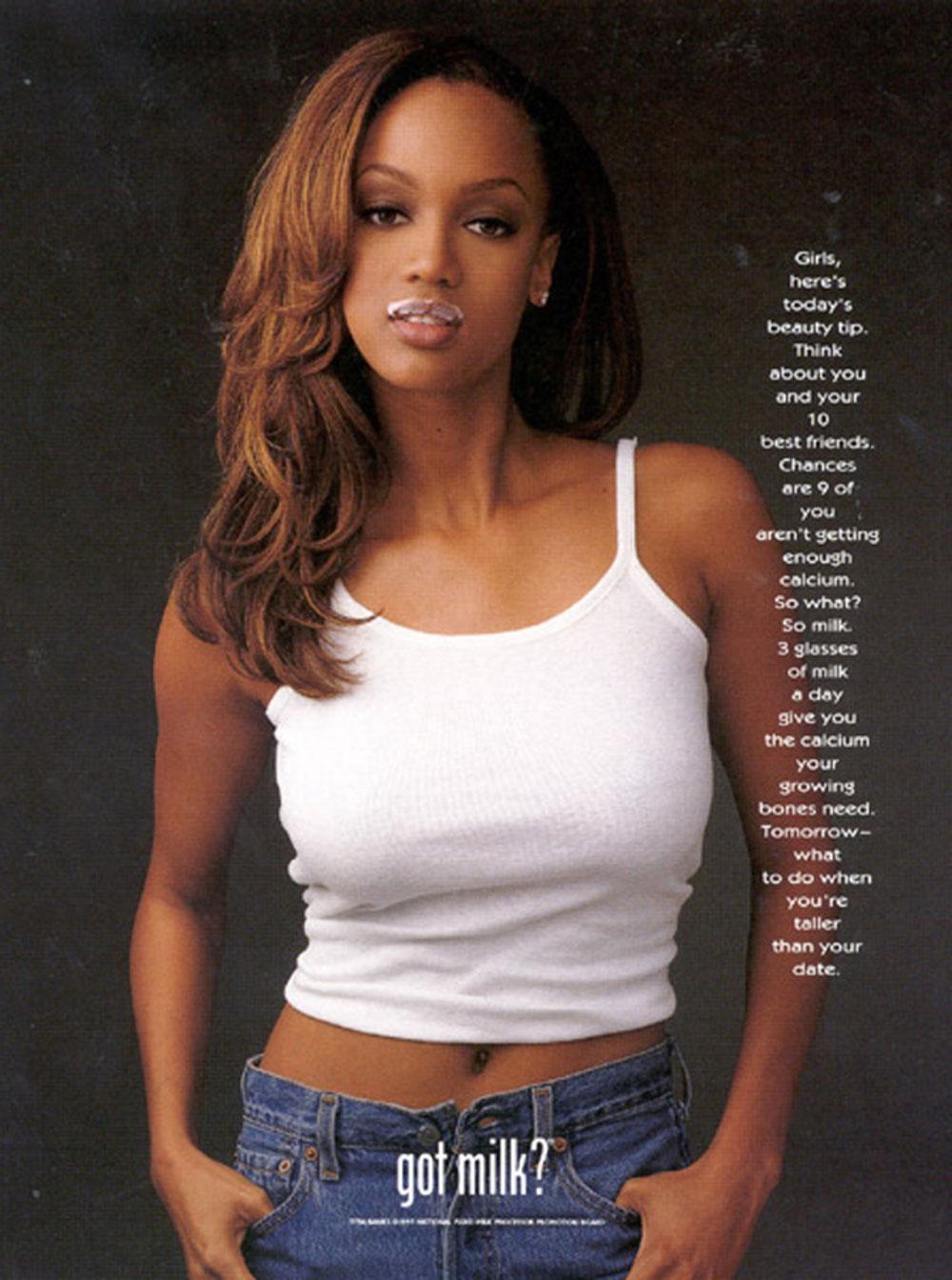 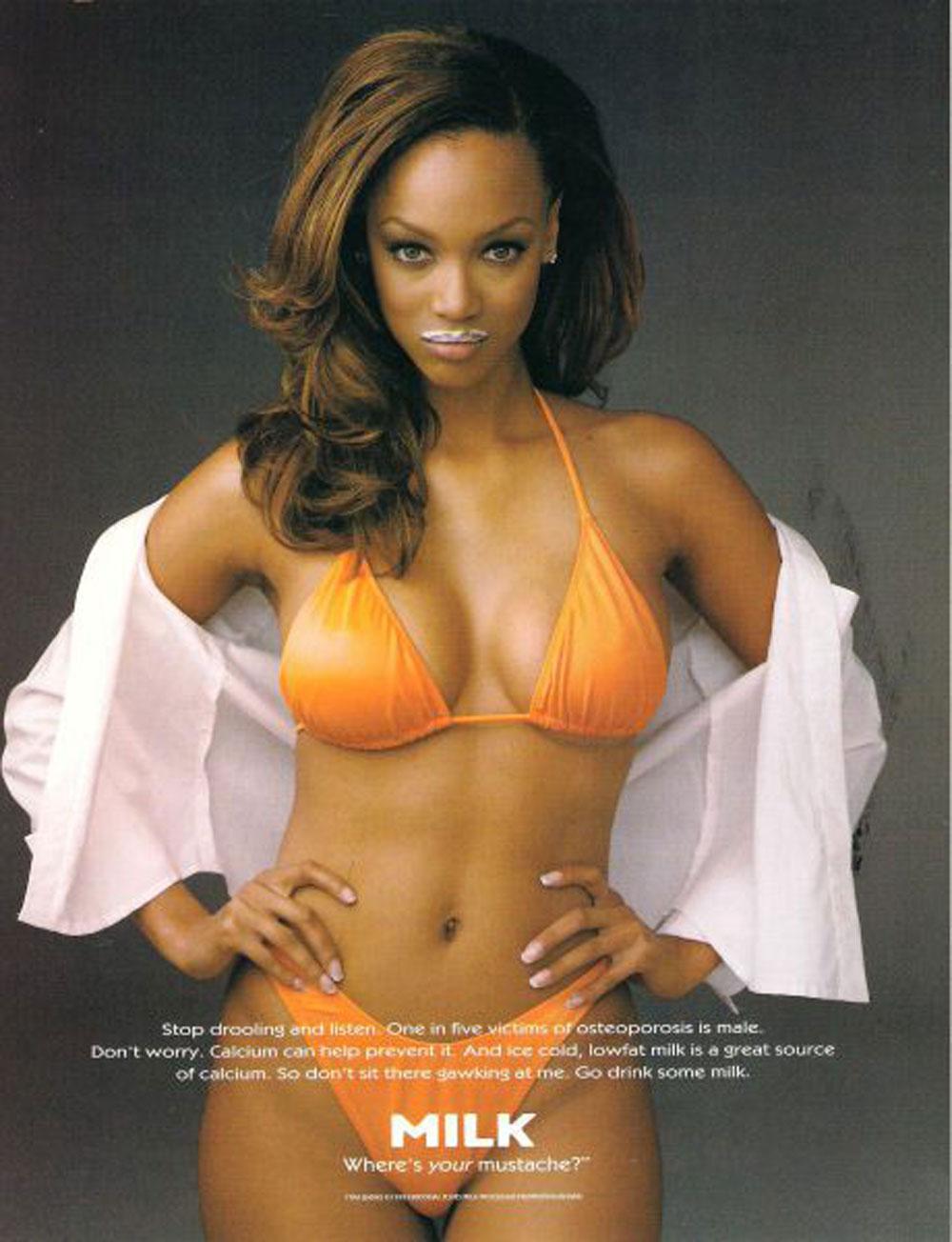 8. Heidi Klum
Klum did the campaign in its later years, when the whole thing was really running out of steam. She looks good overall, but that one with the cow is kind of a lot. Let’s move on, shall we? 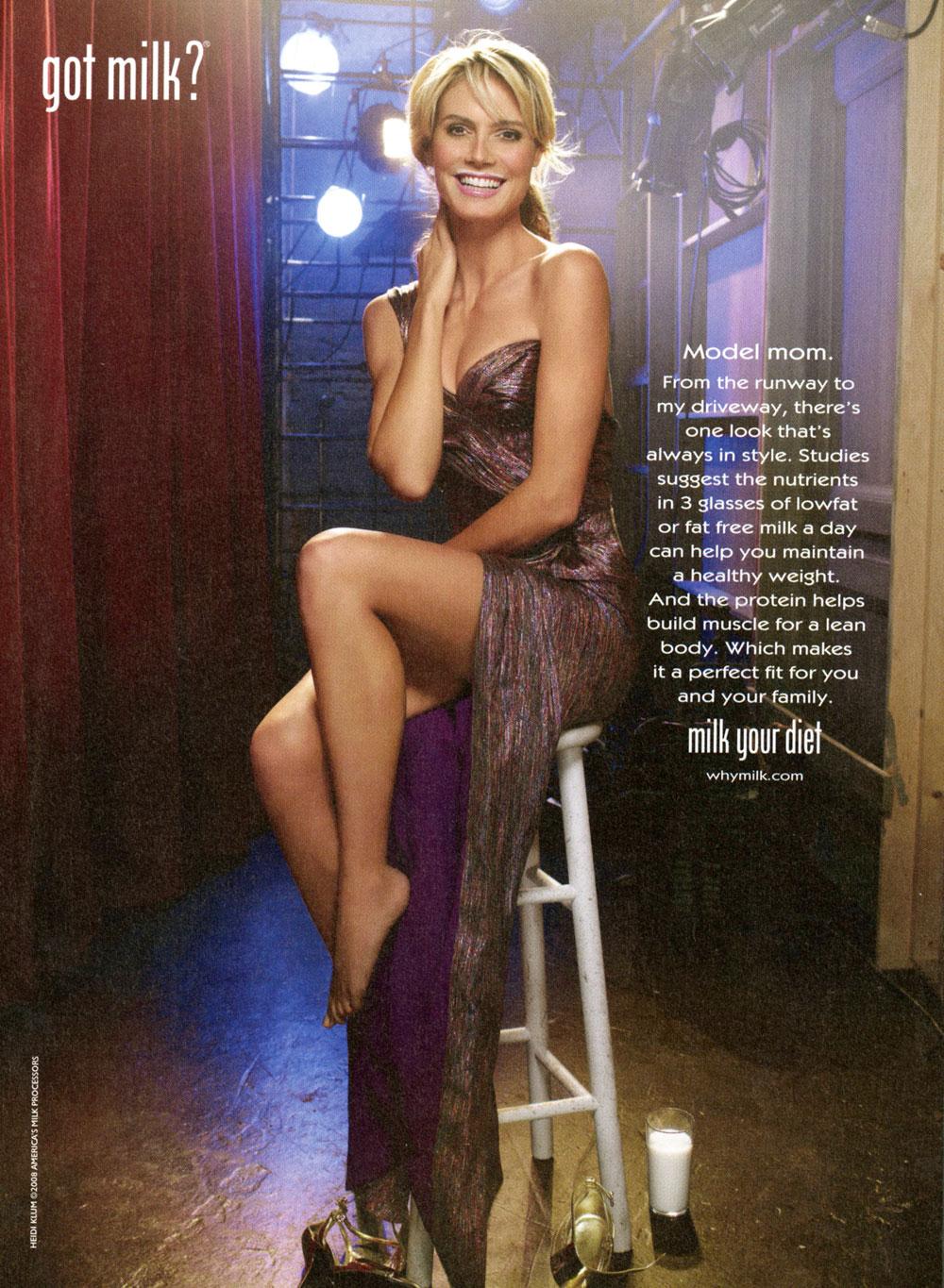 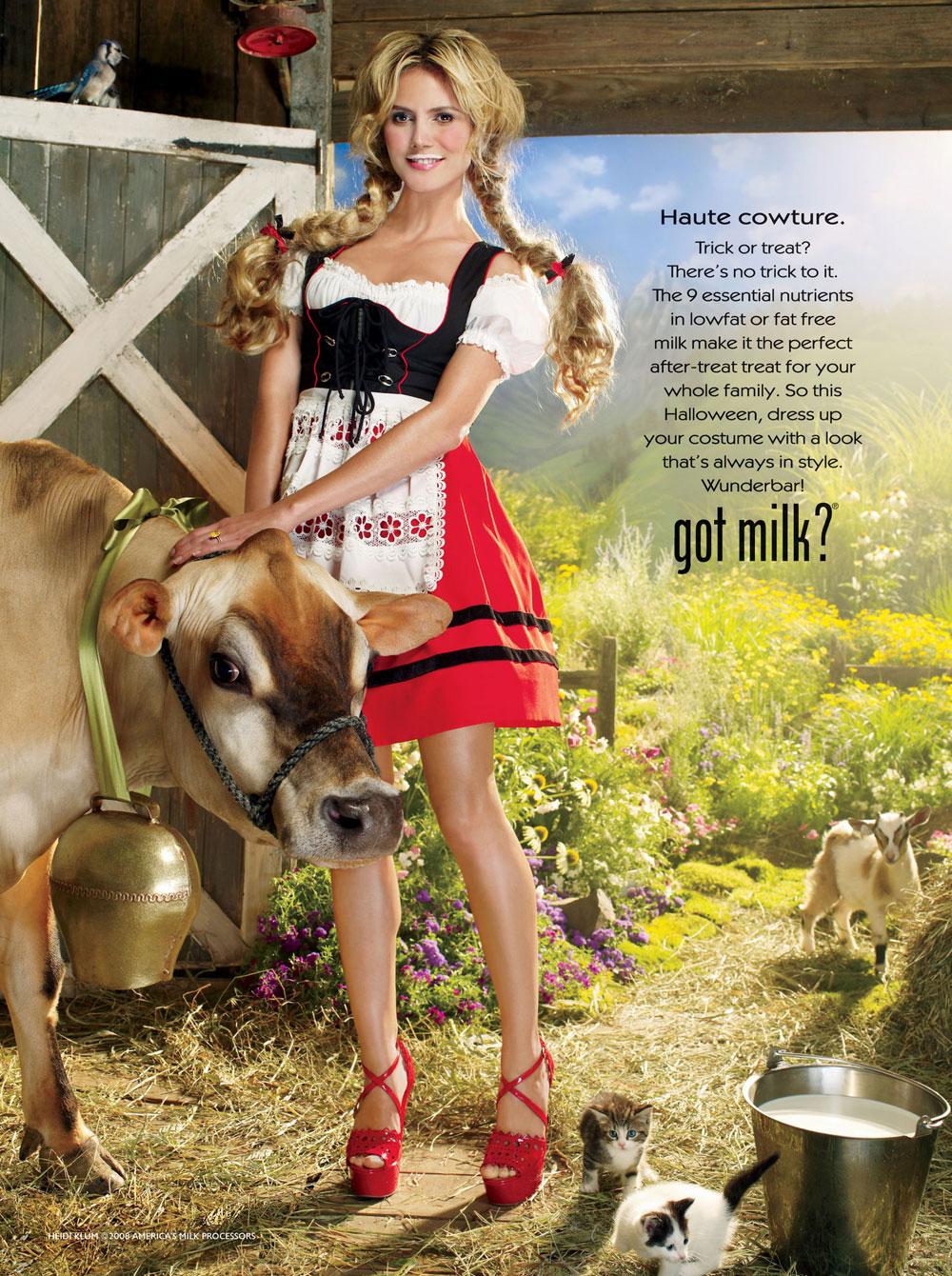 9. Rebecca Romijn
Remember when Romijn was most famous for being a Sports Illustrated swimsuit model? Me neither. No way I’m that old. Oh, god, I feel old! 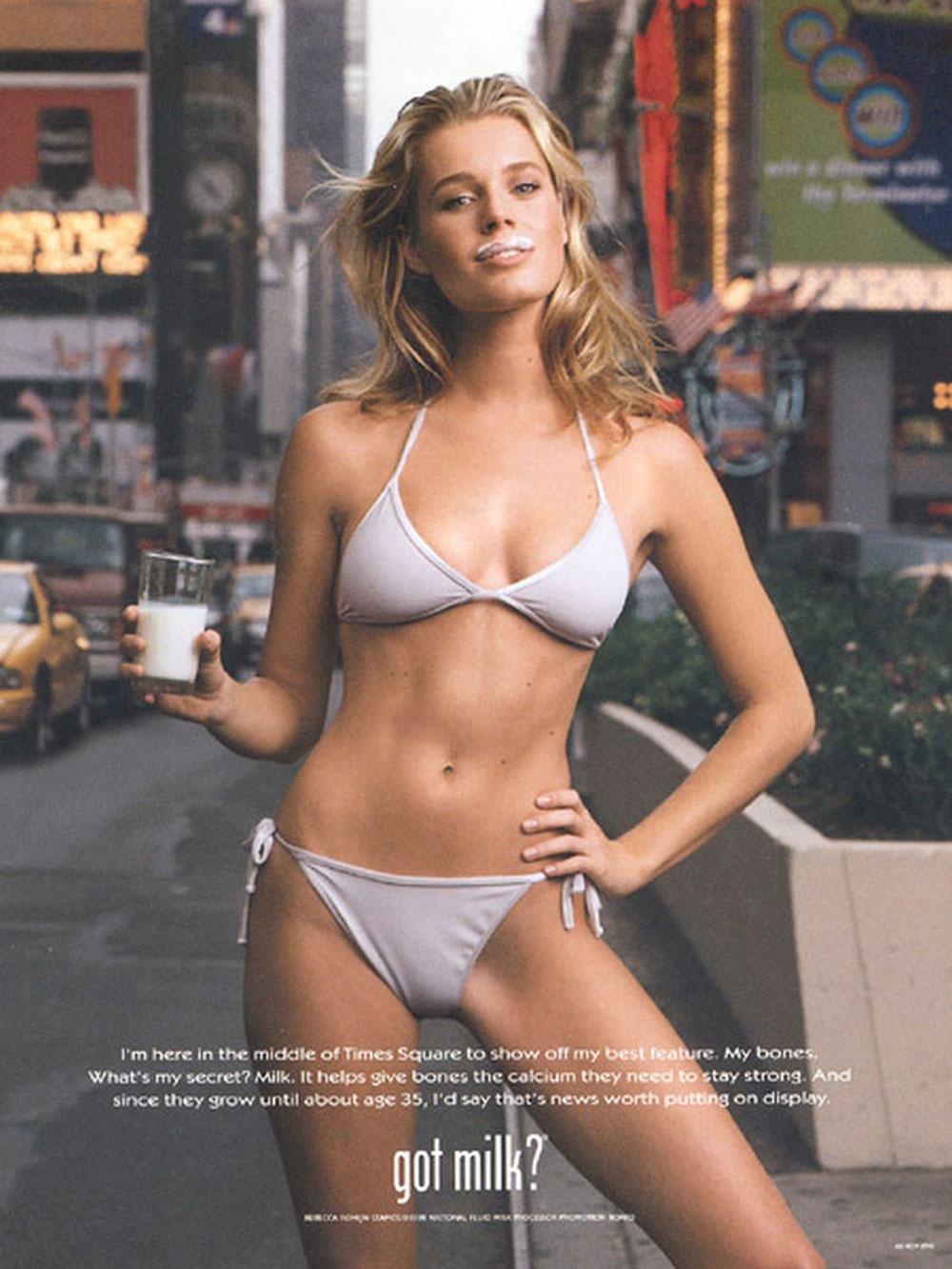 10. Brooke Shields
This is another one from the campaign’s later years. Here we see Shields at her post-Suddenly Susan best. Or maybe the show was still on at this point? Like I said, I stopped dating these ads after number five. I assume it is after the show on account of how dark her hair is. Her hair was lighter on the show. Then again, maybe they’re just between seasons. Although, I do remember her hair being shorter on the show, so maybe this is after it was already off the air. Again, research. Blegh. No fun. If you wanna figure it out, though, please be my guest. 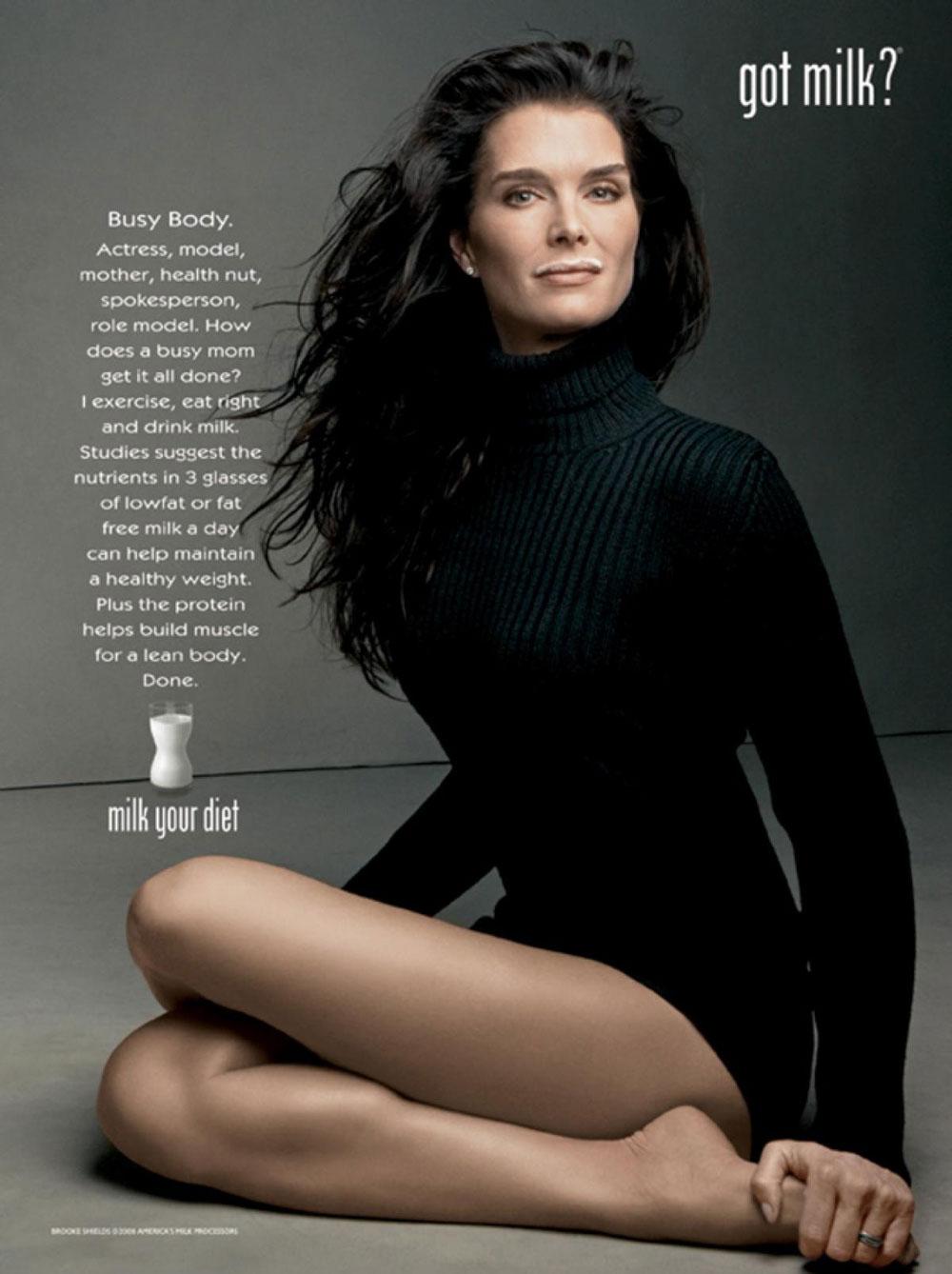 BONUS: Mary-Kate and Ashley Olsen
Not models, but OMG! Too good to pass up. 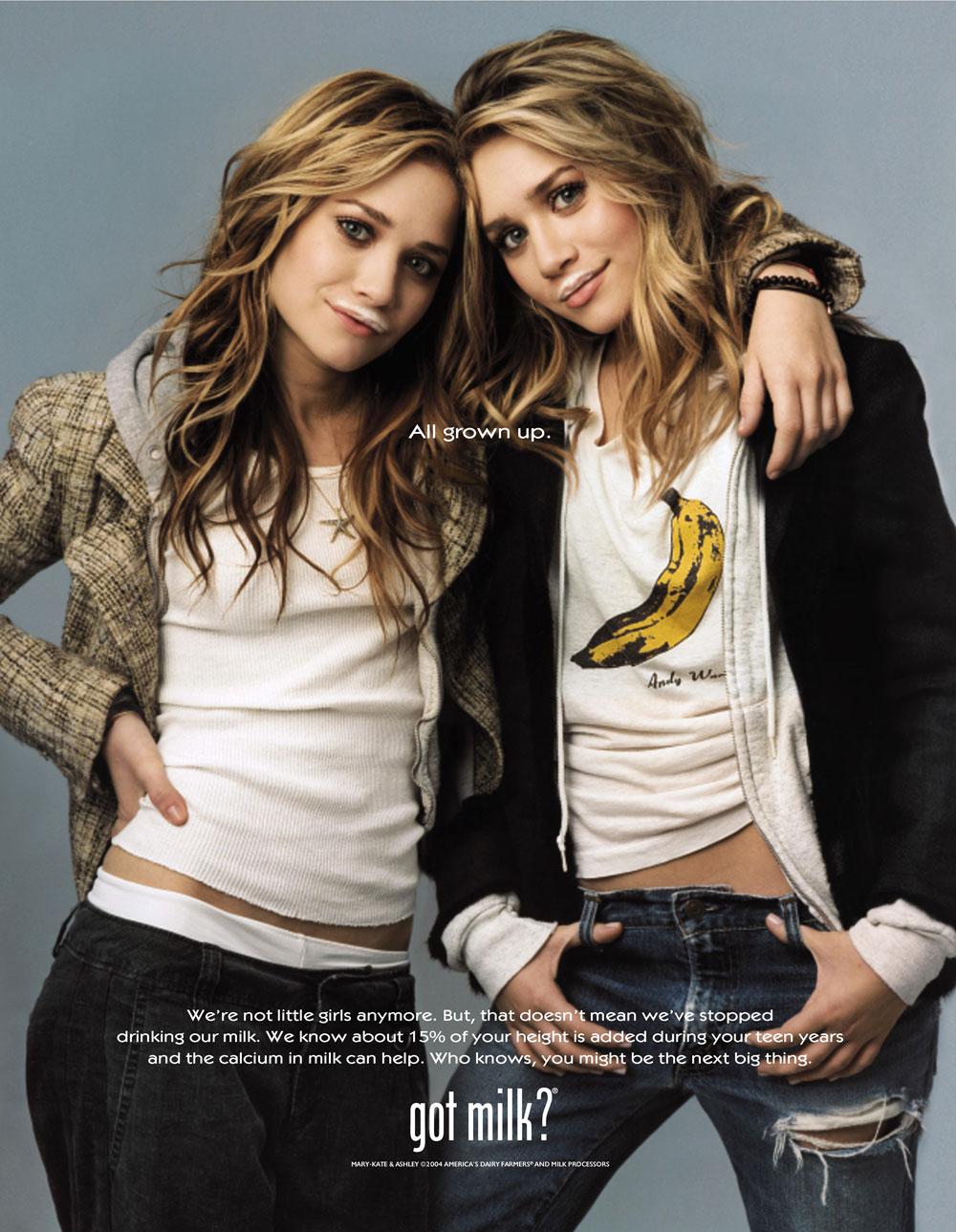