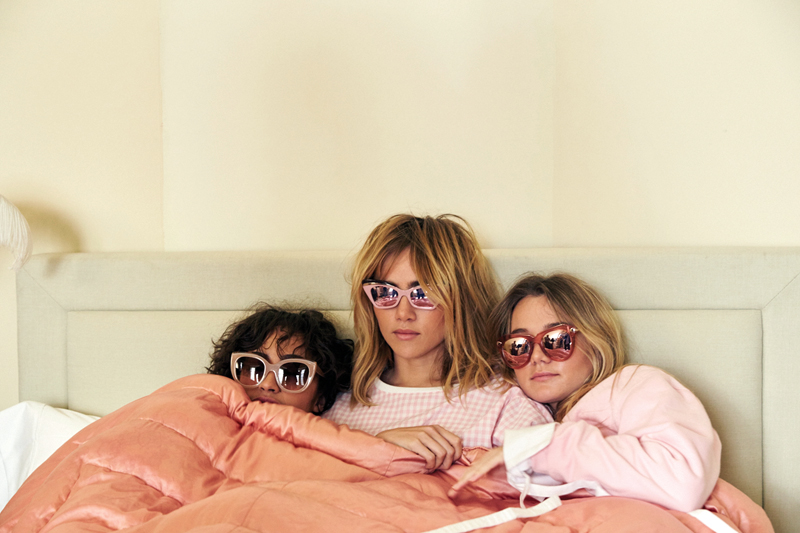 Sibling duo Suki and Immy Waterhouse are both young powerhouses in the world of fashion and film. (Younger sister Maddi is quickly following in their footsteps.) As they shot the Spring campaign for Shopbop, we grilled them on everything from their skyrocketing careers to their closely guarded closets—they still fight over things as simple as a T-shirt. What’s not to love about a little sibling rivalry?

You’re starring in Shopbop’s Spring campaign together. What’s the best part about your sisterly collaboration?
Suki Waterhouse: It’s such a treat! It’s just easy and relaxing, and I get to catch up with her at the same time. I’m very proud of her.

Were you always close?
Immy Waterhouse: Generally, as sisters do, we have our spats.
Suki: But we’ve always been close.
Immy: And we’ve gotten closer as we got older.
Suki: We got closer when Immy got older and became less annoying. [Laughs]
Immy: Actually, as Suki gets older, she gets more annoying. I’m going to kick you for that statement. [Laughs]

What do you fight about?
Immy: I once stole Suki’s bra and she screamed at me.
Suki: We fight about stealing clothes nonstop. Our rooms were next to each other growing up.
Immy: But you have so many clothes you don’t know what to do with them all.
Suki: That’s true—I do appreciate that they get worn.
Immy: Actually, [sister] Maddi is the biggest culprit.

Are you still looking for any suspiciously missing pieces?
Suki and Immy: Yeah [in unison].
Suki: I ask Immy every time I see her, “Where is my vintage black T-shirt?” I know that she stole it to this day.
Immy: I really don’t have it and I told her I don’t have it. You know I would give it to her if I had it, because it’s not worth this badgering.
Suki: It’s the most incredible black T-shirt ever. I’m going to get upset if we keep talking about it.

What kind of music do you like to listen to when you are on set?
Suki: I’m feeling this song called “Fantasy” by Alina Baraz and Galimatias.
Immy: Anything that’s high energy that makes you move your butt! I quite like Frank Ocean.
Suki: Immy’s got a really good playlist, actually.

What do you think about the clothes on set? Favorites, please!
Suki: They’re incredible. I’m so obsessed with Adam Selman. There’s some ridiculously amazing stuff from him, like a long pink dress. There’s the most gorgeous sweater by Preen [by Thornton Bregazzi]. There are amazing shoes by Acne and a pair of sparkled Marni sandals that I’m obsessed with.
Immy: I’m liking the Veronica Beard camouflage jacket with these casual trainers and gray shorts. There’s a great Kenzo hoodie, too.

Are you both big online shoppers?
Suki: I am. I’ve bought vintage Chanel bracelets from Shopbop that I treasure. I love shopping online late at night after I’ve had a glass of wine and then forgetting about it. Then it arrives and I’m so excited. It’s one of life’s great joys.

What are you dying to buy that you haven’t splurged on yet?
Immy: I’m looking for a nice matching tracksuit.
Suki: I’m looking for those Rag & Bone red jumpers—the V-neck one. I’m also dying to get these Alice + Olivia black and white striped pants. I wore them in the shoot. They’re incredible.

What are your most embarrassing fashion moments?
Suki: A few things on Google are absolutely horrific. There are quite a lot of them, to be honest. Sometimes it’s just really bad hair—bad cut, bad color. The mistakes happen when you’re dressing for a red carpet photograph, and it gets a bit out of your hands. I always think things look amazing in real life, and then I’m horrified by the picture.

Immy, what was it like working with Tom Ford on Nocturnal Animals?
Immy: It was amazing. He is the perfect specimen. Every detail is down to a T. It was a really fun and enriching experience.

Were you intimidated?
Immy: Yeah, but in a way that I just wanted to do well for him—not in a scary way.
Suki, did you offer her any acting tips?
Suki: Absolutely not. Immy helps me with my acting.

What have been some of the highlights of your own acting career?
Suki: Going to Venice! The film that I just did, The Bad Batch, won the Special Jury Prize at the Venice Film Festival. It was a huge moment.
Immy: She’s really great in it.
Suki: You haven’t seen it!
Immy: I’ve seen the trailer.
Suki: Immy! [Laughs] Being in a film with Jim Carrey and Keanu Reeves and the rest of the cast was crazy.

Who is your dream director to work with?
Suki: [Quentin] Tarantino.
Immy: Wes Anderson would be cool.
Suki: I’d like to do an action film at some point. I’d like to use my karate skills.

What were your first modeling gigs?
Suki: My first job was for a family friend just before I got signed. They were two young girls who had started a label. We shot in Wales, and it was freezing. On set, they steamed my leg and I was violently burned. I think I got paid 20 pounds or something.
Immy: My first proper was online for Urban Outfitters, I think.
Suki: That was quite nice for you, wasn’t it?
Immy: It was pretty nice. I did a few before that, but that was the first one I remember where I was like, “Ohhh, fashion.”