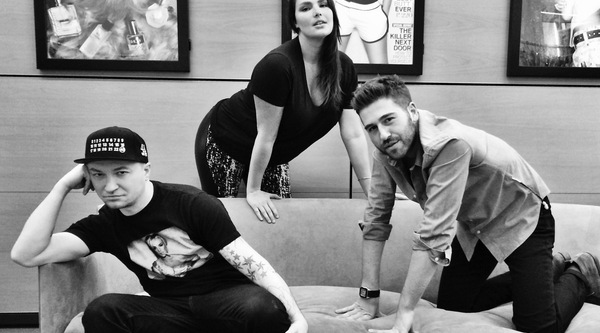 What was Sergio Kletnoy‘s mantra this week? Busy, busy, busy. Regardless, the star assistant to Cosmo’s top brass, Joanna Coles, found time to recreate a Vogue Italia cover with mod Candice Huffine, get up close and personal with Iggy Azalea, and welcome the arrival of Zanna Roberts Rassi’s very fashionable twins…

Throughout the year I dream of the weeks leading up to Christmas, and any week when THE BOSS is out of town. Usually it’s the only time of the year I can take it easy and unwind. A relaxing week for me is one without work-related events, but with plenty of tipsy dinners with friends and endless hours in front of the television catching up on Housewives, Hoarders and RuPaul’s Drag Race. Once again, my social calendar is totally full! I’m sleep deprived, malnourished, and like a hamster inside a wheel, desperately trying to catch up to the endless amount of office work.

JoCo’s calendar looks like a fully completed construction site, consisting of tightly cemented bricks with no space in between them. Each week is filled with yoga lessons, client breakfasts, advertising and editorial meetings, lunches with celebs, politicians, and fashionistas, conference calls, fancy after-work events, late-night dinners, and an occasional night at the theatre. And guess who has to organize all of that? Not Mary Poppins…me!

But JoCo isn’t the only one having all the fun. My week began with the Cinema Society and Gucci Guilty-hosted screening of Marvel’s Captain America: The Winter Soldier at the Tribeca Grand Hotel, followed by the after party at Jimmy at the James Hotel. The Tribeca Grand screening room is tiny and therefore is perfect for my favorite game of spot-the-celeb. This time, I saw Spike Lee, Helena Christensen, Victor Cruz, Nicole Miller, Olivia Chantecaille, Liya Kebede and Samuel L. Jackson, Cobie Smulders, Sebastian Stan, Frank Grillo, and Chris Evans from the film. Unfortunately the best character in the film, the ass-kicking-while-looking-hot-as-hell Black Widow, played by Scarlett Johansson, wasn’t there. I’m guessing ScarJo was busy on another film set or maybe she was just surfing the web, researching mommy blogs, drinking an umpteenth glass of soda from her limited-edition SodaStream machine. Either way, she was missed.

Next up, two of my friends had babies, a day apart! Marie Claire’s Zanna Roberts Rassi, has finally given birth to two girls named Jumo and Rumi. I’m really happy for Zanna and her hubby Mazdack, even though they promised to name their girls Sergina and Sergina Two. Oh well, maybe next time! My BFF Tara and her hubby Scott also had a baby girl, but they didn’t name their baby Sergina, either. They went with Stella, which of course I love. I just won’t be able to say that name without doing my best Marlon Brando in Streetcar Named Desire. Hey Stellllllllllllllla!!!

I also got to hang with stunning supermodel Candice Huffine, who appeared on that iconic black and white 2011 Vogue Italia cover alongside Tara Lynn and Robyn Lawley, shot by Steven Meisel and styled by the extraordinary Edward Enninful. Candice came by the office to visit our model booker Steven, and just for fun, I forced the two of them to recreate that awesome cover. Steven and I did our best to smize for the camera, but ended up looking like two amateurs, and Candice obviously slayed!

The cherry on top was an album listening party at Raven on the Lower East Side for the big booty wonder from down under, Australian rap goddess Iggy Azalea. We had a blast shooting Iggy for Cosmo’s new girls music portfolio and her debut album has been making the rounds amongst all the cool peeps at the office. Most girls at Cosmo are obsessed with Iggy’s style and music, so everyone wanted to be my date. I obliged and brought two of Iggy’s biggest fans, Diandra and Nicole; it was my one good deed for the week. Iggy’s debut album The New Classic is out on April 18th and her latest single “Fancy”, an homage to Alicia Silverstone’s Clueless, is one of the coolest videos of the year!

Until next week, you can catch me on Twitter at @SergioKletnoy and be sure to check out my fave tunes of the week below.

OBSESSED:
“It’s On Again” by Alicia Keys & Kendrick Lamar
“Only Love Can Hurt Like This” by Paloma Faith
“I Will Never Let You Down” by Rita Ora
“Stay In Love” by Plastic Plates & Sam Sparro
“Trouble’s Lament” by Tori Amos
“Days In The East” by Drake
“God’s Whisper” by Raury
“Meet Me In The Pale Moonlight” by Lana Del Rey
“Distance” by Emily King
“Heroes” by Janelle Monae
“Taking Chances” by Sharon Van Etten
“Sister” by Linus Young
“A Taste Of Silver” by Until The Ribbon Breaks
“In Your Shoes” by Sarah McLachlan
“Still” by Katy B

Kaia Gerber Opens Up About Her Mom,...