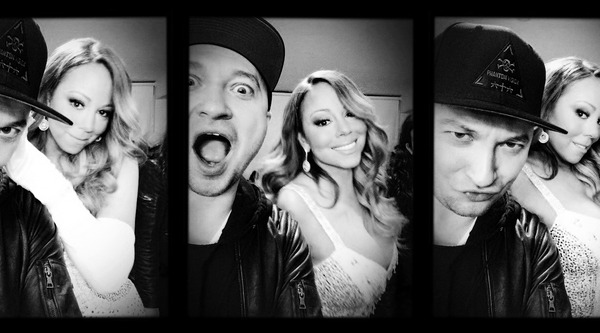 Busy doesn’t even begin to describe Sergio Kletnoy‘s life at Cosmo HQ as of late, thanks to big industry wins for the mag and its EIC (aka Sergio’s boss) Joanna Coles, plenty of planning to tend to, a starry screening, and a Mariah Carey encounter…

A normal person would hope that the amount of work and playtime before and after Thanksgiving would slow down from ‘barely able to catch up’ to ‘feet on the couch with no worry in the world.’ Luckily I’ve never considered myself normal and therefore my last 2 weeks have been jam-packed with enough events to wear out even the energizer bunny. In between finalizing the details for our annual Cosmo 100 luncheon at Michael’s, organizing JoCo’s 467th trip to Washington D.C. (this time for President Obama’s and Joe Biden’s holiday party) and making sure her new Givenchy boots arrived on time, I managed to squeeze in a few major events…

First up was a second special screening of The Weinstein Company’s Mandela: Long Walk to Freedom at the Ziegfeld Theater hosted by U2 and Anna Wintour, with Burberry. The guest list was unreal: Zenani Mandela, U2’s Bono, The Edge, Lenny Kravitz, Iman, Helena Christensen, Tina Brown, Zac Posen, Martha Stewart, Gina Gershon, Chanel Iman, A$AP Rocky, Grace Coddington, Salman Rushdie, Kyle MacLachlan, John Varvatos, Jessica Stam, Theophilus London, Frederic Fekkai, Candy Pratts Price, Andre Balazs, Hannah Bronfman, Frederique van der Wal, Tali Lennox, Madonna’s ex and Lola’s daddy Carlos Leon, celeb lensman Sante D’Orazio as well as the stars of the film, Idris Elba and Naomie Harris. Did I also mention the super exclusive after party was at Le Bilboquet with wall-to-wall celebs? I was there. U2 is my all-time fave band and when The Edge and his wife tapped me on the shoulder and asked to take a seat at a table next to me I almost fainted. That Alexander Wang tee I was rocking while being touched on the shoulder by one of the most famous guitar players on earth shall never be washed again.

Next up was Cosmo winning two Adweek Hot List awards for Hottest Magazine of the Year and The Boss taking home Editor of the Year. I think that makes me The Executive Assistant of the Year!

I also got to hang with torch-song goddess Toni Braxton and one of the greatest singer-songwriter/producers of our time, Babyface. Toni and Babyface gave an incredible performance at the Highline Ballroom, which was taped for an upcoming TV special to promote their new duet album called Love, Marriage & Divorce. I sang along at the top of my lungs to all of their timeless hits and got a sneak peak at their future classics. If you haven’t heard the first single “Hurt You”, which went number one on the charts, you are missing out! The album is set for realease in February, just in time for Valentines Day. After the show I grabbed a late dinner with friends at La Bottega at The Maritime Hotel, where we were seated next to the legendary porn-king Ron Jeremy. I was with five ladies, who were way too excited about a porn star sitting next to them (I won’t mention names, but clearly they are freaks!). And no, I didn’t ask for advice.

Of course I saved the best for last; my one-on-one with Butterfly-MiMi-MC-Mariah-You’re-On-Fire-Mrs-Nick-Cannon aka one of the greatest voices of our time and the true definition of Diva, Mariah Carey. After watching her performance of the greatest holiday song ever (“All I Want For Christmas Is You”) at the Rockefeller Christmas Tree Lighting I was whisked away into Mariah’s dressing room with her manager, Jermaine Dupri and actress, dancer, television director, producer and legendary choreographer Debbie Allen. Hello, this is the woman who appeared in Roots, The Cosby Show, Good Times, Grey’s Anatomy, produced A Different World, and not only acted in, but also choreographed and won two Emmys and a Golden Globe Award for Fame. Back to Mariah, she was everything you expect and more: grand, opulent, magical, sweet, over-the-top and legendary. It felt surreal, but I handled it with grace and confidence. The big question is, which female icon will I meet next?

On that note, I must prepare for whatever next week brings. Fingers crossed my weekend is quiet and eventless. I’ll be back with more next week, until then catch me on Twitter at @SergioKletnoy and enjoy my fave tunes from the last few weeks.

“Colour Me In” by Syron

“The Draw” by Bastille

“I Know” by Tom Odell

“All The Way Home” by Tamar Braxton

“Raised In Rain” by Miriam Bryant

The Good Wife's Josh Charles Is The Man