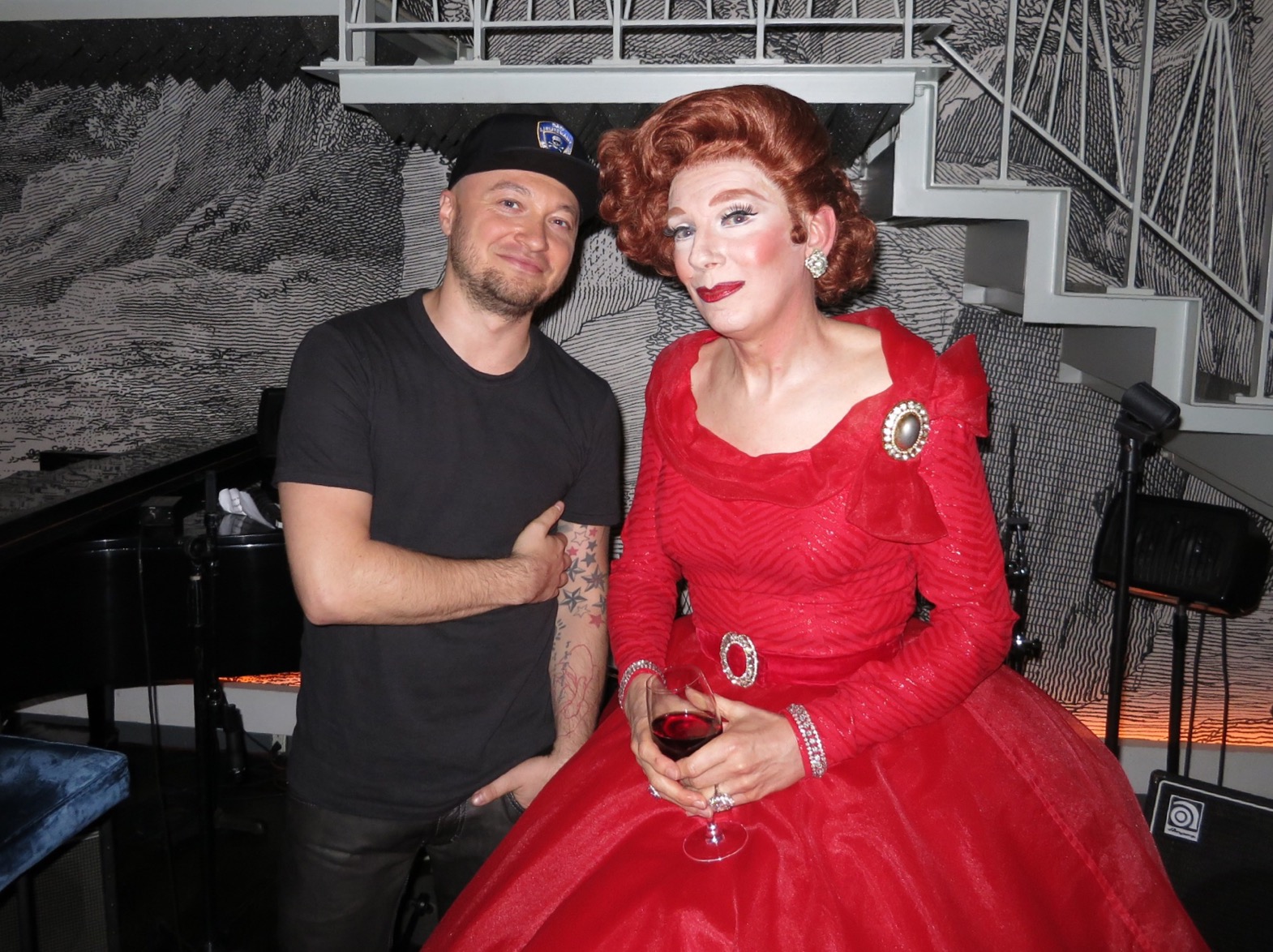 He’s back! Sergio Kletnoy, the right-hand man to Cosmo EIC Joanna Coles, returns with the latest moves from his busy world. This week Sergio’s been getting his culture on with trips to the theatre, movies, and a performance by the legendary Lypsinka. Take it away, sir…

And just like that #NYFW is over and I am back to my regularly scheduled less chaotic life. Within days New York City turned a darker shade of gray, warm sunny days descended into fall and everyone’s barely there outfits migrated to the back of the closet. I for one am not complaining. THE BOSS spent all of last week between L.A. and DC, so I finally had the chance to take a breather and catch up.

I treated myself to a two-hour massage, a few casual dinners with friends and I-lost-count-how-many boozy brunches. And of course there was plenty of entertainment. First up Broadway and the limited engagement of Hanna’s ex on Girls funny man Andrew Rannells as Hedwig in Hedwig and the Angry Inch. Andrew’s killer chops blew me away and his electrifying performance was worthy of two standing ovations. Last time I saw a play, it was Alec Baldwin’s Orphans, which I would rather forget. But Hedwig single handedly erased that experience. Oh, and I also got to a tour of the backstage, posed on Hedwig’s car on the stage and got to meet Andrew after the show. It was major!

Next up was Greenwich Village for a private performance by a singer-songwriter and total bad-ass Elle King at the Electric Lady Studios aka the house that Jimi Hendrix built. Elle’s music is a little bit country and a whole lotta rock & roll, and soul, and blues. Imagine a hybrid of Amy Winehouse, Etta James and Adele. Yes, she’s that good. Elle’s debut album will be out early next year, but you can hear her magnificent new single “Ex’s & Oh’s” right now! Fun fact, her father is former SNL cast member Rob Schneider and she’s is as funny as her dad. It totally runs in the family.

A few days later I was back in the Theatre District for Queen of the Night at the Paramount Hotel. I know, I know, I’m a little late. But it wasn’t just an ordinary evening, I was there for Nick Jonas’ 22nd birthday dinner. #Jealous? A couple of days later I had a visit from the Sierota siblings: Graham, Sydney, Noah and Jamie collectively known as Echosmith. They are an indie pop band who’s super catchy single “Cool Kids” is everywhere. They are VH1’s October You Oughta Know artist, their single was used in the video for Apple’s highly anticipated iWatch push and it’s also #1 on iTunes Alternative chart and top 15 on the singles chart. Add Echosmith to the long list of talented siblings: Kings Of Leon, Jackson’s, Osmond’s, Hanson’s, Heart, Jonas’, Bee Gee’s, Carpenters… Major talent and who doesn’t love a singing family?

The next day I ended up in Chelsea for the Cinema Society screening of Universal Pictures’ A Walk Among the Tombstones starring Liam Neeson as a former NYPD detective out for blood of criminals and kidnappers. Tombstones was a lot like Taken and Taken 2, only based in New York and not as edge of your seat terrifying. Calvin Klein, Donna Karan, Seth Myers, Paul Sorvino, Andy Cohen, Bruce Weber and Adam Lambert were all among the guest at the premiere and after party held at the Top of the Standard and I’m pretty sure with Liam Neeson there everyone felt pretty safe since he is really good with a gun…

The day after the premiere I ended up at Duane Park (a jazz and burlesque restaurant) in the East Village for cocktails and a drag-a-licious performance from one of the greatest drag artists in history –John Epperson as Lypsinka. The character of Lypsinka is said to be based on the Tony Award winning singer and actress Dolores Gray and 1950’s glamorous model Dovima, but she’s so much more than that. Imagine the best of Joan Crawford, Debbie Reynolds, Ann-Margret and Bette Davis, but snappier, funnier and a lot more entertaining. Lypsinka’s shows are a work of art, as all of the dialogue is pieced together from Hollywood movies, ringing telephones, and classic songs. For the last three decades Lypsinka has entertained audiences around the world, appeared on the Joan Rivers show, stole the thunder of major supermodels with a hilarious cameo in George Michael’s “Too Funky” music video, walked the Parisian catwalks for Thierry Mugler, appeared in GAP ads, played the wicked stepmother in NYC Opera’s 2004 production of Rodgers and Hammerstein’s Cinderella and gained Madonna, Morrissey, and Sandra Bernhard as fans. I’ve been dying to see Lyp in person ever since I first saw that infamous appearance on the Joan Rivers show and meeting all these years later was a thrill. Lypsinka loved the fact that I work for Cosmopolitan, the house that Helen Gurley Brown built and I offered a tour of the Hearst tower whenever time permits. In the meantime, you MUST get tickets while you still can and catch Lypsinka The Trilogy at the Connelly Theater in NYC from November 5 – January 3. This performance is not to be missed and I’ll see you there!

“Ghosts” by Made In Heights

“You Haunt Me” by SIR SLY

“All About You” by Hilary Duff

“Guts Over Fear” by Eminem & Sia