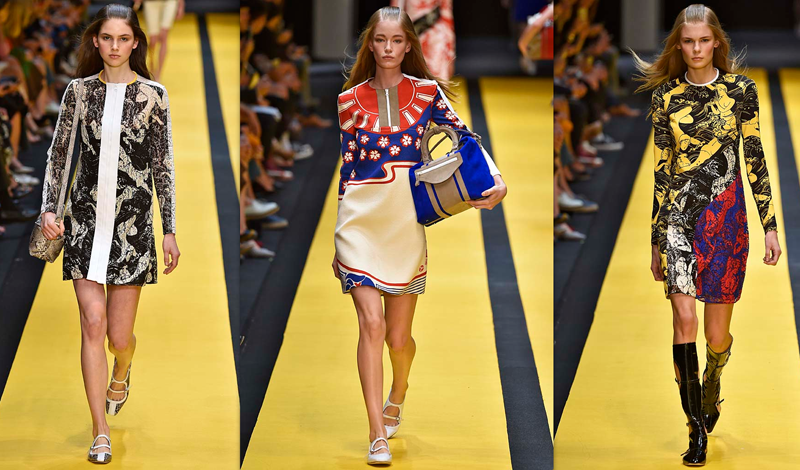 At Guillaume Henry‘s show for Carven at the Grand Palais, the models marched out very rapidly, practically flying down the runway. It was energetic, albeit a little difficult to capture a great social media shot (quite the editor’s predicament these days…). What ensued were ’60s silhouettes like A-line dresses, zip up coats with sharply pointed collars, leisure suits, and so on.

But it was the prints that really popped. “They’ve been inspired by vintage postcards from Japan,” said Henry backstage. “It’s very authentic in a way, but we tried to turn them into something more graphic. Fittingly, next door to the show venue, giant posters advertised an upcoming exhibit for the 19th century Japanese artist Hokusai. The prints will be those instantly recognizable hits that Henry seems to churn out season after season. Remember that bubble gum pink coat you saw everywhere from his Fall 2013 collection? Or how about those dresses and tops with arrow embellishments? The latter were seen on no less than 10 girls ar the show. It’s this knack for creating pervasive pieces that’s made Carven grow so quickly as a brand. To top off the collection, nearly every model carried a giant bag cupped in one arm, just like all of the editors here that arrive to the Paris shows with helmets in tow. How French!