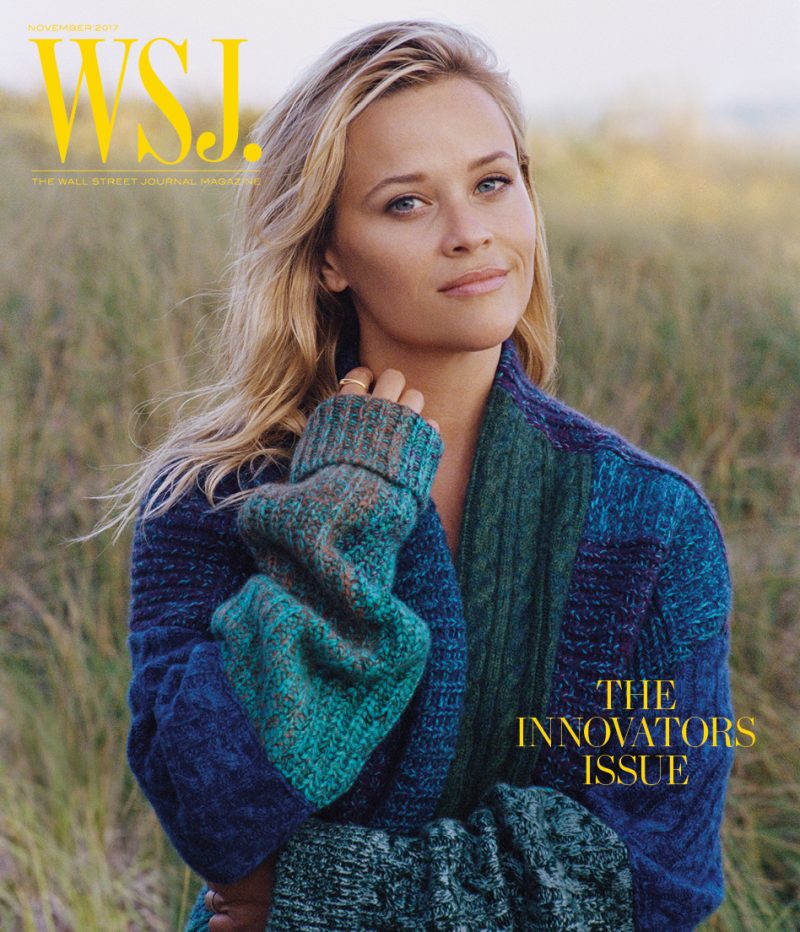 Reese Witherspoon landed the cover of WSJ. magazine’s Innovators Issue, which hits newsstands this Saturday, November 4. The actress, producer, and entrepreneur, who was shot by Cass Bird and styled by Elissa Santisi, looks positively radiant in a series of photographs featuring the petite blonde in various shades of sky to midnight blue. Witherspoon has become a serious powerhouse in recent years thanks to her acclaimed HBO series Big Little Lies (16 prime-time Emmy nominations and an Emmy for outstanding limited series), her production franchise Hello Sunshine, and her growing southern-lifestyle brand Draper James. (She was also recently named part of Vanity Fair‘s 2017 New Establishment list.) Below the actress divulges a few things about herself to writer Derek Blasberg that illustrates her rise to the top.

On confidence:
“I know I’m good at things,” she says. “And I’m over being bashful about it. Do basketball players have to sit there and act coy? Tell me something: Does LeBron James twiddle his thumbs and say, ‘Jeez, I’m kind of great at shooting, and I guess I’m OK at dribbling and passing’? No, he’s like, ‘I’m amazing! I rock!’ I wish more actresses had that kind of bravado.”

On ambition:
“I was never going to be an actor who lives in their car because their dream was so big. [If acting didn’t work] I would have gone from Stanford to medical school and become a surgeon. Right now, I’d probably be the premier surgeon and pediatric cardiologist at Vanderbilt University,” she says, pausing. “What? I’m just being honest. I’m ambitious, and I’m over hiding that.”

On the impetus for creating her own production company:
“He told me every actress in Hollywood wants one of these parts,” she says. “There were [roles for] two women, and they were both deplorable, disgusting, horrible.” (She refuses to identify the film but says it was theatrically released.) Witherspoon was smack-dab in her mid-30s, a time when talent and even ambition aren’t always enough in the movie industry for women. “I thought, This is my line in the sand. We women are too talented to be fighting over roles like this.”

On her iconic character Elle Woods:
“At least once a week I have a woman come up to me and say, ‘I went to law school because of Legally Blonde,’ ” she says. “It’s incredible.” Not that she’s surprised by Woods’s allure: “You can be unapologetically feminine but also smart and driven.”