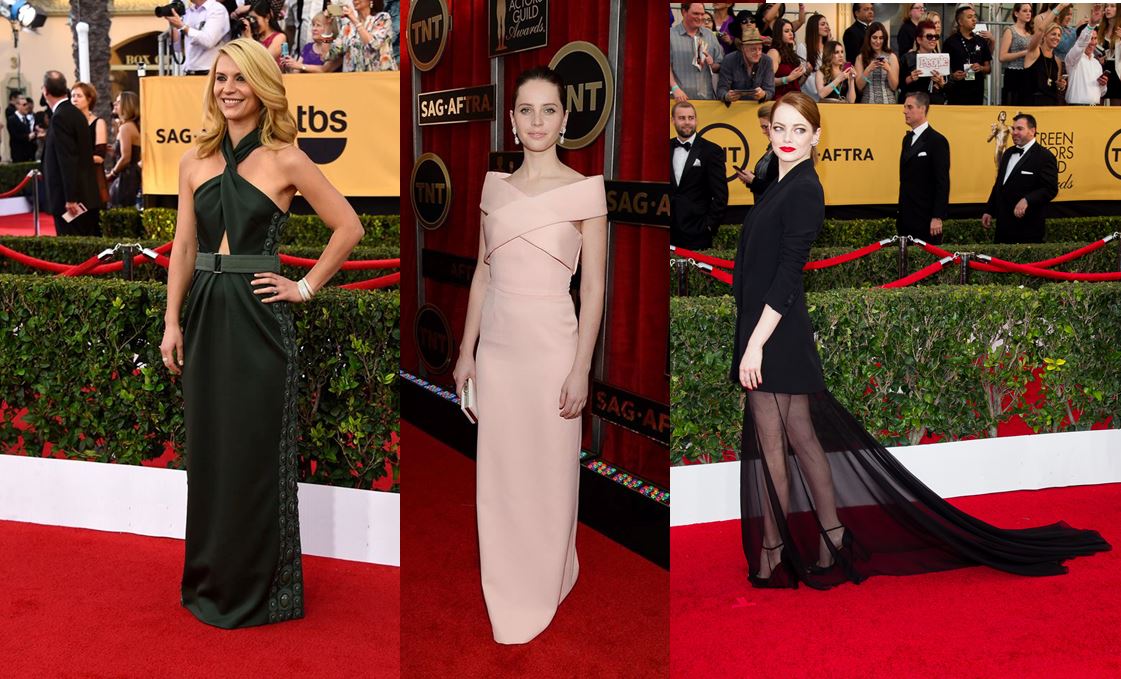 Last night Hollywood was inundated with yet another rush of chic tapis rouge gowns, dresses, and jumpsuits for the 21st annual SAG Awards. This time around, the crowd had some fun with their frock choices, and as a result, the step-and-repeat scene was filled with bright colors, unexpected details, and plenty of glitz. The carpet was also filled with starlets donning young, contemporary designers. A very pregnant Keira Knightley upped her game on this red carpet donning a lovelyy purple Erdem frock that flattered more than her Golden Globes look while Julianna Margulies, who rarely has a red carpet fail, wore cobalt blue Giambattista Valli dress with a dramatic skirt that looked très chic on the fair skinned beauty. But those that opted for traditional black still made an impression. Joanne Froggatt stunned in a dramatic black dress from Honor, and Julia Roberts wore a tuxedo jumpsuit by Givenchy that mimicked her look in the brand’s Spring 2015 ad campaign.

On the patterned front, Lupita Nyong’o went for both stripes and florals in an Elie Saab number, while Rashida Jones wore and eye-catching black and white floral gown with blue piping from Emanuel Ungaro. From the vintage vaults, Jennifer Aniston chose a golden John Galliano number, paired with long, loose locks and a very low neckline. We’d have to go with Felicity Jones in a pale pink Balenciaga frock with a stunning criss-crossed neckline accented by Van Cleef & Arpels drop earrings as one of the eve’s best-dressed, and Claire Danes‘ unexpected Marc Jacobs gown is a close second, featuring a twisted halter neckline and an abdomen-baring cutout. And how could you not love Emma Stone’s Dior Haute Couture tuxedo meets gown dress? It was another unusual look from Dior for Stone following up on her crystal encrusted jumpsuit from the Golden Globes and she owned both looks. Let’s hope some stunning Oscar looks are in the works, darlings!

Naomi Watts in Balenciaga with jewels by Bulgari

Kiera Knightley in Erdem with jewels by Repossi