Poppy Delevingne Splashes Into Swimwear With A Solid & Striped Collaboration 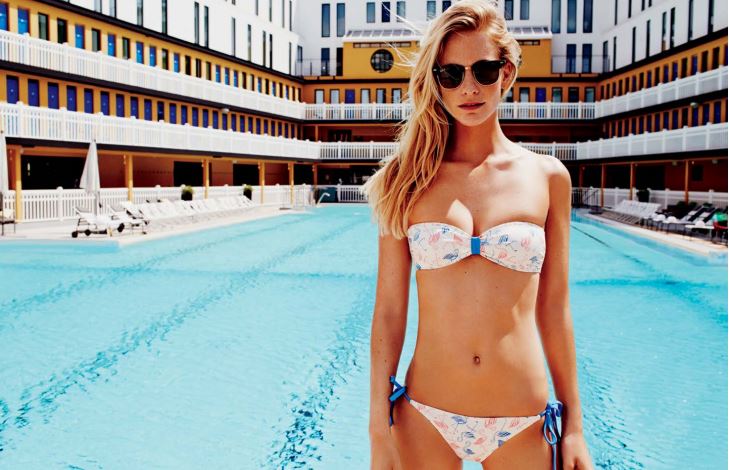 Leave it to Poppy Delevingne to make your upcoming holiday travel a touch chicer. The model put her bikini knowledge to good use via an exclusive collaboration with swim label Solid & Striped, which is now available at Net-A-Porter. Dotted with flamingos and topped off with touches of pink and blue, this collection is bound to make lounging in the sun much more colorful. We’ll let Delevingne and Solid & Striped founder Isaac Ross explain it all…

Where did this collaboration start and how did it all come together?
Poppy Delevingne: A great friend of mine gave me a Solid & Striped bikini at the beginning of the year, back when I was living in L.A. during pilot season. Out there, bikinis are my uniform. Then I had my bachelorette party at Coachella, called Popchella, where I gave all my friends Solid & Striped bikinis as gifts. After the bachelorette party, a friend of mine introduced me to Isaac, and we met over breakfast. Within seconds of sitting down, we were discussing the potential idea of doing a collaboration. It was amazing.
Isaac: This is the first collaboration Solid & Striped has done and the reason I was so excited to collaborate with Poppy is because she has this fun vibrancy, playfulness, and energy to her. Plus, if you look at her on social media, you know she’s a traveler. Often we see her photographed in a bikini. I wanted to work with someone who had a real opinion on this topic, because I wanted it to feel like a true collaboration. I wanted Poppy to give us her expert input, and that’s exactly what she did.

The collection was inspired by the movie True Romance. Poppy, how many times have you seen the movie?
Poppy: I’ve watched it the same amount of times I’ve watched my own wedding movie, so probably about 50 times. I’m what you call a little obsessed.

Did you make Isaac and the rest of the Solid & Striped team watch the film before the design process?
Poppy: No, but I’m pretty sure they’ve seen it already!
Isaac Ross: She wouldn’t have to force me to watch it anything that Quentin Tarantino is involved in. Although maybe we should have a little screening of it; that’s a great idea!

Why are there so many flamingos in the collection?
Poppy: I’ve always been obsessed with flamingos. When people ask me what my spirit animal is, I always go with flamingos. I slightly look like one, and I love the color pink! And then it also goes along with Patricia Arquette’s character in True Romance, because she’s kooky and kitschy and she likes things in bubblegum pink and with palm trees. We could see her in one of these bathing suits in the movie.

Tell us a little more about the shoot’s location, Piscine Molitor?
Poppy: It’s one of the oldest swimming pools in Paris.
Isaac: The pool has an incredible story; it was actually where the first bikini was ever modeled. For the last 25 years or so it’s been completely rundown, but recently a group bought it and redeveloped it. We were the first brand to shoot at the new iteration of Piscine Molitor.

Speaking of the first bikini, is there an iconic swimsuit that stands out to you?
Poppy: Princess Diana, sitting at the end of the diving board over the Mediterranean. She was wearing a turquoise, low-cut back swimsuit. It’s such a classic picture; it was so ’80s.

What’s your favorite piece in the collection?
Poppy: I was actually walking around my hotel room last night in the bikini. Now I’m really obsessed with it, but it was the one silhouette I didn’t really love in the beginning. It’s kind of magical and helps out ladies who lack in the breast department, such as myself! I love it so much that I think I’ll wear the bikini every single day, winter or summer…

Do you have any upcoming vacations where you’ll be wearing your bikini designs?
Poppy: Well, I’ll be heading out to Art Basel in Miami, so I’ll be wearing the bikini there. I’m also going to Colombia over New Year’s with some friends, so we’ll all be hanging out in the collection, head-to-toe.

Do you have a preference for solid or stripes?
Isaac: That’s like choosing a favorite kid. I can’t choose!
Poppy: You must! You’re the solid and I’m like the stripes, baby.
Isaac: Alright done, that’s it.

Diane Kruger Weighs in on Thurman and...